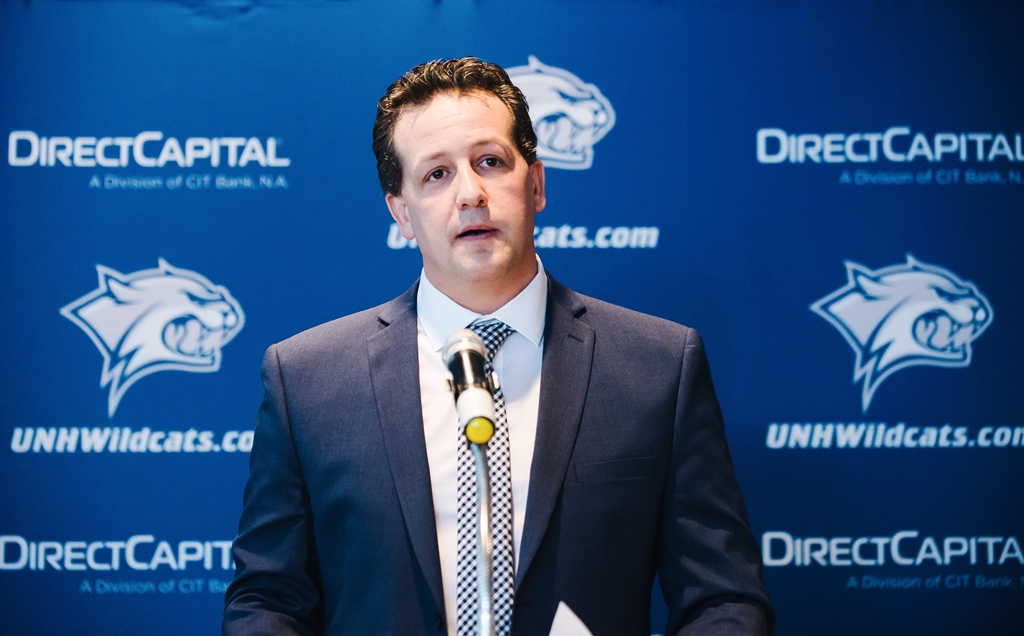 Durham, NH — On March 3rd, the legendary career of UNH Head Coach Dick Umile came to an end. His New Hampshire Wildcats fought their ancient rival, the Maine Black Bears, to a bitterly contested end. It symbolized the soon to be 70 year old coach perfectly. He was a hard-nosed, old-school competitor who gave everything he had to his game and team, but fell just short of winning the biggest prize, with the biggest heartbreaks coming against Maine. Ultimately, Dick Umile retires as one of College Hockey’s most accomplished coaches. He spent 28 years as the face of UNH Hockey. He won seven Hockey East Conference Regular Season titles, two Hockey East Tournament crowns, reached the NCAA Tournament 18 times, including 10 consecutive trips from 2002-2011. His teams reached four Frozen Fours and played in two National Championship games.

Umile won 596 games, 10th most in the history of the sport and ahead of legends like Dean Blais, Shawn Walsh, and John MacInnis. He won the Bob Kullen Award as Hockey East’s best coach a record 6 times, and won the Spencer Penrose Award as the nation’s best coach in 1999. He will be remembered as a legend in the sport and a classic competitor.

Alas, his career is now over and the reigns of UNH Hockey are now in the hands of Umile’s protégé, Mike Souza. Souza played under Umile in UNH’s glory years in the late 1990’s and early 2000’s. Souza’s graduating class of 2000 is the winningest in UNH’s storied history and he was one of it’s best players. In 156 games, the Wakefield, MA, native totaled 66 goals and 90 assists for 156 points. His most important goal came in the 1999 National Championship game when he beat Alfie Michaud to tie the game and force overtime against Maine. While the Wildcats lost the game, it is regarded as a seminal moment in UNH Hockey’s history. Communications Director Mike Murphy said it best: “It was a goal that you remember where you were and where you were sitting when it happened.”

After his collegiate career, Souza played in the AHL, several European leagues professionally, and for the Italian National team at the World Championships. It was in his late years playing when he determined coaching would be his profession after playing. In 2011, Brendan Whittet gave the new coach his first job as an assistant at Brown University. In his final year, Souza helped Brown on a memorable run to the ECAC Championship game, where they fell just short against Union College.

Following this run of success, Mike Cavanaugh called on Souza to be an assistant at UConn in the transition from Atlantic Hockey to Hockey East. The Huskies made the transition and established themselves as a Hockey East contender with Souza at Cavanaugh’s wing. However, Cavanaugh did not intend to keep Souza in Storrs. “Mike’s goal for me was to become a head coach”, Souza explained. “He wanted me to be the head coach at UNH after Dick (Umile) retired. And for that, I’m grateful.”

True to form, in 2015, Mike Souza was hired by his alma mater as Associate Head Coach. Umile was considering retirement and UNH’s future after his tenure. When discussing potential successors with Athletic director Marty Scarano, the two settled on Souza as the only one they’d ever consider a succession plan for. “I don’t think transition plans are a good idea most of the time.”, Scarano explained. “But I think it will be successful in our case. I think in his three years here, he got up to speed with us. It’s not like he’s a new coach from Minnesota who needs five months to get up to speed on us. He is UNH Hockey.”

In Souza’s three years with UNH, the Wildcats have hit hard times. The records have been 11-20-6, 15-20-5, and 10-20-6 and the highest standing finish was 10th in Hockey East. Yet, there were successes. Andrew Poturalski and Tyler Kelleher were Hobey Baker nominees in 2016 and 2017. UNH won a playoff series in 2017 at Merrimack and pushed eventual Hockey East Champion UMass Lowell to a third game in the quarterfinals. And this year saw Benton Maas and Max Gildon establish themselves as star defensemen and lead the best penalty kill in the conference. There is plenty for Souza to work with to lead UNH back to national prominence. Those are his standards.

His former boss at UConn, Mike Cavanaugh, said “No one can ever replace Dick Umile, but the University of New Hampshire made an excellent hire in Mike Souza. Mike’s affection for the University and the hockey program is commensurate with Coach Umile’s. I’m very confident Mike will lead the program with competence and professionalism that will make the University and its alumni proud.”

Former teammate Patrick Foley said “I think Mike has a high level of understanding and feeling when it comes to dealing with players. Mike always has been very concerned with making sure his players have the right frame of mind. He’s always reaching out to them and making sure they know he’s there for them. That was always one of Coach Umile’s strong traits that gives me confidence in Mike now. He’s a great people person and he cares a lot about his players. That’s why I think he’s a perfect fit for UNH.”

The goal is for Durham to be the most feared place in Hockey East again. With Mike Souza at the helm succeeding Dick Umile, that goal is certainly within reach.