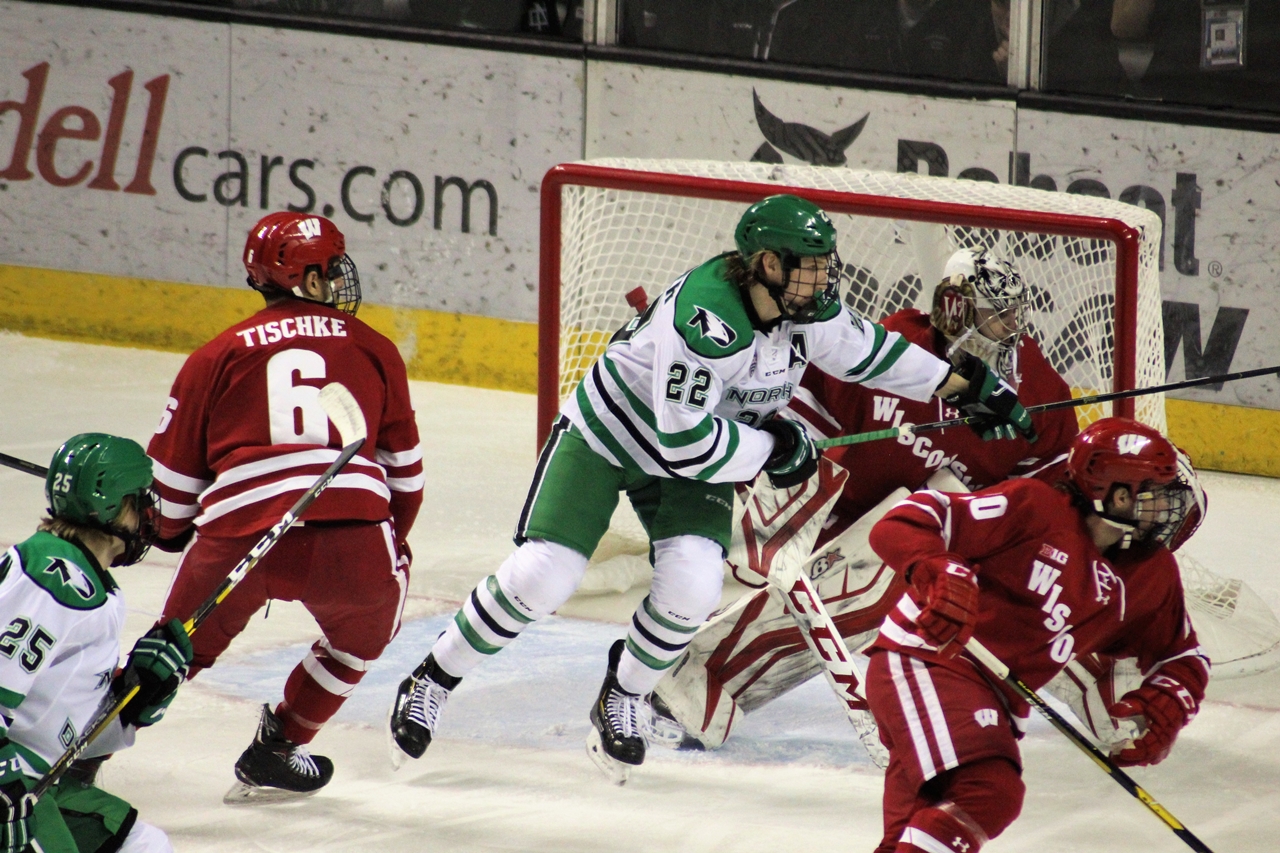 On Friday night, the University of North Dakota hockey team beat the University of Wisconsin, 5-0. UND was led by senior forward Rhett Gardner. The rugged forward scored his first three goals of the season, propelling the Fighting Hawks past the Badgers. Let’s take a look at Gardner’s evening.

(Originally posted at the Sports Daily)

Here’s goal number one. Garnder blasts the puck past Wisconson goalie Jack Berry. The Wisconsin defense doesn’t challenge Gardner in the slot and the rugged forward cashes in. 1-0 UND.

Rhett Gardner gets @UNDmhockey on the board just three and a half minutes in for his first goal of the season!#UNDproud @TheNCHC pic.twitter.com/zyorRHlRyc

Here’s goal number two, good things happen when you go hard to the net. Gardner uses his big body to get to the front of the net and deposits a pass from Colton Poolman to expand UND’s lead to 3-0. How about Poolman, the junior defenseman has three goals and four points in the last two games.

Rhett Gardner scores his SECOND goal of the game just half a minute into the 2nd to put @UNDmhockey up 3-0 against Wisconsin.#UNDproud @TheNCHC pic.twitter.com/2owfTuoVix

Finally, Garnder buries goal number three to finish the hat trick. Another shot, unmolested, from the top of the slot to give UND a 5-0 lead.

Rhett Gardner makes its THREE goals on the night as @UNDmhockey extends its lead to 5-0 over Wisconsin in the 3rd!#UNDproud @TheNCHC pic.twitter.com/5XuhR1nIf2

Last season, missing the NCAA playoffs didn’t sit well with the UND hockey team. Gardner and his teammates have used that experience to help them improve this season.

During the season-opening hockey media day, I asked Gardner about that experience. What did they learn?

“I think obviously being hungry this season is easy to do for everyone because no one likes the way we felt last year,” Gardner said. “I think the big thing we have to do is learn from last year.

“(Last season) there were a lot of games we had leads that turned into ties and losses. When you only play two games a year, those (losses) come back to haunt you at the end of the year. We need to learn from those experiences. I thought last year, at times, we struggled with managing games and managing pucks late in games. Moving forward, the biggest thing is to learn from those mistakes.”

After Friday’s game, head coach Brad Berry had nothing but nice things to say about Gardner.

“He’s one of our captains,” Berry said. “He came in his freshman year and was a big impact in our national championship year. Over the course of four years, he’s the lifeblood of our program here in the fact that he plays in all situations. One thing about Rhett Gardner, I said to the guys after, in the locker room, composure and discipline is going to be a big thing in our game. When Rhett Gardner is playing composed, disciplined and hard, good things are going to happen.”

Speaking of playing with composure.

Over the years, Garnder has been known to take his fair share of penalties. Gardner has 184 PIM in 118 NCAA hockey games. During the season-opening exhibition game against Manitoba, he took four minor penalties.

“I had a couple of bad breaks on stick penalties and I got tied up with a guy in front of their bench,” Gardner said. “Hopefully, those are out of the way for the rest of the season, no more.”

In game one against Minnesota State, Gardner was assessed a five-minute major and a game misconduct for checking from behind. That mistake cost UND. Since that game, Since being kicked out of the Mankato game, Garnder has played disciplined hockey. Garnder hasn’t seen the inside of the penalty box. Not once.