NEW YORK – As defenseman Dylan McIlrath skated back to the bench in the final second of the first period after serving a five-minute penalty for fighting, the entire Rangers bench stood and banged their sticks against the boards as a sign of respect.

Moments later, the horn sounded to end the first period as the capacity crowd at Madison Square Garden showed its respect for a dominant first 20 minutes during which their heroes out-attempted the St. Louis Blues 27-13 and outshot them 15-4 despite a lineup missing four of its’ top six defensemen.

The Blues took control in the second and the teams played an up-and-down third period filled with momentum swings, before the undermanned Rangers (5-4-2) lost 4-3 to the Blues (7-3-1)  in a shootout. The mostly-spirited effort left coach Alain Vigneault singing his team’s praises.

“Our first period tonight was one of the best ones that we’ve played — from [the] defensive side to moving the puck and generating some offensive chances,” Vigneault said. “The third period and overtime I thought we really gave ourselves a chance to win the game. Put the foot on the gas and played hard. Had to come back, had the lead, they’re a good team. We battled real hard tonight.”

Due to the injuries running rampant on the backline, the Rangers were forced to dress second-year pro Conor Allen, 24, and the 6’5”, 220-pound McIlrath. While the big guy struggled in limited ice time, Allen, playing his fourth-career NHL game, played a steady 13:03 for the Rangers.

“It’s the best level you can play in,” McIlrath, 22, said after his third-career game in the big leagues. “Obviously the jump [from the AHL], you can tell there’s a difference. There’s more than just the speed. The skill level, and positioning, it’s all better at this level.”

“They were good,” said Dan Girardi, who skated a team-high 32:58, the second-straight game he’s played over 30 minutes. “Both played confident, made some good plays. I was impressed.”

“Experience is a big thing in this league,” said Marc Staal, who played 26:33. “It takes some time, especially as a defenseman, to hone your game and figure out what you can and can’t do out there.”

The two youngsters were forced into action following injuries on Saturday to Ryan McDonagh (separated shoulder, out 3-4 weeks) and Kevin Klein (foot contusion, being re-evaluated in 3-4 days). Dan Boyle (broken hand) is still on the mend, and John Moore continues to serve out his five-game suspension, he’s eligible to return Nov. 11.

After their strong first period, the Rangers gave themselves a chance to win thanks to a terrific final 25 minutes, including an overtime during which they outshot St. Louis, 6-2. They thought they had the winner 45 seconds into the extra session, but Rick Nash’s chance from Martin St. Louis rang off the post.

“I feel really good out there this year,” said St. Louis, who scored two third-period goals for his first multi-goal effort as a Ranger. “Obviously you want results as a team, and you want results individually. This is a good team we played tonight. We handled it pretty well. Some of the guys got called up, some of the guys got called upon to play more minutes. We battled, unfortunately we didn’t get the extra point. We definitely had looks to get it, we just didn’t.”

After Vladimir Tarasenko won the game for the Blues in the shootout, the Rangers were left with a perhaps-unfair sour taste in their mouths.

“They all feel bad,” St. Louis said of the loss. “There’s a lot of positives you take out of tonight, but this is a game of results. You’ve got to find ways. We didn’t. We had plenty of opportunities in overtime, we just didn’t get it.”

“It’s just frustrating when you lose in a shootout,” Girardi said. “There’s no other way around it. We had some great chances in overtime, would have been nice to get one there on the power play [to begin overtime]. Having the lead, giving that up, it’s frustrating. We had chances to win the game in regulation, we just didn’t do it.”

“We’re playing some solid hockey right now,” Vigneault said. “At the end of the day, this is about winning hockey games. I think we’re taking steps in the right direction in the very early [part] of the season.”

Forward Mats Zuccarello (undisclosed) also missed the game. He was seen limping at the team’s training center on Sunday, and is day-to-day. Ryan Malone, who cleared waivers on Monday afternoon, played in Zuccarello’s spot.

The Blues have earned a point in each of their last nine games at Madison Square Garden, dating back to Jan. 20, 1998. They’re 8-0-1 over the span.

The Rangers scored two goals in the third period, giving them 16 third-period goals this season, tied for the most in the NHL.

END_OF_DOCUMENT_TOKEN_TO_BE_REPLACED 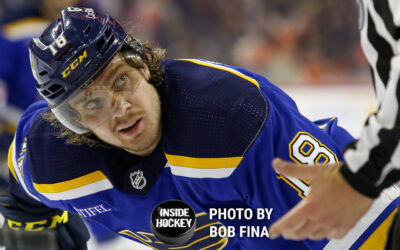 The St. Louis Blues hit the skids early in the season with a franchise record eight losses in a row. However, the tide is turning for the Blues as they are “hot” again and in the midst of a solid four game win streak-all on the road.