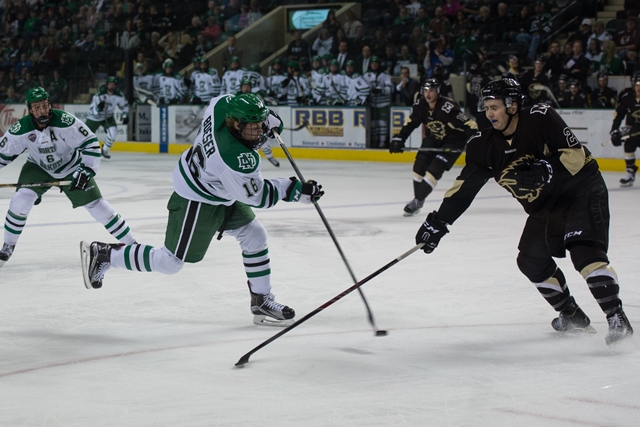 Last season, one the strengths of the University of North Dakota hockey team was the play of their defense. In the offseason, UND lost three of the top-six defenders to the NHL. While losing three high-end players like Troy Stecher, Paul LaDue, and Keaton Thompson would usually decimate most D-corps, UND is having success in the early on.

Through three games, UND has limited the opposition to 42 shots on net. That’s an average of 14 shots per game. Last Saturday night, Fighting Hawks forward Austin Poganski had the same number of shots (11) as the entire Canisius College hockey team. Incidentally, that was the fewest shots on goal allowed by UND since March 16, 2008, against Michigan Tech Huskies. (Game 3, WCHA First Round).

Fast forward to Saturday night, UND followed up that stellar defensive effort by holding Rensselaer Polytechnic Institute Engineers to a meager 14 shots on goal. Three of those shots were on the power play. Statistics aside, it’s very early in the season, and UND’s schedule to date hasn’t been very tough. However, at the same time, the Fighting Hawks defense has only given up three goals against and ranks third nationally in defense.

“We didn’t get the start we wanted, but our guys responded again, head coach Brad Berry said. “I thought giving up 14 shots, we did a pretty good job defensively. “I think it’s a mentality – a way of playing away from the puck. It’s a mindset that offense starts with the puck and if you don’t have it, and you gotta get it back.”

Another concern coming into the 2016-17 season was secondary scoring. UND lost three of their top-five scorers including 2/3 of the CBS line left in the offseason (Drake Caggiula graduation and Nick Schmaltz signed with Chicago). If UND is going to be successful during the 2016-17 campaign, someone is going to have to step up.

Through three games, UND has scored 15 goals on 118 shots. The Fighting Hawks are putting 12.7 of their shots in the twine. In the early going, the younger players are making the most of their chances.

A tap of the stick to Joel Janatuinen, who had his first career hat trick for @UNDmhockey in a 5-2 win against RPI tonight. pic.twitter.com/4zbvP7OPCV

One of those young forwards making the most of their chances is Joel Janatuinen. Saturday against RPI, the sophomore from Espoo, Finland, had a career night scoring a hat trick. Janatuinen’s effort helped lead the Fighting Hawks to a 5-2 victory against the Engineers. Janatuinen was paired with forwards Ludwig Hoff and Austin Poganski. That trio had a great night on the score sheet recording three goals and six points.

From the Stats Department

Through three games sophomore, forward Brock Boeser has one goal and seven points. Last season, Boeser didn’t score a point until the fourth game of the season when he had a hat trick against the Bemidji State Beavers. Last night, Boeser recorded a single assist to bring his season points total to (1g-6a—7pts).