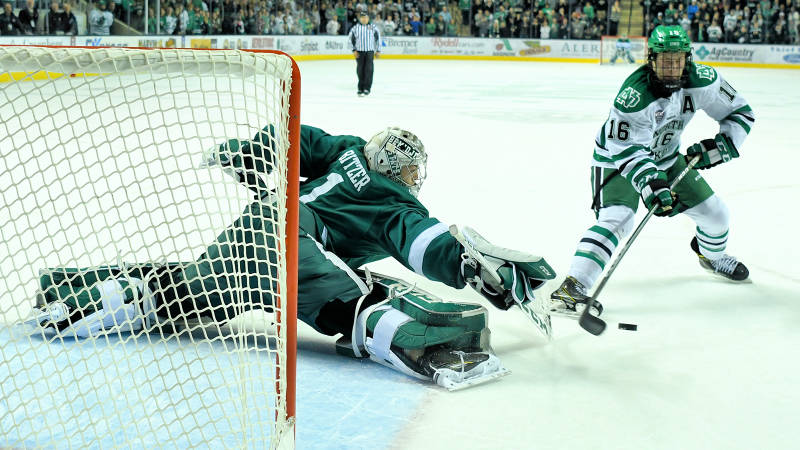 Almost every season, the Bemidji State Beavers and the University of North Dakota Fighting Hawks play a two-game non-conference series. Every time these two teams play it’s a war. Time and space on the ice is a premium.

Sweeps against the Beavers have been tough to come by. In the last three series, UND has a 3-1-1 record against BSU. During those six games, there have been no series sweeps. Not a single one. The Beavers play a tough game and they’re very hard to beat in back-to-back games.

Friday night was no different. True to form, the Beavers would come out of the gates on fire. They were playing on their toes and winning all of the 50/50 battles. For most of the first period, the speedy Beavers had the Fighting Hawks on their heels. Before the game was 10 minutes old, the Beavers built a two-goal lead with markers from Philip Marinaccio and Brett Beauvais.

Again, not the start UND wanted.

The Fighting Hawks came out a step slow in the first period and chased the game for two periods of play. Then, in the second period, the Hawks finally got the momentum to swing their way.

“We started chasing the game a little bit,” coach Berry said. “We got into penalty troubles. I thought our puck decision were a little sloppy early on. When you have a combination of both those it’s tough to get into a flow. I thought we got it back as the game went on. We have to make sure that we put this in the bank and we have to learn when the puck drops you have to be ready to go.”

“I thought they came out hot and had us back on our heels,” Johnson said. “That team always play well. They’re a real good team, they’re a quality opponent. I don’t think we were up to par to start.”

In the third period, the Fighting Hawks controlled the majority of the play. The forward line of Shane Gersich, Tyson Jost, and Boeser spent the majority of their ice time in the Beavers end of the ice. At the 12:52 mark of the third period, Leo Fitzgerald was called for hooking Boeser on a breakaway. Looking at the replay of the Fitgerald hook, UND was probably given a gift. If you’re a Beaver fan, the game-winning goal isn’t going to sit well with you. BSU head coach Tom Serratore declined to comment on the penalty that led to Boeser’s game-winning penalty shot goal.

“Honestly, I didn’t even think there was a penalty called,” Boeser said. “I didn’t feel a hack or anything. But I’ll take it.”

After coach Serratore reads Boeser’s quote, he’s probably going to be even more upset with the call.