This season, the University of North Dakota Hockey team has been notorious for its slow starts on Friday night’s.

Coming into Friday’s game against the Denver University Pioneers, UND had a (6-6-1) record on Friday nights.

On Saturday nights, UND is almost perfect going (13-0-1).  The only blemish, a non-conference 2-2 tie to Providence.

Denver would score the first goal of the game at the 07:20 mark of the second period with a snipe from Joey LaLeggia. Seven minutes and 13 second later, junior forward Drake Caggiula would knot the game at 1-1 with a beautiful snipe.

UND would outscore the Pioneers 3-1 in the third period with two goals from Michael Parks and Nick Schmaltz.

After the game, Head coach Dave Hakstol appeared to be suffering from a severe head cold and had a tough time talking.

“I thought we played really well right from the drop of the puck,” Hakstol said with a hoarse voice. “I thought both teams played very well. It was pretty good paced. I thought we had the better of the opportunities in the first half of the game. It was a great hockey game.”

“(You’ve) got to give a lot of credit to our coaching staff and having us ready off this bye week,” Parks said. “It’s not an easy thing to do even though we’re well rested. They gave us a game plan for Denver and I think we executed pretty well.”

With Friday’s win, coach Hakstol has had 11 straight 20 win seasons. That’s the longest active streak in division I hockey coach. Hakstol has also made the NCAA playoffs each year during his 11-year coaching career. UND seems destined to make the NCAA tourney again this season. 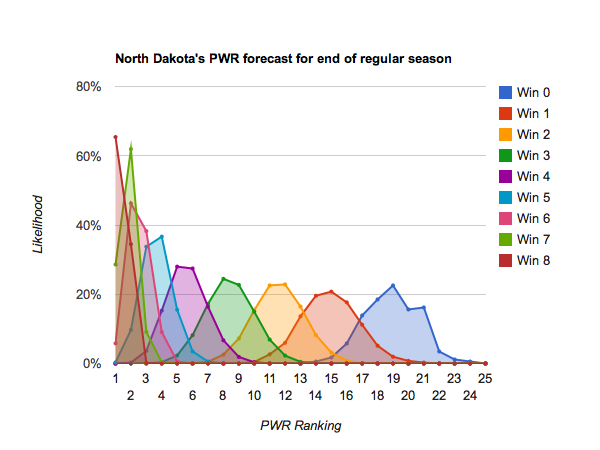 UND and DU will play in the series finale tonight at 07:07 pm CT.