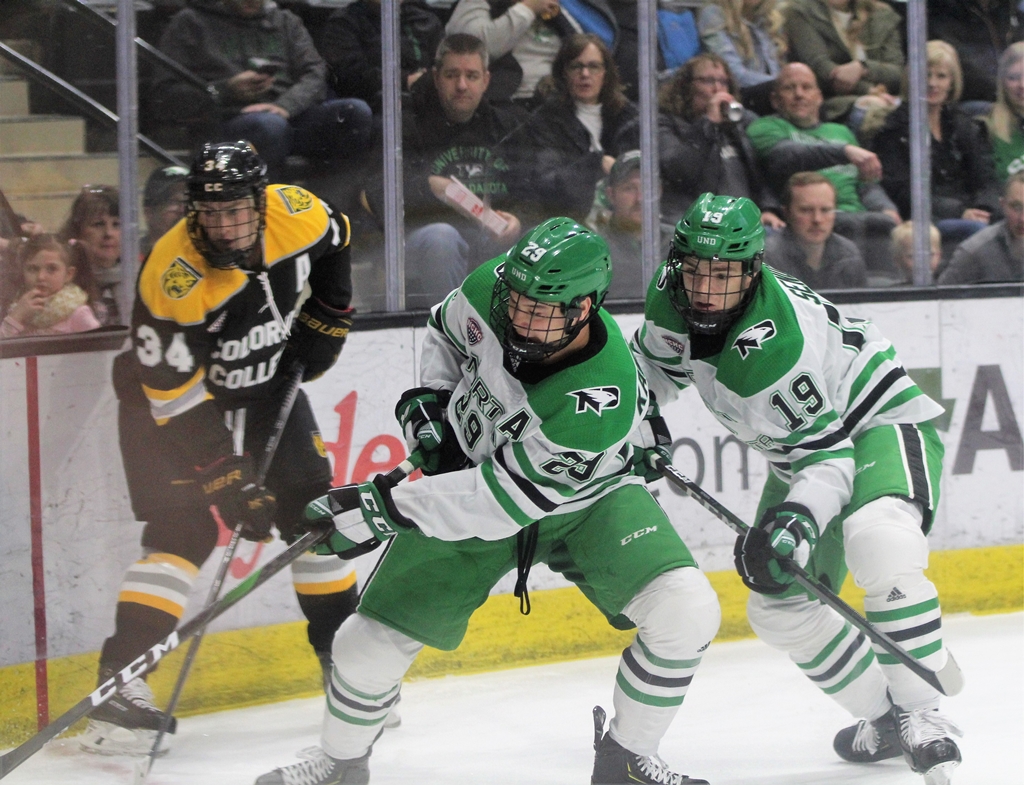 Grand Forks, ND – The National Collegiate Hockey Conference is a tough conference and some have said the league’s regular-season trophy should be a meatgrinder. On Friday night, the last-place Colorado College Tigers gave top-ranked North Dakota all they could handle.

Saturday night, it was a much different story. The Hawks came out of the locker room on fire. They flew through the neutral zone with ease and raced to a four-goal lead before the game was 15 minutes old.

After scoring a total of eight goals in the last three games, the Hawks put eight goals on the scoreboard to send the Tigers home pointless. The Hawks righted the ship by taking out their frustration on the scoresheet. They scored four in the first period, two in the second period, and two more in the third period.

It was an impressive win.

When it was all said and done, 13 players recorded at least a single point. Five players had multi-point games: Andrew Peski (0g-3a—3pts), Jasper Weatherby (1g-1a—2pts), Grant Mismash (1g-1a—2pts), Collin Adams (1g-1a—2pts), and Jordan Kawaguchi (2g-1a—3pts). UND’s top forward line of Mismash, Adams, and Kawaguchi continued their torrid pace as they scored (4g-3a—7pts). They were also a plus-12.

“Peter is awesome, it’s not always easy, being out for a while and coming back in when you’re called upon,” Peski said. “He did a really good job and it showed he had a great night last night a great night tonight.”

“For a guy that hasn’t played a long time, he looked confident, he looked composed,” head coach Brad Berry said. “Didn’t look like there was any nervousness. I think that’s usually an attribute that you have from not playing for a while. Karl (Goehring) worked with him on staying with it. In practice, getting him the reps, and then obviously waiting for his opportunity. You know he was ready for it. We’ve got to keep moving forward with both goaltenders.”

“Yeah, the Senden line is awesome,” Peski said. “You got Schmidt that’s just a horse. Sendo and Gavin that just work really hard and we know whatever top line that they have they’re going to tough night because those guys are just relentless.”

“They’re a workhorse line, Smitty, he works the hardest I’ve ever seen, and Sendo (Mark Senden) is one of the hardest workers too,” Kawaguchi said. “Gavin (Hain), he’s got the most skill on that line, and he’s such a hard worker too. Those three together, unbelievable. I wouldn’t want to play against them.”

UND is off next weekend and returns to the ice on February 13-14 against the Denver Pioneers.