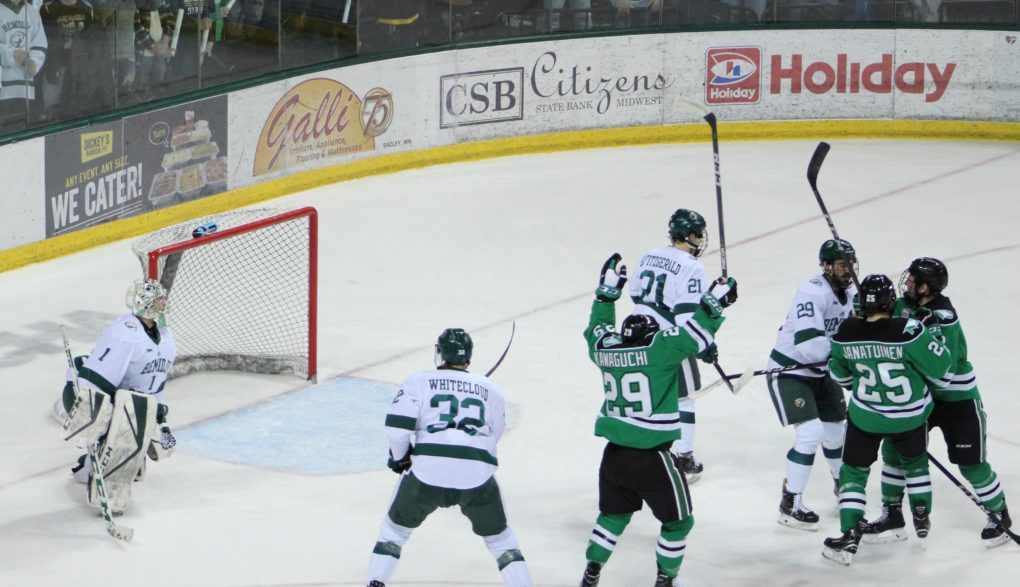 Bemidji, MN – University of North Dakota head coach Brad Berry has talked about getting quick starts and being ready to play on the drop of the first puck. On Friday night, the Fighting Hawks took their coach’s words to heart scoring 18 seconds into the opening period to give UND an early 1-0 lead. It looked like UND would be off to the races.

The Fighting Hawks took flight in the second period and started to take the game over. UND kept grinding and working hard and hit pay dirt again at the 11:30 mark with a goal from UND junior forward Nick Jones.  From there on out it was all North Dakota, they never looked back.

Later in the second period, the Fighting Hawks would increase their lead to 3-1 when Poganski would score his second goal of the game at the 14:26 mark.

VIDEO: Austin Poganski scores his second goal on the night on the power play and gives @UNDmhockey a 7-0 late in the 3rd period. #UNDproud @TheNCHC pic.twitter.com/JC40KqXi8E

UND would start the third period off with a power-play goal from Jones (his second of the game) at the 01:33 mark. Make that 4-1 North Dakota. The Beavers played catchup most of the night and couldn’t find a way to break through.

With about 3:20 remaining in the third period, Beavers head coach Tom Serratore tried to spark his team by pulling senior goalie Michael Bitzer. The gamble failed for the Beavers as senior forward Trevor Olson buried his first goal of the season into the empty net. A relieved Olson was all smiles after the game.

“Oh my God it feels great,” Olson said. “Obviously, getting that first one off of your back is good. Especially when I was struggling early.”

“Coming out with that first shift and scoring a goal, that’s big,” head coach Brad Berry said. “We talk about the first five minutes of a game in this building being an important part of it, and it was. I thought they made a push after that. I thought we got better as the game went on. Especially in the second half of the second period. We started to grind a little bit and posses pucks and get some opportunities in their end of the rink.”

The Fighting Hawks are much better on Saturday night going 6-2-3 (.681). On Friday night, coach Berry’s team came in waves and played the perfect road game. For once, the Fighting Hawks set the pace instead of chasing the game.

With the 5-1 win on Friday, UND is well on its way to getting the non-conference sweep. Jones broke down the game into segments.

“We carried the momentum over from last Saturday over to tonight, Jones said. “Fridays haven’t been good for us, but we were able to come out flying. I thought each period… we had a goal obviously in the first. The second there, he had a real hard shift – first shift and then the third we had a goal on the power play. It was good starts that carried us through each period.”