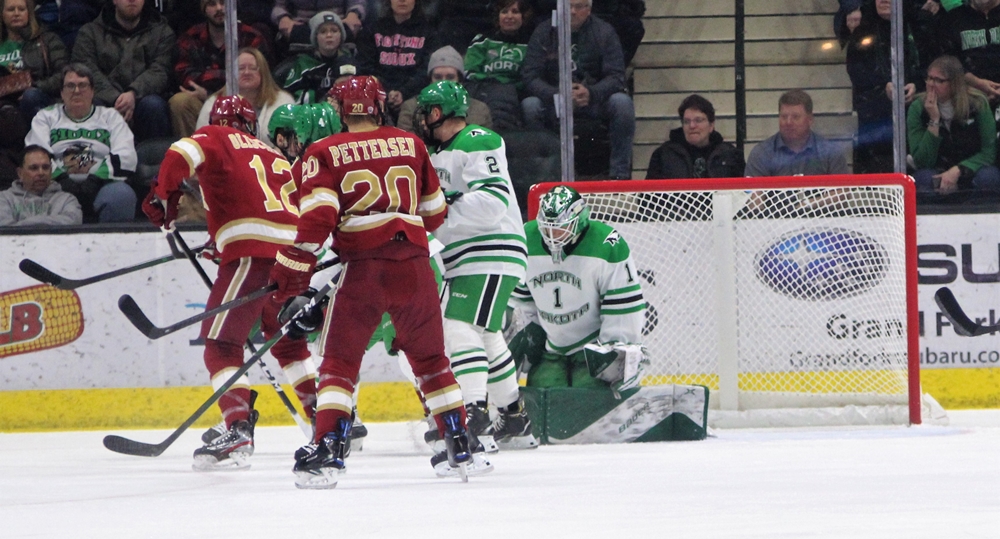 The University of North Dakota and Denver hockey teams don’t like each other. Through the years, the series has resembled the Hatfields and McCoys feud. What’s even more ironic is the two teams played on Valentine’s Day. On Friday night, when it was all said and done, the Fighting Hawks sent the Pioneers back to their hotel smarting from another loss. This time, the final score was 4-1.  UND scored one goal in the first period, two in the second period and one in the third period.

The story of the night, the play of junior goalie Peter Thome.  The Minneapolis, Minnesota native didn’t play at all during the first half of the season. Then on January 10, 2020, against the Omaha Mavericks, sophomore goalie Adam Scheel let in four goals on eight shots. Head coach Brad Berry pulled Scheel and in stepped Thome. Since that time, statistically, Thome has been the best goalie in the NCHC (5-0-1, 1.30 GAA and a .935 save percentage), he’s also recorded a shutout.

Last season,  Thome was on the wrong end of two of those losses during the first round of the NCHC playoffs. When it was all said and done, UND’s season was over and the Pioneers advanced to the Frozen Four.

“What’s in the past is in the past, and you kind of focus on the next game,” Thome said.  “It sounds cliche, but it’s special because it’s a rivalry game. It’s been an old rival at UND for a long time, it’s fun to add to that storyline and come out on top here.”

“He’s been focused and dialed in,” Berry said. “He had some traffic in front of him and he found the puck.  He saw the puck tonight, and he even handled the puck a little bit. That’s what you need at this time of year.  That was a playoff-type game and goaltending is a big deal.”

Friday’s game was the matchup of the two NCHC Rookie of the Year candidates Denver’s Bobby Brink and North Dakota’s Shane Pinto. In the end, Brink ended up leaving the game during the second period with an apparent lower-body injury. Pinto was asked if he got a chance to chirp his World Junior teammate.

“I mean, yeah, me and Bob talk a lot and to see him go down like that hopefully he’s alright he’s my good friend so hopefully, he’s okay,” Pinto said.

Friday, junior forward Jordan Kawaguchi continued his torrid pace. Against the Pioneers, Kawaguchi added two more assists to push his season point total to (15g-28a–43pts), he’s also a plus-20. In the past 12 games, the Hobey Baker Candidate has scored (8g-13A–21pts), that tied for second in the nation.