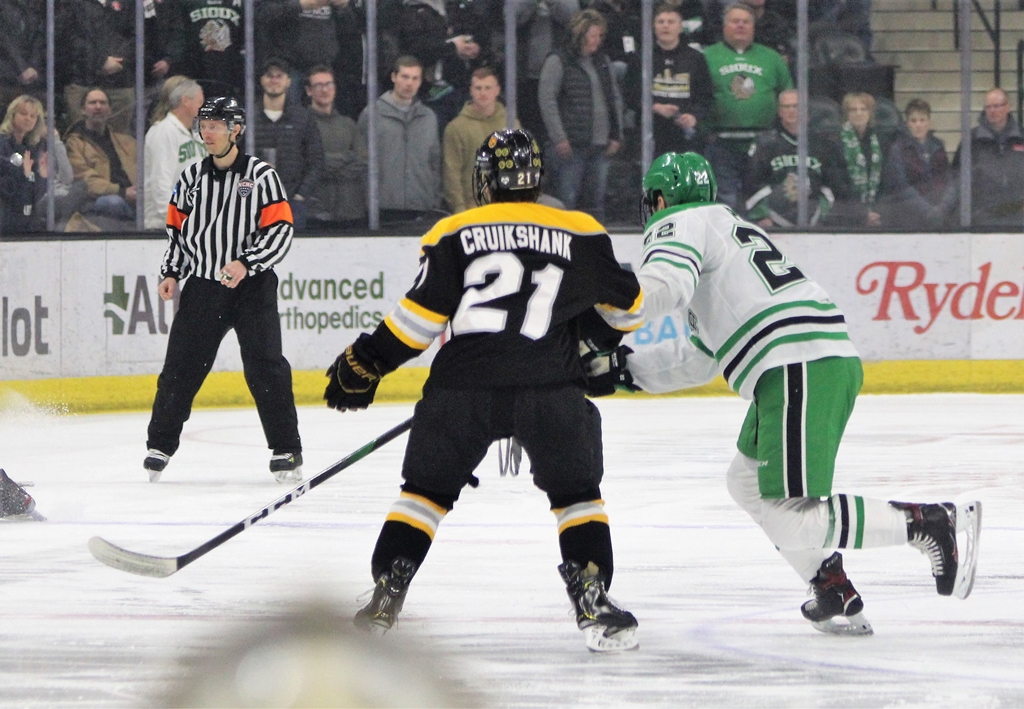 Shane Pinto was the player of the weekend.

On Sunday night, the University of North Dakota hockey team was going for their seventh straight win against the Colorado College Tigers. Mission accomplished. The Hawks shutout the Tigers 5-0. The Hawks were dominating in all three zones on the ice. The Hawks also exposed the Tigers pedestrian d-corps with their speed as they raced around them all weekend long.

When it was all said and done, the Hawks again overwhelmed the Tigers on Sunday putting another 32 shots on the Tigers net. Moreover, the Hawks defense held the Tigers to 34 shots all weekend long.

For the weekend, the Hawks received balanced scoring as seven different players scored for UND against the Tigers. Leading the way for the Hawks, sophomore forward Shane Pinto had three goals and an assist. Pinto leads the NCHC in points with (8g-11a–19pts). Jordan Kawaguchi (5g-13a–18pts) is tied for second with Duluth’s Nick Swaney (6g-12a–18pts).

During that seven-game winning streak,  the Fighting Hawks have outscored the Tigers 25-4. During that same streak, the Hawks have also recorded three shutouts (one by Peter Thome and two by Adam Scheel).

Since losing to the Denver Pioneers 4-1 on January 17, 2021, the Hawks have outscored the opposition 14-2. You can tell there’s been a change in the way the Hawks approach each game. They’ve gotten off to better starts and jumped on the opposition.

“I think the biggest thing is we saw what our bar is the second night in Denver,” head coach Brad Berry said. “We know we can play to our capabilities in a 60-minute game like the second game in Denver.”

True to form, the Hawks players were on message too.  The players are buying in and they’re having success on the ice.

“Honestly, I just think it was a little bit of a wake-up call,” sophomore forward Shane Pinto said. “It was going pretty well in the pod and we came out with two wins against CC in that first weekend, but we weren’t really playing that well. The first game against Denver kind of gave us a wake-up call, and we’ve been much better ever since.”

“I think we just kind of realized that we can take shifts off,” Caulfield said. “The first night in Denver we were a little slow to start, and they hopped on us and just dominated us that game. So, ever since then, we kind of had that mentality that we have to be hard all over the ice and just got to outwork them.”

The Hawks have spent the majority of their season on the road and head out to Omaha this weekend to take on the Mavericks. Playing in front of the fans wasn’t lost on the UND players.

“It’s just good to be back home in front of our fans,” Pinto said. “It was definitely a good weekend for us.”

“We love playing on home ice here,” Caulfield said. “That’s awesome playing in front of fans again, too. It’s not the full crowd that we’re used to, but it’s still better than nothing, and we’ll take anything that we can get.”

After next weekend’s games against Omaha, UND will play five of their next six games at home.

With the win, UND improves to 12-3-1 and is leading the NCHC. UND also has a game in hand over second-place St. Cloud State.

UND is leading the NCHC in goals scored goals against, goal margin, power play, and shots on goal against per game. (Link to stats)