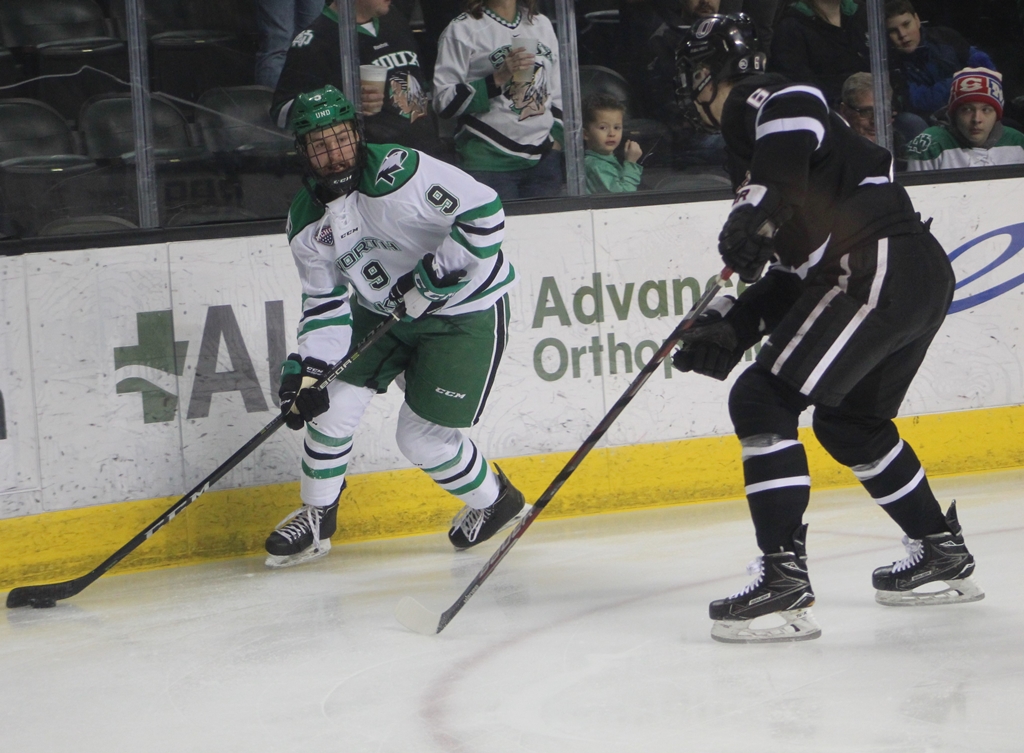 Grand Forks, ND – On Saturday night, the University of North Dakota hockey team was attempting to do something it hadn’t done since December. Sweep an opponent.

The Fighting Hawks were looking to close out the Omaha Mavericks and advance to the Frozen Faceoff for the 16th consecutive year in a row, the longest streak in Division I hockey. With the 4-3 win in overtime, that streak remains in tack.

Here’s the problem, UND hasn’t won back-to-back games since the middle of January. Moreover, the second half of the season has been a house of horrors for the Fighting Hawks, they’ve gone 5-7-5 (.441).

“You knew that was going to happen,” head coach Brad Berry said. “We went to the meetings this morning and told our guys the first game, we had a 3.7 goal differential on Friday nights with the wins and Saturday nights .5 goal differential. So, the games are tight we knew that.”

In the first period, that historic streak looked like it was going to continue without incident, as the Fighting Hawks raced to a 2-0 lead with goals from Matt Kiersted and Dixon Bowen.

Never mind, in a matter of 10 minutes that two-goal lead evaporated.

“We never gave up in the overtime,” Bowen said. “There was never a doubt there. We’re excited to get down to the cities and check another box there.”

You can see where this is going?

At the 05:41 mark of the third period, Jake Randolph gave the Mavericks a brief lead. Just over four and half minutes later, Nick Jones re-tied the game with a beautiful marker.

The Fighting Hawks weren’t interested in extending the overtime very long. The red-hot Jones would score his second goal of the game at 00:53 mark of the overtime to send the Mavericks packing.

“Obviously, we go up 2-0 and then they come back, and they get three straight,” Jones said. “I thought we were resilient and stuck with it. There was no doubt in our room that we weren’t going to be denied.”

“He brings instant experience to your lineup,” Berry said. “He’s a guy that’s been to another program. He went to play junior and came back. With an older player, he’s a seasoned vet and he does all of the little things. he’s playing with a couple of young guys on his line and bringing them along. His leadership skills are impeccable, but he’s doing a lot of good things.

UND advances to the conference championship for the 16th season in a row. With the win, the Fighting Hawks improve to 16-12-10. With the loss, Omaha drops to 17-17-2.  Currently, UND sits at 14th in the Pairwise Rankings.