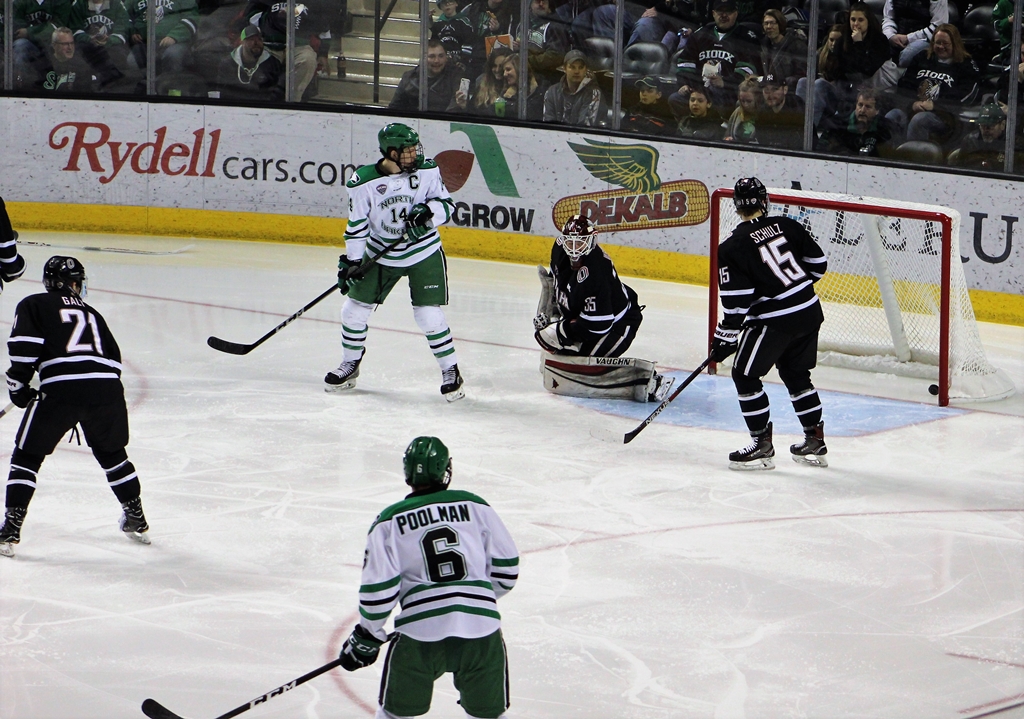 Grand Forks, ND – It’s been a long and trying season.

The University of North Dakota men’s hockey team hadn’t won a game on Friday night since January 12, 2018. Even worse, the Fighting Hawks hadn’t swept a two-game series since December 1-2, 2017. This weekend, the Hawks are looking to are looking to end both of those streaks with a series win against Nebraska-Omaha.

Moving forward, if UND is going to make it to the Frozen Faceoff, they need to win two games.

Friday night, UND came out like a team possessed. At the 13:52 mark of the first period, junior forward Shane Gersich would score the game-winning goal. After one period of play, UND would take a 1-0 lead into the locker room.  Things would get better for the Hawks, at the 1:00 mark of the second period, UND would take a two-goal lead when defenseman Christian Wolanin scored on the power play. In the back of their minds, UND and their fans had to be a little nervous. Right? Not to worry.

Entering Friday’s game against the Mavericks, the Hawks had blown a 2-0 lead in five of the last 11 games. UND didn’t want to make that six in the last 12 games. With the 4-0 win, they didn’t.

On this particular Friday night, UND would take a two-goal lead and not relinquish it.  The Hawks would tack on two more goals in the second period, with goals from junior forwards Nick Jones and Joel Janatuinen.

No one in the UND locker room is celebrating, not yet. This is just one game, one step in the process. If UND wants to extend their season, they need to continue playing like they did on Friday night. There’s no room for error.

“It’s a good start,” Berry said. “That’s the key word, a start. It’s just one game. Our guys did a lot of good things, but again the biggest thing is focusing on tomorrow. Tomorrow is another day and our lives are on the line. Our guys know that it’s going to be a business-like mentality.”

On Saturday night, the Mavericks are going to come out and try to even the series. It’s very hard to end a team’s season. UND doesn’t want to play on Sunday night, Omaha does.

“We want to play the same way and we don’t want to play on Sunday — they do,” junior defenseman Christian Wolanin said. “Obviously, it’s going to be up a notch. They’re going to be more desperate than they were tonight. I think if we play the same way, we should come out with a good result. It’s just a matter of a full team effort and a full 60 minutes again tomorrow. It’s all talk until we can make it happen.”

“We have to hit the reset button on it,” defenseman Colton Poolman said. “They’re a good team over there and they’re going to come back really hard tomorrow. So, we have to be prepared and we have to look at each and say what can we do better? Let’s get the same game plan going and stay disciplined. Keep playing hard and grinding down low.”

The story of the night was the play of senior, All-American goaltender Cam Johnson. After Friday’s game, Johnson has now held the Mavericks scoreless for 130:16. breaking it down further, Johnson has stopped the last 51 shots the Mavericks have put on net. That’s no easy feat, especially with the Mavericks forward group.

Game two of the series is at 7:07 pm CT tomorrow night.