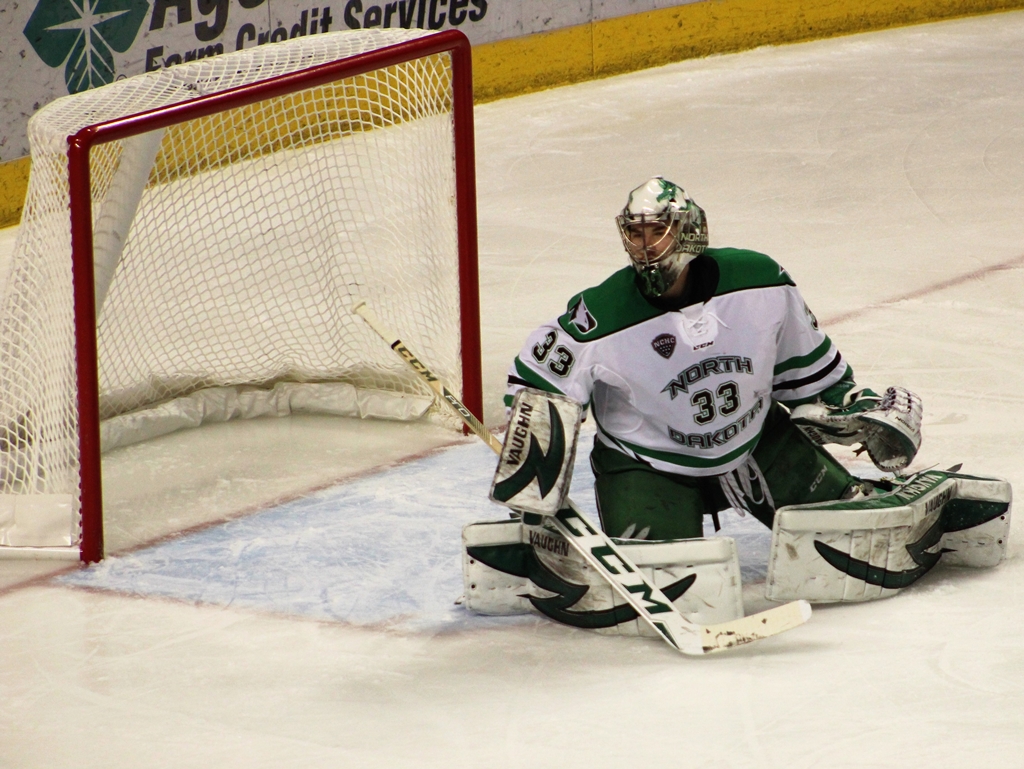 St. Paul, MN – Recently, the University of North Dakota hockey team hasn’t had a lot of success against the University of Minnesota-Duluth. The Fighting Hawks have lost eight games in a row to the Bulldogs, including 0-2-0 this season.

The Fighting Hawks entered Saturday’s Frozen Faceoff consolation game needing to win; they also needed help from other teams in the tourney. First things first, the Hawks also wanted to break their eight-game losing streak against the Bulldogs.

With their backs against the wall, the Hawks came out played a smart game. The forechecked the Bulldogs hard and didn’t give them a lot of time and space. The Hawks also owned the Bulldogs in the faceoff dot, winning 40-of-64 (.625) faceoffs.

The Hawks would strike first, at the 07:22 mark of the first period, UND would take a 1-0 lead with a goal from senior captain Austin Poganski.

The Hawks weren’t done, they would take a two-goal lead, at the 07:09 mark of the second period, with a goal from junior forward Joel Janatuinen. UND would take a 2-0 lead into the locker room during the second intermission. Naturally, UND fans were nervous with a two-goal lead. Today they didn’t have to worry, the Hawks would tack on two more goals and win 4-1.

Senior goalie Cam Johnson was solid in net for the Hawks stopping 27-of-28 shots. The shutout would evaporate at the 16:37 mark of the third period when Bulldogs forward Mikey Anderson shot the puck and it deflected off a Hawks defender fooling Johnson.

No one was celebrating in the UND locker room. Not only did UND need to win, but they needed help (Wins from Clarkson and Providence). That didn’t happen.

“Now we wait,” head coach Brad Berry said. “Now we need help from the rest of the nation, and that’s what we plan on doing.”

Today would end up being the last game for the UND seniors. With Boston University beating Providence 2-0, UND is officially eliminated from the NCAA tourney.

“It’s something that we thought about,” Poganski said. It’s definitely something that you don’t you want to keep at the back of your mind. In our locker room, we had trust and faith that we’d win tonight and have another chance next weekend.

“But yeah, it’s definitely something that you look back at the last four years and I am so thankful and honored to part of the University of North Dakota. It has been the best four years of my life and it’s been awesome.”

“That’s why I was so mad that I got scored on,” Johnson said. “I wanted… you know, if it was my last game, I want to go out of there with a goose egg. I didn’t really try to think about that. I got faith that we’re going to get a couple of bounces here. We’ve hard all year and we’re finally playing the right way.