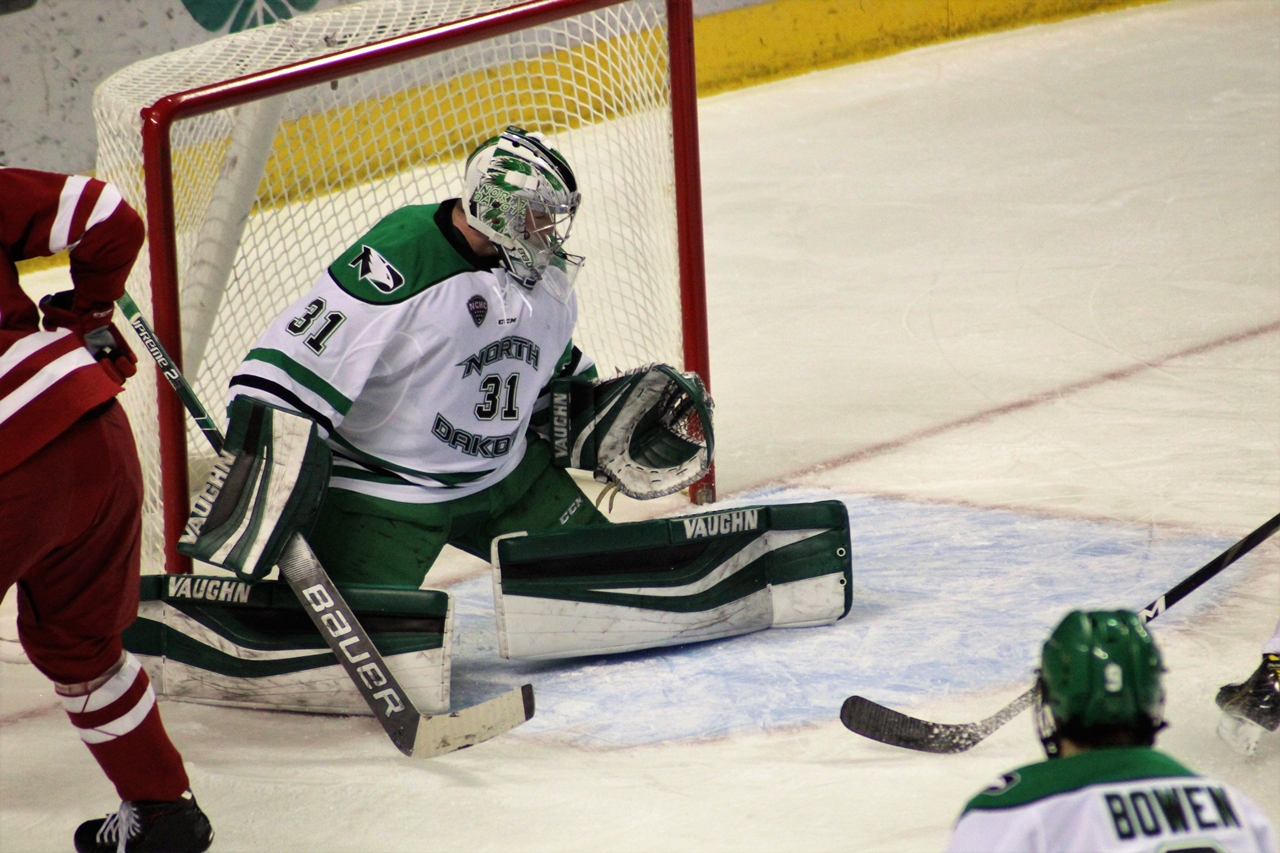 On Friday night, against St. Cloud State, the Hawks came out a bit flat. Early on, the Huskies kept the Hawks at bay. Then at the 08:43 mark of the first-period freshman forward, Shane Pinto scored his first of two goals to give UND a 1-0 lead.

At the 05:37 mark of the second period, Pinto would score again to double his season goal total at four. The Huskies fought back. Less than two minutes later, the Huskies would answer with a goal from junior defenseman Luke Jaycox. The Hawks would regain the momentum. At the 10:51 mark of the second period, junior forward Collin Adams would push the lead to 3-1 with a beautiful marker.

Following their second penalty for too many players on the ice, the Huskies would cash in on the power play with a goal from Nick Poehling. Make it 3-2 UND. That was all the closer the Huskies would get. In the final minute of the game, senior forward Cole Smith would score an open net goal to ice the game for UND.

When I got to the arena on Friday night, one of the first things that caught my eye (on the lineup sheet) was freshman forward Judd Caulfield on the second line with Westin Michaud and Shane Pinto. Against the Huskies, Caufield didn’t disappoint.

“I think Judd, his body of work has gotten stronger as the season went on,” Berry said. “He’s a big guy that has some poise to his game. He plays a heavy game. In the third period, he hung onto a puck, and drug it around a guy and got a great opportunity. So, his game is building and growing. What we want to do, especially with young players, is give them a little bit more if they’ve shown they can play. I thought he did a good job tonight.”

Caufield on playing in his home town at the Ralph, “It was always a dream as a kid sitting up there in the stands, but yeah, it’s just unreal seeing all the fans that we have. It’s great support from the community.”

With the 4-2 win, the Fighting Hawks are 8-0-0 on home ice.  Moreover, dating back to last season, UND has now won 10 games in a row at home. UND is also unbeaten in eight games going 7-0-1.  Like I mentioned earlier, UND has outscored the opposition 38-11 on home ice.

All good things must come to an end. On Friday night, the University of North Dakota entered its final home series of the 2019 calendar year. After this weekend, there will be no home games until January 3-4, 2020.

During the next two weeks, UND will play two away series. One in Minneapolis, MN, and the other in Kalamazoo, MI. After the series against Western Michigan, UND will take a couple of weeks off for the holiday season.

The same two teams play again Saturday evening. In five league games, the Hawks have also taken 14-of-15 points to lead the NCHC.