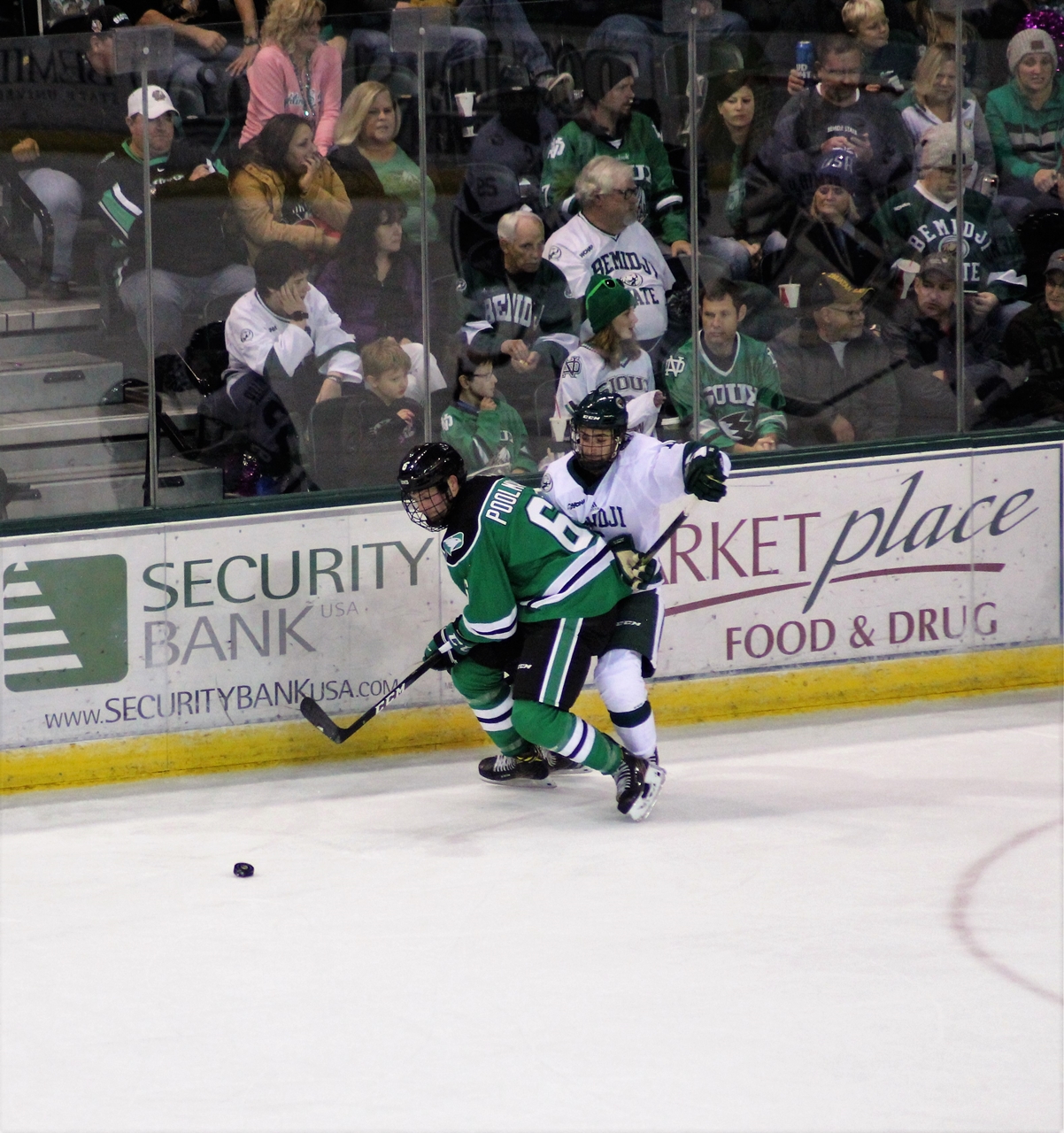 Grand Forks, ND – The past couple of seasons, slow starts have plagued the University of North Dakota hockey team. This Friday was no different. Add to the mix, their opponent the Bemidji State University Beavers. It’s common knowledge, the Beavers are not a lot of fun to play against, they are known for their ferocious forecheck, and they like to clog up the neutral zone.

On Friday night history repeated itself, the University of North Dakota hockey team got off to a slow start. Through the first 12 minutes of the first period, UND had only one shot on net.  Then the Fighting Hawks took flight and started getting some pucks on net. Unfortunately, neither team was able to dent the twine during the first period.

The Beavers would get on the board first.

At the 04:33 mark of the second period, Ethan Frisch was assessed a two-minute minor penalty for boarding. Twenty-five seconds later, BSU defenseman Owen Sillinger scored a power play goal to give the Beavers a 1-0 lead. All good things had to come to an end, that was the first power play goal the Hawks had allowed on the penalty kill this season – 14/15 (93.33).

The second period was a defensive stalemate as neither team was able to score a goal. The Hawks had the better of the play outshooting the Beavers 9-5. It was more of the same, the Hawks had trouble breaking through the Beavers trap.

“Obviously, they’re good hockey team, Jordan Kawaguchi said. “Any time a good hockey team goes into a trap and takes away options, you’re going to have some discombobulation. We just got to find a way to make good passes. They did play the trap and they’re a good team, but we got to connect on passes and just be better.”

“To be honest with you, I was just trying to get a puck towards the net,” Kawaguchi said. “Doc (Jacob Bernard-Docker) used his feet, got around the defenseman. Kind of threw it to the net. I knew Mash (Grant Mismash) was on my left. I was trying to get the puck to the net. To get a rebound out of it, but it snuck its way in. Obviously, I was very happy about that.”

“I think the whole game was bogged down,” Michaud said. “It was hard to play in the neutral zone. It was a hard-fought college hockey game and you got to give Bemidji State a lot of credit. They’re a really good team and, we came in there with that third-period push and fortunately, we were on top.”

In his first five games with North Dakota, Michaud has made quite an impression on his head coach.

“He’s a relentless player,” head coach Brad Berry said. “I think he’s one of those guys… It was tough in the locker room after the first and second trying to find our way here and get us back on the rails. He’s an experienced guy. He’s played four years of college hockey and, he’s a guy that’s been through the good and the bad. Just saying things at the right time and trying to keep things going in the right direction. He comes up with a big play at the end of the game for the game-winner. So it’s great to have a guy like that in your lineup.”

In their last three games against the Beavers, the Fighting Hawks have a 0-1-2 (.333) record. UND broke a three-game winless streak by winning 2-1 in overtime. The same two teams play again on Saturday night at 7 pm CT.