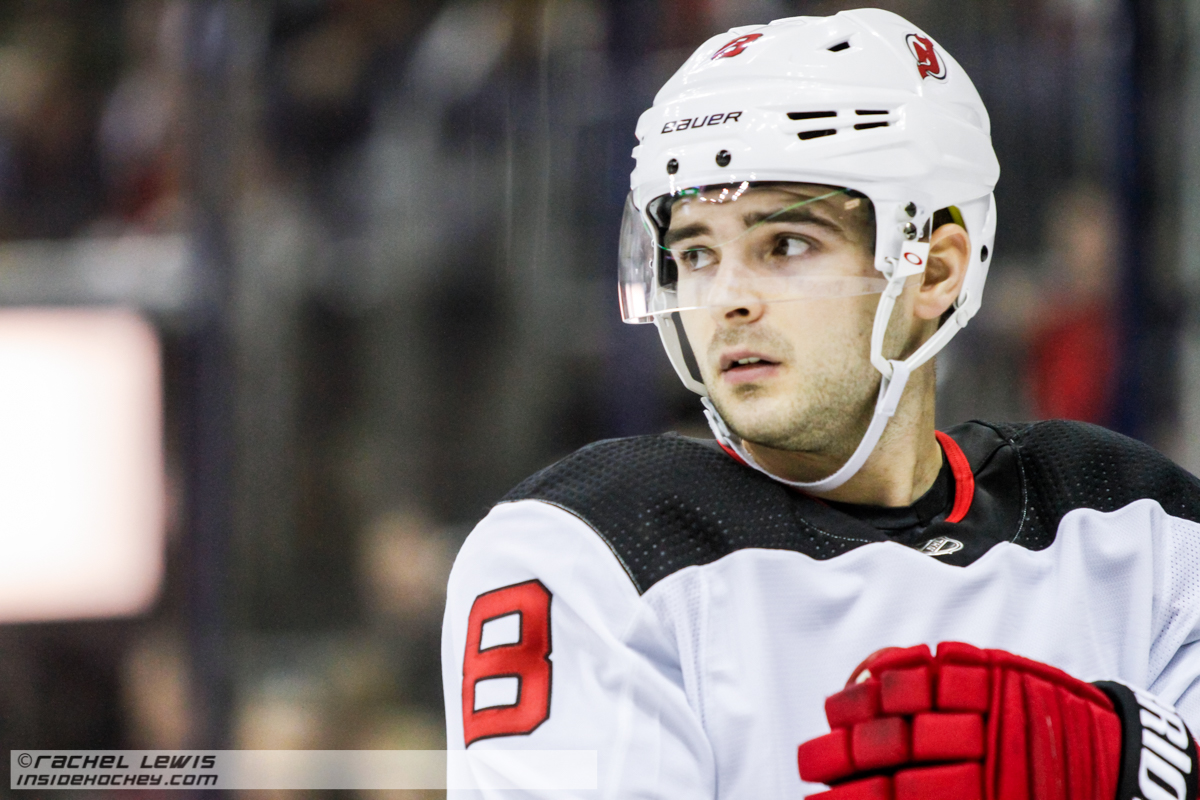 Will Butcher (NJ - 8) gets ready for a faceoff.

Unable to Pay the Tab

Goaltenders are sure to get a few free meals from their teammates on many nights. But most would prefer the win. The Devils scratched and clawed, trying to pay Mackenzie Blackwood’s tab. It wasn’t enough as the Stars won a wild one, 5-4 Wednesday at the American Airlines Center.

Blackwood made his fourth-consecutive start and looked to continue his impressive streak in his infant career, coming off three-straight victories and a pair of shutout’s to close out 2018.

Kyle Palmieri deflection 3:41 into the game gave New Jersey an early lead on what would be one of just two shots on goal during the first period–and nearly 25 minutes of the contest. Jamie Benn’s response at 12:31 saw Blackwood surrender his first goal in over 135 minutes of play. It would be followed up by a pair of early Stars tallies in the second from Miro Heiskanen (3:21) and Tyler Seguin (6:38).

The Devils would again return the game to a one-goal deficit at 11:08 on a Jesper Bratt wrister, but Seguin’s second of the game just over a minute later returned the lead to multi. New Jersey showed late resilency and equaled the score late in the second, but couldn’t survive Heiskanen’s second of the game 6:27 in the third, which would prove to be the game-winner.

It was a missed opportunity. Not only for New Jersey to open a four-game road trip with a gutsy win. Not only to make good on a game in which the team erased two multi-goal deficits and turned a once 27-2 shot disparity into a 40-34 final. It was a missed chance to pay back the rookie netminder, who suffered his second career loss and allowed more than two goals for the first time in his seven-appearance career.

“I don’t think you can play the way we did and expect to have a great opportunity to win a game especially on the road,” said Devils forward, Kyle Palmieri. “I think there’s some good things to take out of the third (period), but most of the game was us not moving our feet and not battling hard enough.”

Of course, this is the National Hockey League. Where goaltenders are paid to bail out teammates and the tabs between defensemen and goalkeepers are usually long-running. And where the response can often carry over into a fresh start. So if anything, Wednesday served as a dose of reality after a week that likely felt a little unreal.

And that’s probably not a bad check for any 22-year-old goaltender to get.

UP NEXT: Devils continue their four-game road trip in Arizona on Friday.

OF NOTE: D, Andy Greene did not return after leaving in the second period with an apparent injury.