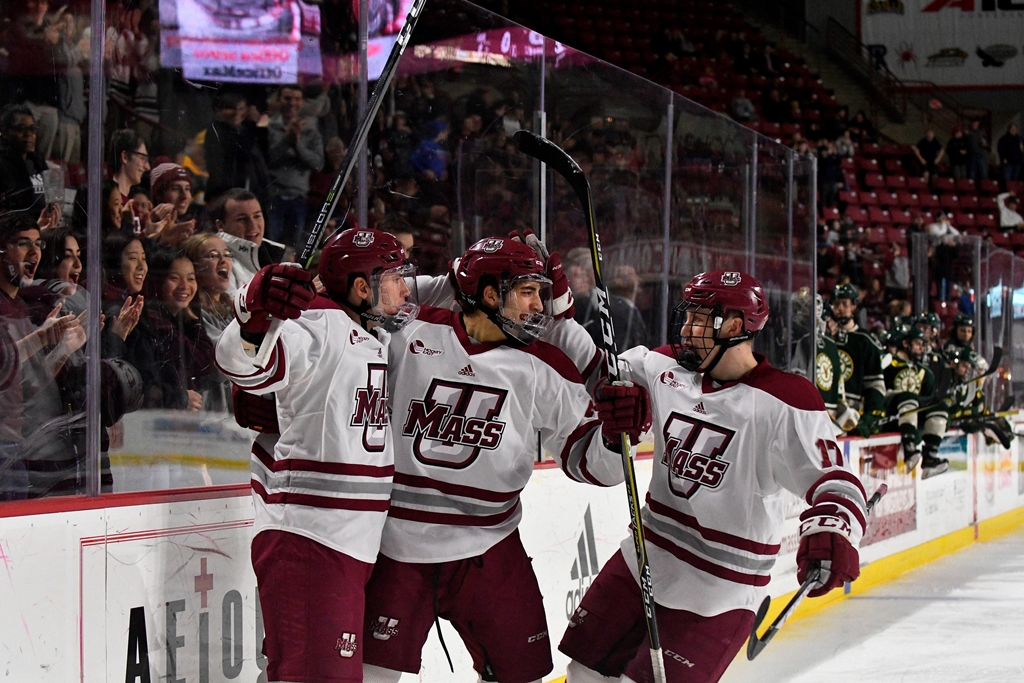 Amherst, MA — The 2019 Massachusetts Minutemen walked into Saturday night with only one loss on home ice. They closed the home portion of the season with an exclamation point victory

UMass exploded off the blocks for a statement period. Cale Makar started the night with his 15th goal of the season on a power play following an Eric MacAdams boarding penalty. Jacob Pritchard followed it up shortly thereafter with his 16th of the season. Brett Boeing flirted with goals the night before but failed to score. The senior from Barrington, Il, finally scored his first goal in two months with a rush and a punch in. Bobby Trivigno ended the frame with his third goal of the weekend by tipping in a Cale Makar shot to cap the four-goal explosion and seemingly decide the game after only 14:37 of play. Mike Robinson was lifted after only five shots faced and nine

UNH tried to push back but only got one shot on three power-play chances with two of them coming in the second. Colin Felix scored his first collegiate goal with a wrister from the point less than five minutes in and Brett Boeing capped the scoring with his second goal of the game and second career multi-goal game of his career.

The Wildcats got one puck through Filip Lindberg, but the would’ve been goal by Jackson Pierson was waived off. The Finnish freshman faced 18 shots, six in each period, and stopped all of them en route to his second shutout of the season and a 6-0 Minuteman victory to sweep New Hampshire.

The Wildcats conclude their season with a 12-15-9 record. UNH played a national high 14 overtime games and went 3-2-9 in those games. They succeeded in a clean transition from long term, legendary head coach Dick Umile to Mike Souza. Five seniors conclude their careers with, as Mike Souza put it, “The jersey being better than when you found it.” Richard Boyd, Frankie Cefalu, Matt Dawson, Alternate Captain Ara Nazarian, who missed the Saturday game with an injury suffered the prior night, and Captain Marcus Vela will continue their hockey playing careers away from Durham.

“It’s one of the interesting things of coaching in college. Seniors are gonna leave you,” commented Mike Souza. “There was great leadership and from that, there was great following.”

Greg Carvel was highly complimentary of his counterpart. “Coach Souza has done a great job this year. They’re gonna come around quickly. You can tell a good coach when you play against him.”

“This weekend was a real statement weekend,” Carvel said. “I was happy the way we played last night and we continued that tonight. The difference is we were able to get to their goalie quickly tonight. And our goaltending, we didn’t give up a ton tonight but we had solid goaltending. We’ve got a lot of milestones. It’s rewarding to win your last game on home ice. We’ll go into Boston with a plan to win the whole thing. We won’t just be happy to be there. But to me, the whole weekend was a statement weekend. For however many minutes we played this weekend, the guys were outstanding.”