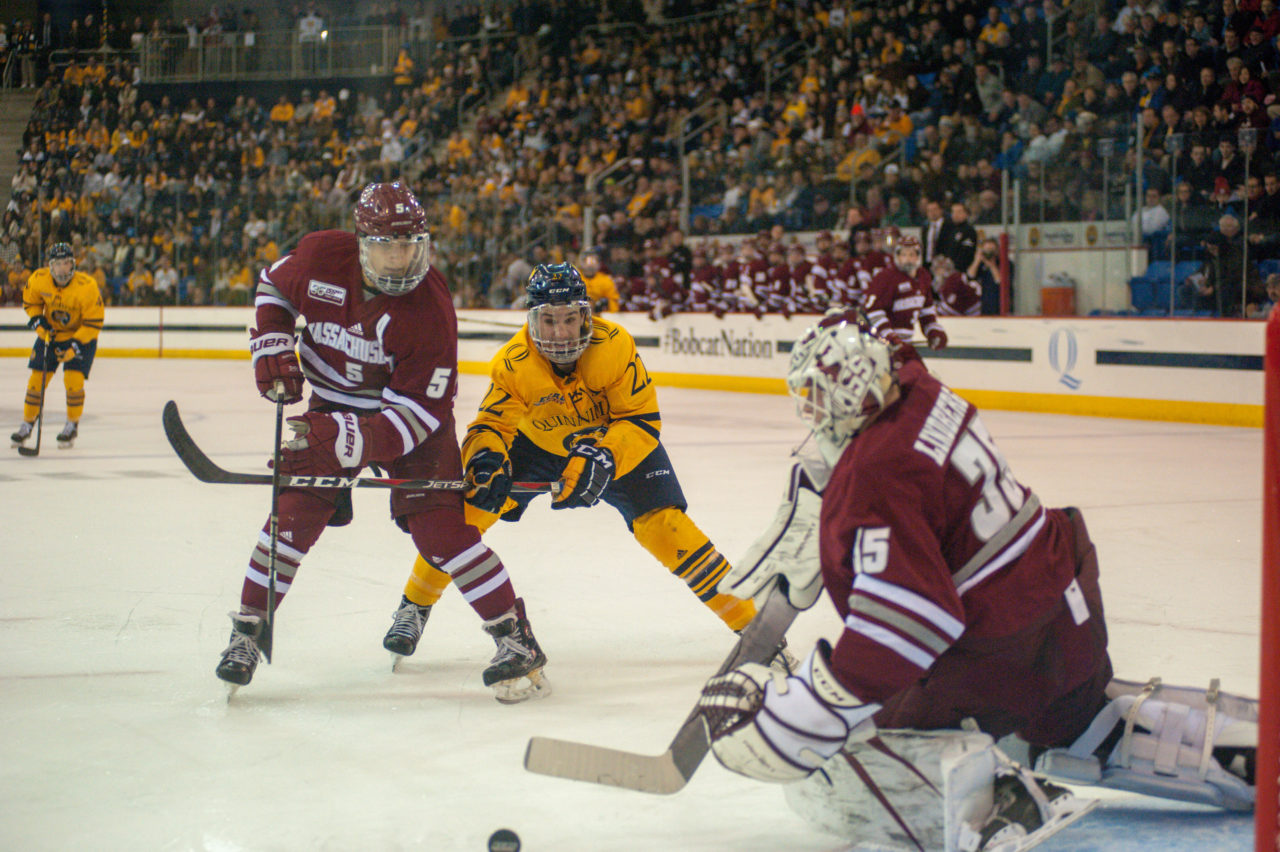 Amherst, MA — College Hockey is nearing its annual winter break. The sport’s best story added one final chapter to their magical year when UMass Amherst hosted the Yale Bulldogs to conclude the first semester of play. Yale offered some fight and argument for a higher rank than 18th, but the Minutemen found every answer and again proved deserving of their #2 ranking.

UMass began the night with a show of skill and speed, demonstrated perfectly with a pair of drop passes from Mitchell Chaffee and Oliver Chau resulting in a Jake Gaudet rip for a goal 6:27 in. The Minutemen controlled the rest of the period and could’ve conceivably been up two or three goals as the year outshot Yale 11-7. Yet, Elis Goaltender Sam Tucker kept his team afloat and sent the game to intermission at only 1-0.

The second period again belonged entirely to the Minutemen. They won the shot battle 12-4 and again got the only goal of the frame. This time, Oliver Chau cleaned up a loose puck on the doorstep for a 5-on-3 Power Play Goal. Tucker again kept his team afloat and down only 2-0 into the intermission.

Yale tilted the pace in their favor for the start of the third. Luke Stevens got the Bulldogs on the board with a cleanup goal following a Chandler Lindstrom shot 32 seconds into the period. Robbie DeMontis benefited from a pinballing puck off a Minuteman head and tied the game less than five minutes later. Despite the poor luck and bad bounce, Minuteman Head Coach Greg Carvel remained optimistic about his team’s chances.

“I feel like we can play well for 40 minutes, and still find another gear,” Carvel said. “They were playing too well to lose that game.”

And @ChaffeeMitchell gets in on the fun with his 11th of the season – a power-play goal that put us back up by ✌️#NewMass | #Flagship ? pic.twitter.com/g5PYh6MdCG

Sure enough, Jake Gaudet restored the UMass lead with his second goal and the first multi-goal game as a Minuteman. Mitchell Chaffee took a Jacob Pritchard goal line pass on the power play and ripped home another goal after the half-mark of the third. Pritchard recorded a third and final assist on Philip Lagunov’s roofer in the final minutes to close the scoring at 6-2.

Yale ends their first half at 7-3-2 overall and 6-2-1 in ECAC play, good for first place. Keith Allain was brief in his summation of the game.

“They were the better team all night,” Allain said. “They deserved to win.”

Yale returns to the ice hosting the Chinese National team on December 28th. Puck drops at 7 pm in at Ingalls Rink New Haven. Their next regulation game is against the Connecticut Huskies on New Year’s Eve at Ingalls. Puck drops at 4 pm.

UMass concludes their most successful semester in program history at 14-2-0 and 7-0-0 in Hockey East Play. Greg Carvel spoke glowingly of his team.

“I thought we played real well tonight,” Carvel said. “We’ve got a great team. I told them how grateful I am that I get to coach them. They’re a group that’s completely committed to doing things the right way. It’s a real pleasure. We combine skill, speed, grit, character, a lot of qualities that have gotten us to this point.”

Matt Murray ended his first half 11-0-0 with a 21 save performance. He regarded his performance this semester as only “acceptable” and credited his team in front of him for the victory.

UMass returns to the ice on January 4th against UMass Lowell. Puck drops at the Mullins Center at 7 pm for the Minutemen to resume their season of dreams.