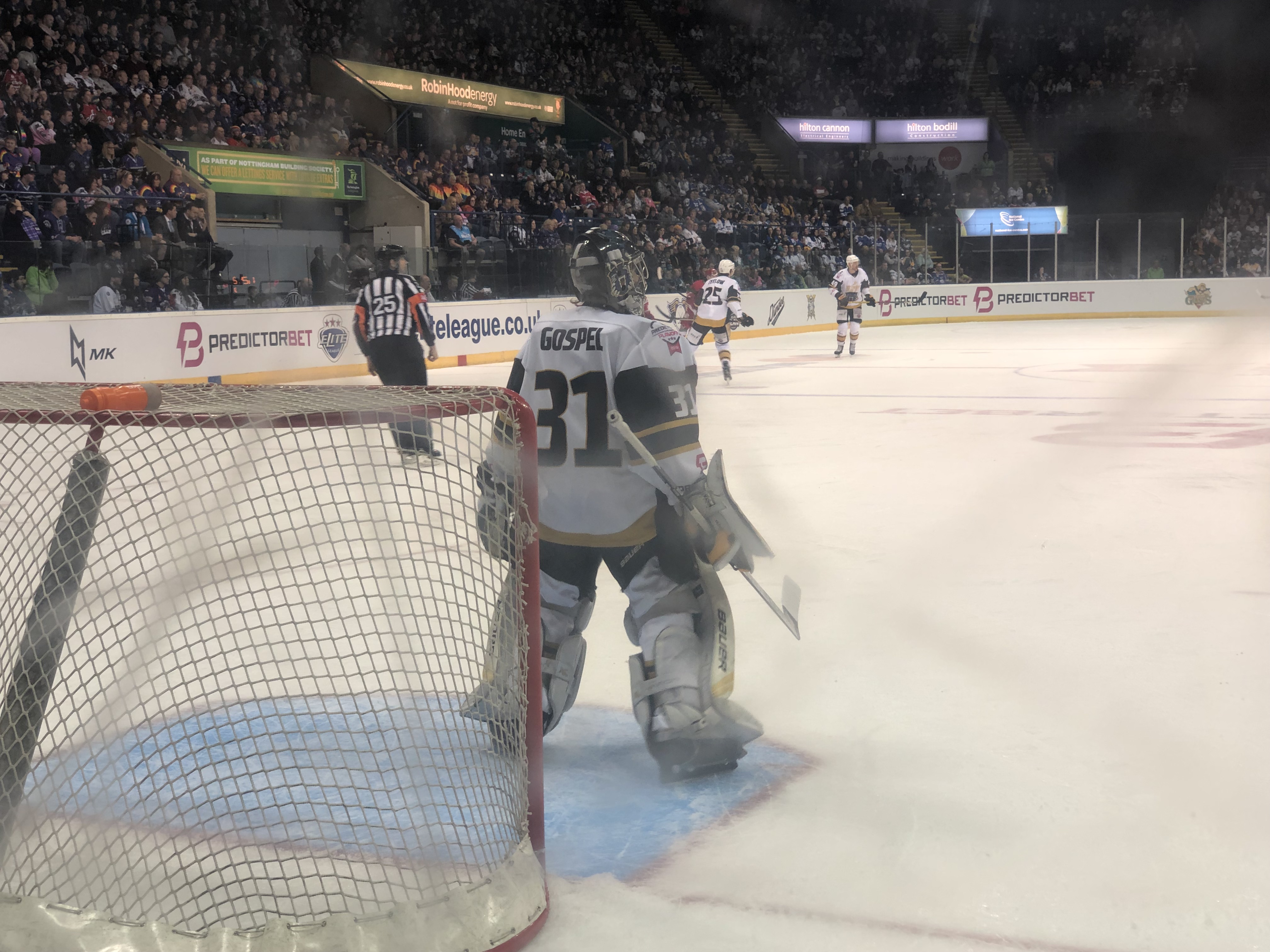 In the prior story, I told you about some happy and excited Nottingham and Guildford fans who talked to me Saturday morning in advance of the two semi-final games in the weekend PredictorBet EIHL Playoff Finals. Each group was charged up about their team’s prospects. The Guildford fans knew they were in deep.

Belfast, the Giants, their first opponent, was the best team in the league this year. The only consolation Guildford had, and that yielded disappointment, was that they had pushed Belfast to OT in the Challenge Cup final, though in a losing effort.

In the end, on Saturday, the Guildford Flames lost in game one. They were ahead 1-0 for much of the game, but Belfast came on late. The goals were scored the same way—passes out from behind the left side of the net with a guy in the slot. Misdirection, a stunned goalie, and Belfast had prevailed. They were expected to.

The Giants survived the game’s only penalty, for high-sticking, with a couple of minutes to go. Guildford blew its man advantage. On one sequence, they passed the puck backwards, through the slot, away from the goalie. Three times. They didn’t register a shot on net on the PP.

Belfast now has one game to go, Sunday. So far, they’ve won everything there is to win this year—the league, the Champions Cup, and now this game.

The second game of the day, Nottingham versus Cardiff, was, on paper, going to be a tighter contest. The Devils of Cardiff were barely beaten for the league championship, by Belfast, on a tie-breaker with regulation wins being the difference. The Panthers were third in the league. Every game these two teams played this year was a one-goal victory for the home side. Six games total. This was the rubber match.

The game proceeded with a torrid early pace and a quite surprising four-goal Cardiff outburst. Two of those were on the PP. No surprise—the team hits at a 29% rate this year. Higher now.

The goalie for Nottingham wasn’t spectacular. Two goals were long fling-ins from the point. He was screened, but that’s the job. One was not his fault—a pass that came way across the slot, leaving him dead to rights as the puck was flung into the empty net to his left.

The only real chances the Panthers had in the first was when they had the PP. Chris Stewart, former NHLer, controlled things in front of the net. He had one chance on a wrap-around from the goal line, and saw it saved. He set up a teammate in the slot late in the going, and the guy let it go under his stick.

And Nottingham made it interesting early in P2. They scored two quick goals. Cardiff responded with one. Then another. And well prior to the midway point in the game, it was 6-2. Open hockey usually means lack of skill except in skating. No team play. No defense. This game wasn’t that. It was well played on both sides. The goaltending might have lacked a little bit, but the structures were there, and the players were skilled.

In retrospect, the Belfast team in the prior game were playing down to their opponents, though Guildford had nothing to apologize for. They just managed to keep things tight, if not locked down in the old NHL trapping kind of way. They limited the chances, and nursed their one-goal advantage. The Cardiff-Nottingham game, by contrast, was dynamic.

In fact, the scoring wasn’t done at 6-2. Before even halfway in the second, Nottingham had put another one in, a puck flung from the left point at full strength.

OK, maybe it was the netminders. As the contest wore through the second half, the goals kept coming. It was 6-3, then 7-3 and 8-3 as the second period ended. Why not change the Nottingham goalie? Because the team had a very young and inexperienced backup, on the game day roster only because he is British and would therefore allow the Panthers an extra import (non-British) skater. But putting him in, according to one league employee I talked to, would be to “hang him out to dry.” So there was no help for the starter, and not even the chance to change momentum. As it was, the Nottingham goalie leaned over and tried to gather himself after each successful failed save attempt.

Period three was more of a score-fest, with the game eventually ending  9-4 for the Cardiff team. And, in fact, the Panthers put the youngster in in period three. It wasn’t the most offensive for Cardiff, though to his credit, the backup goalie of Nottingham, Sam Gospel, played a good frame and let in just one goal. His total experience this year is three games plus this subbing effort. His GAA prior was 4.64. I stood behind him the game ended and they opened the Zamboni doors. This kid is tiny.

A Devils-Giants Final will be the two heavyweights of British hockey this season going head to head. Watch for this—it’s on Sunday at 4pm British time. That’s 8AM for you West-coasters in the US and Canada.

After the game, the coaches commented:

Andrew Lord of the Devils: “Obviously it was a great night for us, and fun night for our organization. Our guys made a lot of plays early. I was extremely happy the first period, and when we got a couple more after they clawed back after the first period.” He later said, “Our big game players stepped up tonight. They really owned it.”

Rick Strachan of the Panthers: “That first goal was a lucky bounce for Cardiff, but they finished it and that gave them some momentum. We scored a couple of quick ones in the second, but we gave two quick ones and they carried it.” He later added, “Both teams don’t want to play. Nobody wants to play the loser cup, but I’ll motivate my guys the best I can.”