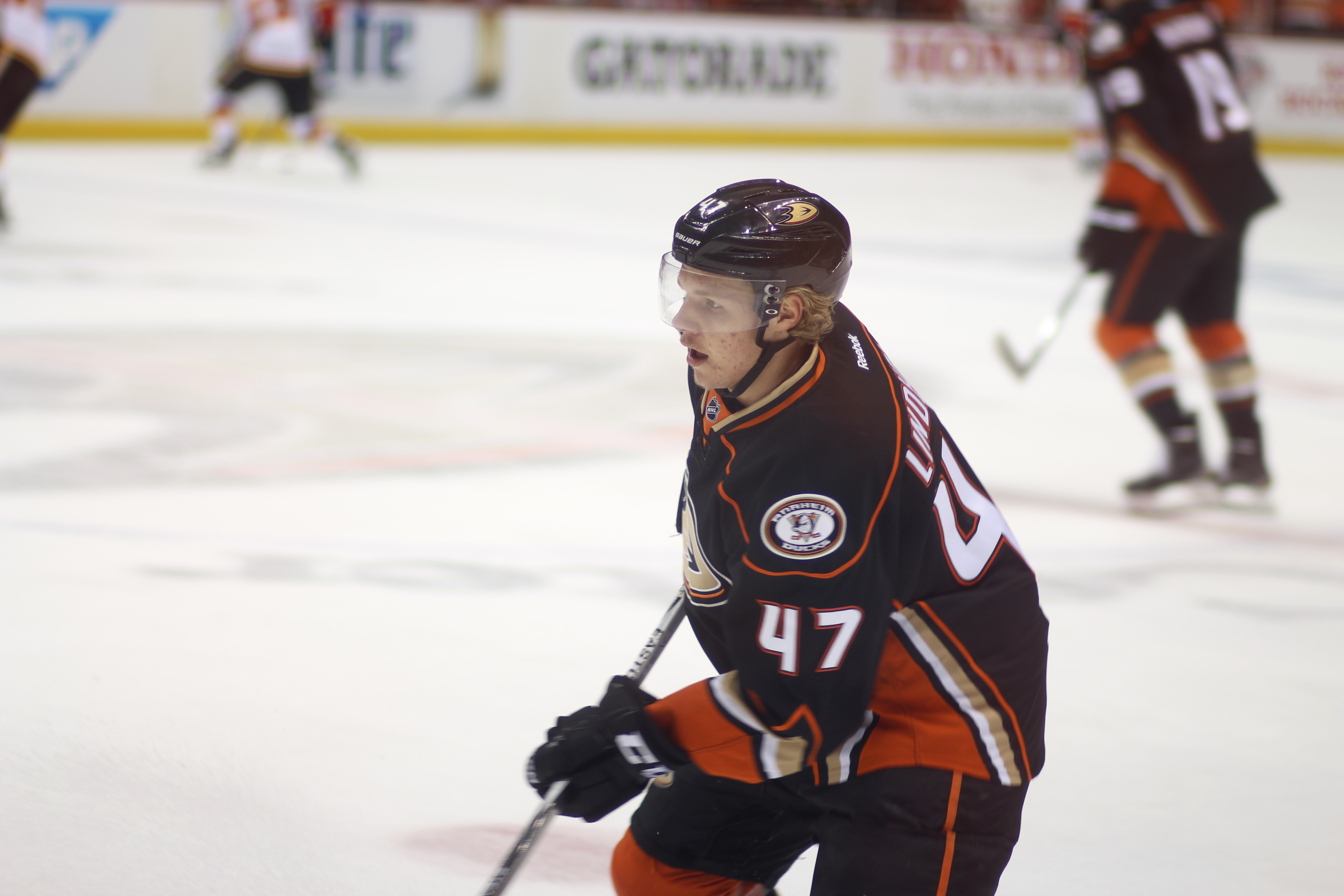 Twenty Strangers Out There

What was supposed to be different on Sunday night for Calgary: their goalie (Ramo instead of Hiller), a returned defenseman (Raphael Diaz—didn’t happen), Hudler and Ferland out due to injury (Ferland sat, Hudler played). And, of course, the results. Nothing changed in that department. If anything, the Ducks were faster from minute one, when they found themselves in the Calgary slot firing a dangerous shot at Ramo. It didn’t go in.

But one other of the 20 first-period shots did, and two or three more should have. That’s right. The Ducks came out flying (not a pun), and they did nothing but spread Ramo from side to side of his net. He made some spectacular saves, so good that even the in-arena commentary between periods said that the game should have been about 4-0. Maybe 3-0 would have been more the truth, but in any event, the Ducks dominated, turning the Calgary defense around time and again and just looking like they were an NHL team who found itself in an AHL opponent’s arena for the evening.

Period two saw little change from a Ducks lineup that has four solid and stable lines and had made no switches from Thursday evening’s game. But it did see some speed and chance-taking from Calgary, who had outshot the Ducks 5-1 by the time seven minutes had gone by.

A couple of the chances were dangerous, including one where Mason Raymond missed from in close in the slot and another where a point shot was deflected by Calgary. Frederik Andersen just got a leg out and saved that one.

But the Flames were in a sense their own undoing. They had a power play and got a couple of shots on it, but in turn they gave one. On that power play, the Ducks, who had closed the shots gap on the period to 6-2 by this point, had three dangerous chances. Perry took a slapshot from the right slot and had the puck hit Ramo’s catching glove and lie on the ice. Nobody got to it. A point shot by Vatanen got through Ramo and trickled to the ice a foot from the goal line. He collapsed onto it. And a shot from Beleskey in the slot hit him high on the arm and flew over the net. It wasn’t that the Calgary goalie wasn’t sure-handed. Just that the shots were at the very edge of his reach or ability each time. That’s a measure of their danger. There was another one just after, the same m.o.—Ramo got it off his chest and squeezed his arms together as he fell to hold it.

The period had turned in the Ducks favor at that point. The shots were 25-14, or 5-5 on the frame, and the Anaheim team started to take it back over. The Getzlaf line had a monster shift, in part aided by the fact that Calgary’s Johnny Hockey (Gaudreau) got stuck on the ice for what was about a two-minute shift. Then the Cogliano line had a great turn. But the Flames got a measure of revenge when Brandon Bollig took the puck around the Ducks’ net and forced a shot at the leg of Anderson on a wrap. It didn’t go in.

The feeling when the frame ended was that it might have been better for the Ducks than it was for the Flames, but marginally so, whereas the first had been a skating blowout on the part of the Ducks. Maybe Ramo was going to steal them a game? About all that would assure was that the over-capacity crowd would be back next Sunday for a game five, unless Calgary could sustain this level of excellence period after period. The shots on the frame were 12-9 for Calgary, and they ended the period with a nearly forty-second power play which would be carried over to the third on, as the cliché goes, fresh ice.

The score remained 1-0, and one longtime Flames observer described the Ramo phenomenon to me between periods saying, “That’s what he does. They put him in when Hiller falters, and he’s always really good in that first game.”

But as cited above, he did have a couple of pucks nearly elude him. He was playing well. In fact, he was the reason for the tight game, and the Flames’ renewed vigor, you could say, was building from the net outwards.

Period three started to tell the tale. Remember, it was PP for the Flames in the first minute and a half or so. They had one slapshot go wide with a crowd in front of the net, and that was it. But the same shooter, Kris Russell, had another chance just after, a step-in wrister that hit Andersen high on the shoulder. Then Dennis Wideman tried a wrap-around. Andersen made a leg save. Wideman had gone off-speed with it, slowing as he wound around the net.

The main difference in Calgary’s play, which was much stronger in both periods two and three, was that they weren’t allowing the Ducks access to their net or the shooting lanes Beleskey, Silfverberg, and Cogliano, for instance, had a chance to run the puck around the zone with about six minutes gone, and all they could get was a plugged-up slot blocking their way.

Lindholm did manage to find a way past the keeper with about nine minutes left, as he launched a wrister with two Calgary men in front and Corey Perry floating by the crease. It eluded the goalie high to the glove side to make the game 2-0.

Bruce Boudreau was not taking anything for granted. “They were coming really hard in the third period until we got that goal,” he said. “I don’t think by any chance or stretch of the imagination was this a dominant effort by us. When you play against a goalie that’s playing like that, you really worry. You have to be perfect, and when we weren’t perfect, Freddie was there when we needed him to be.”

“We stopped working as hard [in the second] than we did in the first and they worked a lot harder,” he said.

The Ducks added a late empty-net goal to make it 3-0.

Corey Perry shared the Ducks’ narrative of the game after: “We knew they were going to come out hard. That first period is the kind of period we wanted to play, and we sat back a little bit in the second, but we knew they were going to come and give us their best. We weathered the storm for a little while in the second period, and we got one to get us going again in the third, and that’s all we needed.”

Andersen was happy about his shutout, but unwilling to talk about his individual performance, instead focusing on how the team had done. “I saw a lot of shots, a lot of the times.” He would go on to say, “I’m pretty happy with the first two games, but it’s all about the next game right now, getting focused on playing in a tough building up there.”

“We just have to keep going, try to get that crowd out of the game up there. The more time we spend in their zone the better for us, and we have to take advantage of that.”

He held the Flames to one goal in two games, but “I’m most excited for the win. That’s pretty much all I care for right now. We’re going to Calgary right now, with a 2-0 lead going into that rink.” OK, Mr. Stay-on-Script. That’s not a lot of fun. But Ducks fans don’t care if you keep stopping everything that gets within six feet of your net.

Perry had earlier said, “Freddie is Freddie. He’s just calm back there. He lets the puck come to him. He makes that first stop and we clear the rebounds, and tonight we did a good job of that.”

Andersen summed up with, “We know it’s going to be tough in their building,” and Coach Boudreau echoed that: “Our scouts have told us that Calgary’s a lot louder than Winnipeg. . . . We watch the games too, and you can see that they were cheering from the minute the puck dropped until the minute the game ended. Good Canadian fans, and that’s what you expect from them.”

Bob Hartley said essentially the same thing, come to think of it. “We’re going back home. Like we knew it would be you know, they’re the top team in our conference. They’re solid top to bottom in that lineup. They have great size, great experience, great skill. But now we’re going home, like ah, we can’t derive confidence from the result, but we can draw confidence from the last thirty minutes, and our fans, we know how crazy it is in the Scotiabank Saddledome. We’ll try to win one. We’ll try to win the first one, and we’ll see where we’re at and uh, I’ve been down 2-0 lots of times, and we have found ways to come back.

“I felt that especially in the last thirty minutes, we regained our composure. We regained our structure. The first twenty minutes, we looked like twenty strangers out there. We just met for the first time, and they were all over us. We had a few bad pinches, a few bad reads, and they’re a team that when you give them outnumbered situations, they’re so good that with a lead, they’ll score some goals.”

Boudreau said he worries about being in Calgary when he will not have the last change, so that’s something to watch for in game three on Tuesday evening.

The Ducks still have not played James Wisniewski in the post-season after getting him ahead of the trading deadline. He’s in the press box, though. So what’s up? Lingering injury? Dog house? Or fear that his risky game will manifest itself? My money’s on the latter, and the guy who’s in there in his place, Clayton Stoner, has so far not faltered.

David Wolf played in his first NHL game, taking the place of Ferland. He played about 10 and a half minutes, and Hartley was pleased with what he saw.

The series now moves to Calgary for two games. If there’s a game five, it’ll be next Sunday in Anaheim. Time is TBA. The Flames have recently gone 0-2 twice in the playoffs, 2007, 2009, and both times they’ve gone home to win two in a row.

Personal note: I had the chance to catch up with Craig Conroy and give him a copy of Facing Wayne Gretzky, which is my newest book and which he is featured in.