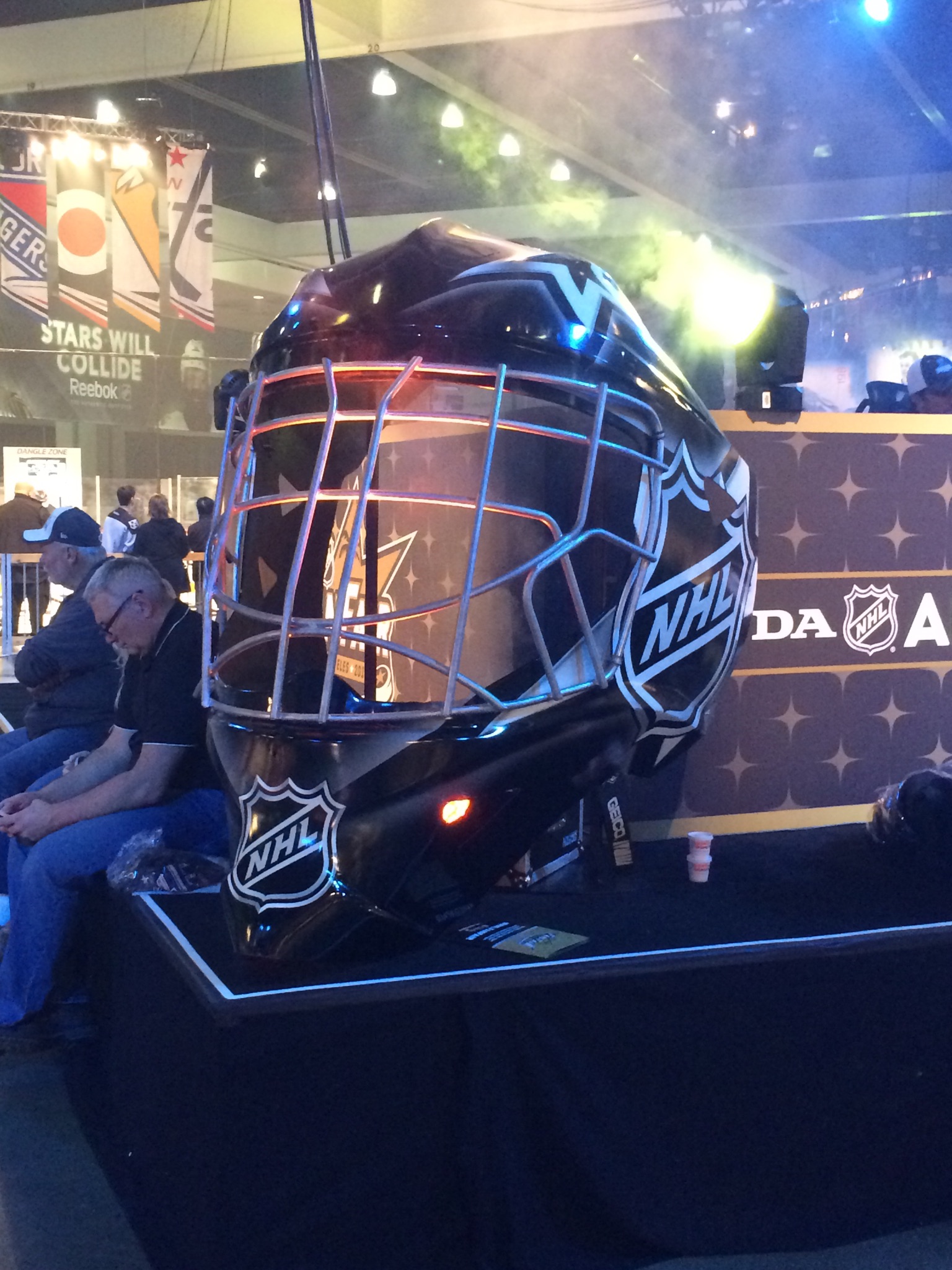 Tighter As It Goes

By now you’ve seen the NHL All-Star game, and you know that the Pacific, which looked to be the most loaded squad, lost a narrow decision to the Metropolitan. So close it was that a skate save decided it. Kesler took the shot, and it was aimed at evening the game with about a minute left. No dice, though the Pacific Conference team had pulled their goalie in an attempt at the tie. It went off the skate of Ryan McDonaugh, hit the post, and bounded into the corner. With it went the hopes of the West Coasters to win the game, which brought with it a million bucks.

So the conspiracy theorists will say that the NHL got what it wanted, because Crosby and Ovechkin won the game. But the league got much more than that. The game is a showcase, always has been. Mostly, in the past, it showed off what it would be like if serious, skilled, and brave players put on kid gloves and handled each other as if they were wrapped in pillows.

The NHL changed all that last year when they shifted the format to three-on-three, which by its very nature is a form of play that doesn’t have a lot of hitting in it. The result of that is what it is during regular-season play, as well—a swift game with lots of nifty passing and the chance for shooters and dekers to do their deal.

Take the stakes out of it—like in the All-Star game, where no points are up for grabs and thus no mistake will ever be fatal the way it can be in a league contest—and you’ve got the recipe for excitement.

Now, the Central team, which got slaughtered 10-3 in game one of the three-game mini-tournament, didn’t exactly stir the pot in game one. In fact, as the old saying goes (and as was being whispered down the row of the press box), Patrick Kane, particularly, “phoned it in.” He looked like he didn’t care. Oh well, others did, particularly his opponents.

The Pacific showed their regard for effort from the first, and funny enough, Ryan Kesler scored a goal just about exactly like the one his kid, Ryker, had scored Saturday. That was number eight of the ten that the Pacific notched in game one, and it went between Dubnyk’s legs and under his pad just as Ryker’s had done to Carey Price.

Other surprises in game one included Bo Horvat. He’s in Vancouver, and thus should be on my left coast radar. He’s not. Or he wasn’t, until today. His goal, the ninth, showed him holding the puck in towards the goalie and shooting it across the grain into the open top left corner of the net past the keeper’s right shoulder.

Perhaps not a surprise, but great to see was Johnny Gaudreau, every bit the wizard with the puck he has the reputation for being. Witness the goal he scored in game one. He cruised in from the right dot, opened his hands, and let one fly over the left shoulder of Devyn Dubnyk.

He potted his second goal and his team’s tenth right after Horvat’s. Once again, he put it over the goalie’s left shoulder, into the top corner, in a mirror goal to his first but from the opposite side of the ice.

Other lessons from game one? PK Subban and Brent Burns each have some moves going in on net. Cam Fowler, too, with some beautiful, long skating strides. And Doughty, though it’s not as easy to control a game of threes than one of fives, for some reason. He does the latter with regularity, of course playing for the Kings.

But look at the Pacific defense. Or should we say, “defense,” because they’re much more Bobby Orr than Mattias Norstrom. That’s a heck of a lot of scoring depth from guys whose primary job is not to score. At least, not in the regular game.

Yet more: Wayne Simmonds was a rookie in LA when IH first talked with him. My impression had nothing to do with his skills, still developing at that time. My thought was this: Those are the skinniest legs I’ve ever seen, athlete or no. Man, have those served him well. He drove in near the start of game two with Price in the net, and he made a lovely chip shot that snaked up and over Price’s shoulder.

He was a favorite in the building from the first, because LA fans remember and still revere him. Later in game three, on the big board were the potential MVP candidates. Fans were told to text for their favorite. Two were Kings, and it seemed pretty clear that Doughty or Carter would win the thing.

Simmonds was the one who won, and he wasn’t one of the five that people were encouraged to vote for. But I had thought somewhere in the middle of the three-game set that he might make a worthy candidate. He ended up scoring the first and third goals of game two, and the winning goal of game three. In between, he was seen all over the ice. His skating is so effortless that it looks like he’s cruising at times, and when he accelerates, it’s not with the jet-pack swiftness of Jeff Carter. But all of a sudden, Simmonds is in full flight, and obviously capable of doing the right things with the puck when he has it.

And because he was seen, Crosby and Ovechkin largely were not. I’m not saying they didn’t score. But neither of them figured in to any of the team’s four goals in the decisive game. In game two, they had each scored a goal and assisted on one. In fact, each assisted on the other’s marker. But that’s not the kind of production you might expect from the game’s two biggest stars.

Maybe that’s because it was a bit of a Sunday skate for them, though neither had the kind of relaxed attitude certain players from Chicago had.

Or maybe it was because other youngsters that most fans don’t yet bring immediately to mind when they dream about the NHL were more prominent. Ever hear of Cam Atkinson? Yeah, you have, because he’s with Columbus—they of the recent streak, etc.—but what about those two goals and two helpers in game two?

It’s not too early to say that, at least for this game, Crosby and Ovechkin began the process of ceding the excitement of NHL hockey over to a younger generation, whose other highlight moments included Taylor Hall racing the goalie Rask and going around him in game two to put the puck into the open net, Tavares (not super-young, but still) being all over the ice, and Seth Jones roofing a puck after receiving a pass, skating backwards, at the blueline and taking it in on net in game three.

The first two of the three games saw one team score ten goals and the other many fewer, three for the Central in game one and six for the Atlantic in game two. But the third game was tighter.

It ended 4-3, but at one point the Pacific was ahead 3-2 and scored a goal that would have made it 4-2. Instead it went to a tie, then 4-3 for Gretzky’s Metropolitans.

Kesler had scored the goal that would have put his team up by two, and then a challenge came from coach Gretzky for offside. He was right, as it turned out. That cost Ryker Kesler about two years of Harvard-level education at today’s prices, as the winning team took home about eighty grand apiece, using rough math to divide the winning million.

Had it been knotted, it would have gone to a three-shooter shootout, by the way. It’s not like you can play three-on-three after already playing three-on-three.

Goalies used to dread All-Star games because they were sure to mean a shellacking. On this day, it was clear that there was a gentleman’s agreement not to take slapshots, as only one or two of those got used, but the netminders, rather than lying there and wishing they could be anywhere else after having been beaten over and over, were more likely to pop up after a goal was scored and make a spectacular save. Witness Carey Price after having let a goal in and then making a great glove save on the next shot. Or Bobrovsky making a great blocker save in between the first and second goal by the team he was playing for to keep the game going in their favor.

Though let’s just add this: Corey Crawford, roundly booed and jeered as he let in goal after goal, probably wished he hadn’t been asked. Maybe that’s the hockey gods paying Chicago back for getting to send four players. He was the weakest of the eight goalies in the group.

And Rask let in three goals in a space of 19 seconds during the second half of game two.

But Braden Holtby saved things for his team—twice—when the Pacific was pressing to tie the final game late. Doughty snapped a wrister that Holtby grabbed from over his head. And Carter came down the slot with a wrist shot that was also saved with the glove.

Maybe it’s because Holtby had just seen Mike Smith make a great save of his own, sprawling with his legs and gloves flying to intercept the puck. This just after the Mets had scored the fourth goal, and the one that would eventually decide the game.

So it wasn’t all roses for the keepers. But there were enough remarkable saves to make even them shine in a game where nobody expects anything but scoring.

Someone had to win, but the closing up of the scores as game one gave way to two and then three shows you that the games got tighter, and the arena did feel like people cared, perhaps in large part because the “right” two teams—one the local favorite, the other the NHL darling—were vying for the win.

The final goal was a beauty, Hall to Simmonds. They were flying, and Simmonds perfectly chipped the puck over a sprawling Smith to seal it, though there were five minutes, or nearly so, left. The crowd hoped until the end that it wouldn’t stand up, but kinda half thought that it might be OK if it did, given that Simmonds was their guy, too, in a way.

That’s what happened, and he got a truck for his trouble along with his share of his team’s cash. Hope he’s more careful with it than Don Maloney was with the car he once won. He drove it too fast and ended up selling it. That’s a story you hear, but I got it from him once, a long time ago, in the Phoenix dressing room when he was with them and they weren’t yet “Arizona.”

For you regulars, there are two LA-area games this week, Colorado at Anaheim and then LA. And then it’s two weeks or so of playing away for the Kings and Ducks.

Read my books, friends. Facing Wayne Gretzky, Growing Up Hockey, etc. There are six of them.