It’s roughly one week til the NHL trade deadline and the battle for playoff positioning is tight. The narrative in the West has been a reoccuring theme–as the last place L.A. Kings are only eight points out of a spot. But, upon further review, there’s a similarly close race going on in the East.

At the time of this piece being written, the Blue Jackets are third in the Metro with 69 points–and have two games in hand on the 68-point Hurricanes. The Penguins, presently on the outside have 67 points and one game in hand on the ‘Canes. The wild card, which looks like the only path to the playoffs for Atlantic division teams not named Tampa, Boston or Toronto sees the Canadiens and Sabres in for an important final quarter of the season. All of this, eight days out from the Feb. 25 3 p.m. deadline is music to the ears of the lower-than-usual number of sellers in the league, particularly those in the East.

Otherwise, it’s open season for the major sellers occupying the NHL’s basement: Ottawa, New Jersey, Detroit, Florida and the New York Rangers. Together, they have 29 pending free agents and at least a quarter of which, are expected to be moved by the deadline to some of afforementioned teams in the Eastern hunt or any one of the near dozen Western conference hopefuls. 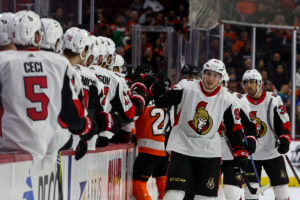 In Ottawa, Matt Duchene, who is more likely than not to be moved, has no reason not to fetch Pierre Dorion something good–he’s on pace for 40 goals and 80 points this season. Mark Stone and Ryan Dzingle might be players the Sens would prefer to re-up–and why wouldn’t they? But, I’d wonder if the seller’s market doesn’t at least make them ponder a deal versus extension to expediate an otherwise long rebild. RFA and Ottawa-born, Cody Ceci is in play too–he’s only 25 so his market can be expanded beyond the rentals and buyers.

The Devils and Red Wings, have some pieces that are enticing: forwards, Marcus Johansson(NJ) and Gustav Nyquist(DET) should be attractive to teams. Nick Jensen(DET) and Ben Lovejoy(NJ) have had their names out there for teams needing depth on D. And G, Jimmy Howard(DET) and Keith Kinkaid(NJ) could be short-term answers for teams with goalie concerns/injuries–Calgary, Carolina?

The Rangers have Mats Zuccarello and Kevin Hayes to go along with Adam McQuaid as they continue on in their rebuild. And the Panthers, who might have a bit of a seller’s instinct with Artemi Panarin and Sergei Bobrovsky out there, seem like a safer bet to sell off UFA, Derick Brassard than any other kind of move. They already moved some contracts earlier this month when they shipped away Nick Bjugstad and RFA, Jared McCann to Pittsburgh.

Four teams are without first round draft picks in 2019 and nine without second rounders–but that feels like it’s going to go up as the currency meets some circumstantial inflation.

Regarding Scott Niedermayer, who will become the ninth player in league history to have his jersey retired by two organizations Sunday in Anaheim, is already regarded as one of the game’s best at his position. His time playing in So. Cal (he remains with the club as a development coach), saw him add a fourth Stanley Cup and flourish offensively–netting 0.532 assists/per game in five seasons. The Ducks are falling on hard times this season, which probably makes it nice to have ’27’ around as a linkage to the pinnacle.

The Blues, who went from a wild card hopeful earlier this month to third in the Central with games in hand on the rest of the division, are finally looking like the roster people like myself envisioned for them in the offseason. They’re 7-3-0 in their last 10 Western Conference contests. If they carry this momentum, it might be the scariest they’ve looked coming into the postseason in awhile including a stretch in which they were regularly a favorite among contenders and eventual early round dropouts.

END_OF_DOCUMENT_TOKEN_TO_BE_REPLACED

The Predators and Sharks, who are set to play in the Czech capital of Prague next month, have been told their Russian players are not welcome in the country. [...]