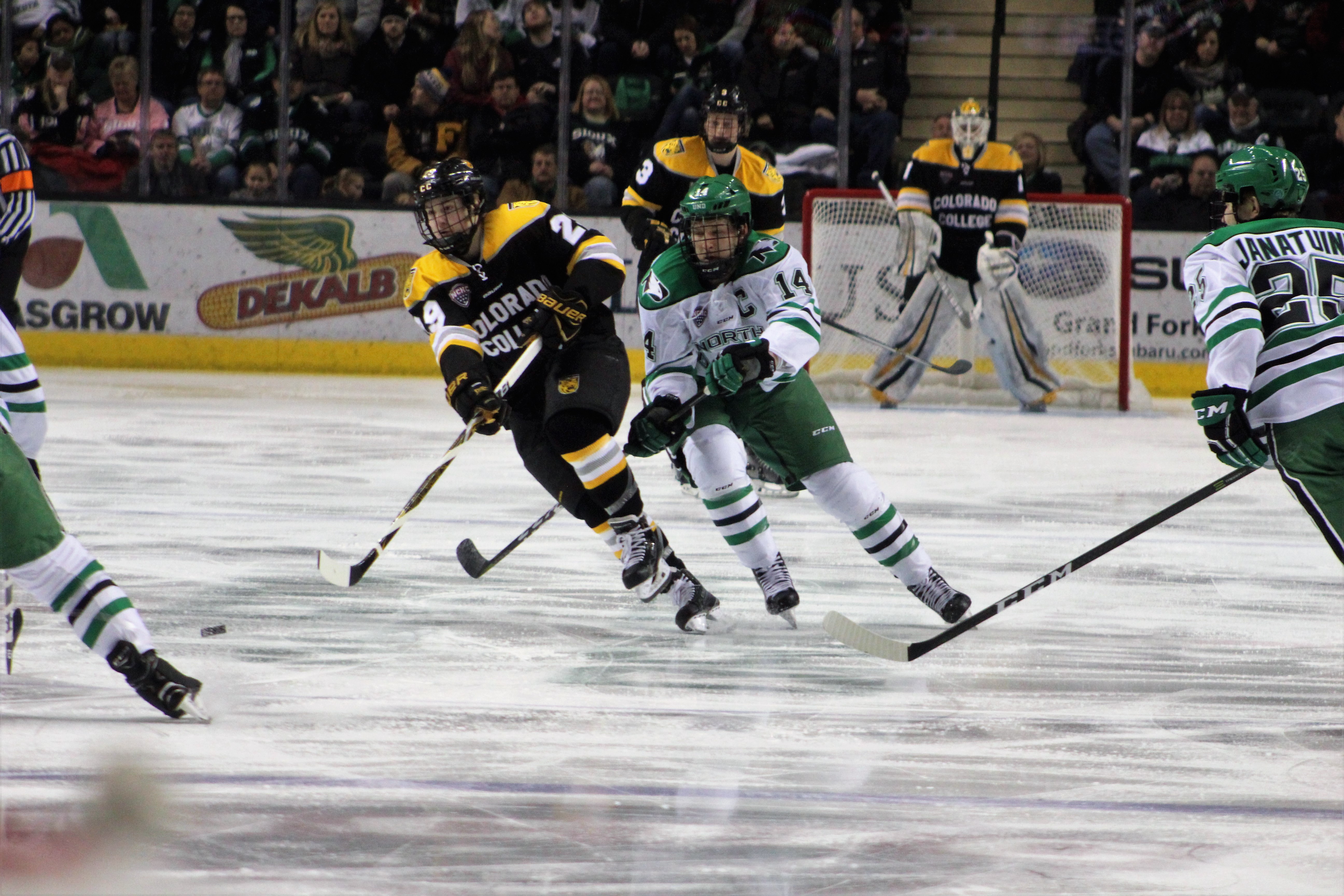 Grand Forks, ND – The month of January wasn’t kind to the University of North Dakota hockey team 2-3-3 (.437) record.  The month of February isn’t starting out very well either. After having a bye week, the weekend before the Fighting Hawks were chomping at the bit to get back on the ice. Up next the Colorado College Tigers.

Cue the spots cliché, if it wasn’t for bad luck, the UND hockey team wouldn’t have any luck at all.

On Friday night, the Fighting Hawks came out and played with pace. They carried the play, however, it was the opportunistic Tigers that got on the board first with a goal from freshman forward Troy Conzo. After one period of play, the Tigers lead 1-0.

Junior defenseman Christian Wolanin would score on the ensuing penalty shot bringing the hometown fans to their feet. . Momentum was on their side, UND looked to take over the game, but that didn’t happen.

The celebration was shortlived. Forty-three seconds later, the Tigers forward Conzo would score a shorthanded goal, his second goal of the game. Make that 2-1 Tigers.

Sophomore defenseman Colton Poolman would tie the game again with a beautiful marker. But it wasn’t meant to be. Forty-three seconds later little used Tigers forward Tigers forward Alex Pernitsky scored his first career goal to give the Tigers a 3-2 lead.

After the game, coach Berry wasn’t happy with the 4-2 loss.

“Every time that we scored our goals they came in right away (and scored),” Berry said. “We let the game get away from us for those very things. After you score a goal or after you give up a goal, you have to have an even harder shift. I don’t think we had that and they took advantage of that.”

Again, UND isn’t scoring a lot of goals and they’re not getting a lot of puck luck. Hence, UND is 0-2-3 in the last six games they’ve played in. In those six games, they haven’t played that bad, they’re just not closing teams out. They’re also averaging a mere 2.16 goals per game. That’s last in the NCHC.

“We have to find a way to get into a grove and get momentum in games and close games out,” head coach Brad Berry said. “Once you get that first one you build on it from there. We haven’t won in six games right now. It’s one of those things where you have to start by keeping it simple. Doing the things that you do on a daily basis and making sure that you close game out and then from there get you try to get the next one.

VIDEO: Christian Wolanin scores on a penalty shot to tie @UNDmhockey and Colorado College up at 1-1 in the 2nd period. #UNDproud pic.twitter.com/YXXEs7CDVV

Tigers on the rise?

For the first time in five seasons, the Colorado College Tigers have won more than eight games.  After Friday’s convincing 4-2, the Tigers are crawling out of the cellar of the NCHC standings. The Tigers are one point behind Minnesota-Duluth and North Dakota in the conference standings. After their win at on Friday night, the Tigers are unbeaten in four games 4-0-1.