The New Hampshire Wildcats and Colorado College Tigers have been pleasant surprises to start the season. UNH was unbeaten going into the weekend and Colorado had the most wins of an NCHC team. Both were predicted to finish low in their respective conferences and have surpassed expectations.

The teams entertained in a 6-3 barnburner on Friday night. UNH won, but head coach Dick Umile wasn’t thrilled with the defensive effort. The Wildcats gave up 45 shots and leaned on a 42 save effort from Danny Tirone to get away with a victory. The Wildcats and Tigers concluded their series on Saturday night.

After a barn burner on Friday, Saturday’s game was a defensive-minded game. The teams combined for eight penalties in the opening period. New Hampshire outshot the Tigers 13-10 and had a 5 on 3 after penalties on Cole McCaskill and Westin Michaud. Patrick Grasso rang the post and UNH didn’t get another good look on the advantage.

Three minutes after the missed power play, four players traded shoves and hits after a whistle. Colorado College was awarded a power play and followed through. Freshman Jack Gates put home a cross-crease pass from Trevor Gooch, scoring his first collegiate goal. UNH continued attacking the Colorado net but did not beat Alex Leclerc for a goal.

New Hampshire amped up their offense more in the second period. They outshot the Tigers 18-6 in the second period. Leclerc continued to stonewall the Wildcats for most of the period, including on another 5 on 3 power play. With 30 seconds left in the period, Max Gildon got to the left circle and beat Leclerc low and left for the equalizer. Gildon is tied for the lead in NCAA goals scored and is leading defensemen in goals with 6. 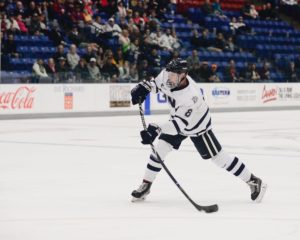 The third period slowed to a crawl. Neither team got double-digit shots and on most shots, the goalies gloved the puck and stopped the clock. Colorado did get a tantalizing chance to end the game in regulation but just missed. Danny Tirone turned over the puck trying to pass it to his defenseman in the final 15 seconds of the period. Colorado got to the loose puck and sent it to Christian Versich. Versich shot it from the slot and clanged it off the left post when the net was largely open. The Tigers missed the chance and the teams went to overtime for the first time this season.

UNH did not get a shot on Leclerc in the overtime. Colorado forced another turnover and made this one count. Max Gildon lost the puck in the neutral zone. Westin Michaud drove the puck to the left circle, drop passed it to Trevor Gooch, and the Junior winger won the game for Colorado.

Alex Leclerc made 39 saves and carried his team to victory. Head coach Mike Haviland raved about his goalie’s performance and his team’s penalty kill. The Tigers killed four power plays, including two 5 on 3 power plays.

“We’re happy with our effort tonight. We played with more structure tonight and beat a good team.”

Colorado is 4-2 after the first three weekends, the most wins for any NCHC team. The Tigers begin league play at home next weekend with a two-game set against national powerhouse North Dakota. Puck drops at World Arena at 7 pm MT on both Friday and Saturday night.

Dick Umile and Danny Tirone were disappointed by the loss but kept perspective on a great start for the Wildcats.

“If you would’ve told us that we’d be 5-1 after the first six games, we’d be thrilled with that start. It’s a disappointing loss tonight, but we put out a better defensive effort tonight than last. We just didn’t get the bounces.”

The 5-1 record is the best UNH start in 24 years and the most wins for any Hockey East team. The Wildcats hit the road with a Friday night game in Burlington against the Vermont Catamounts. Puck drops at 7 pm ET.