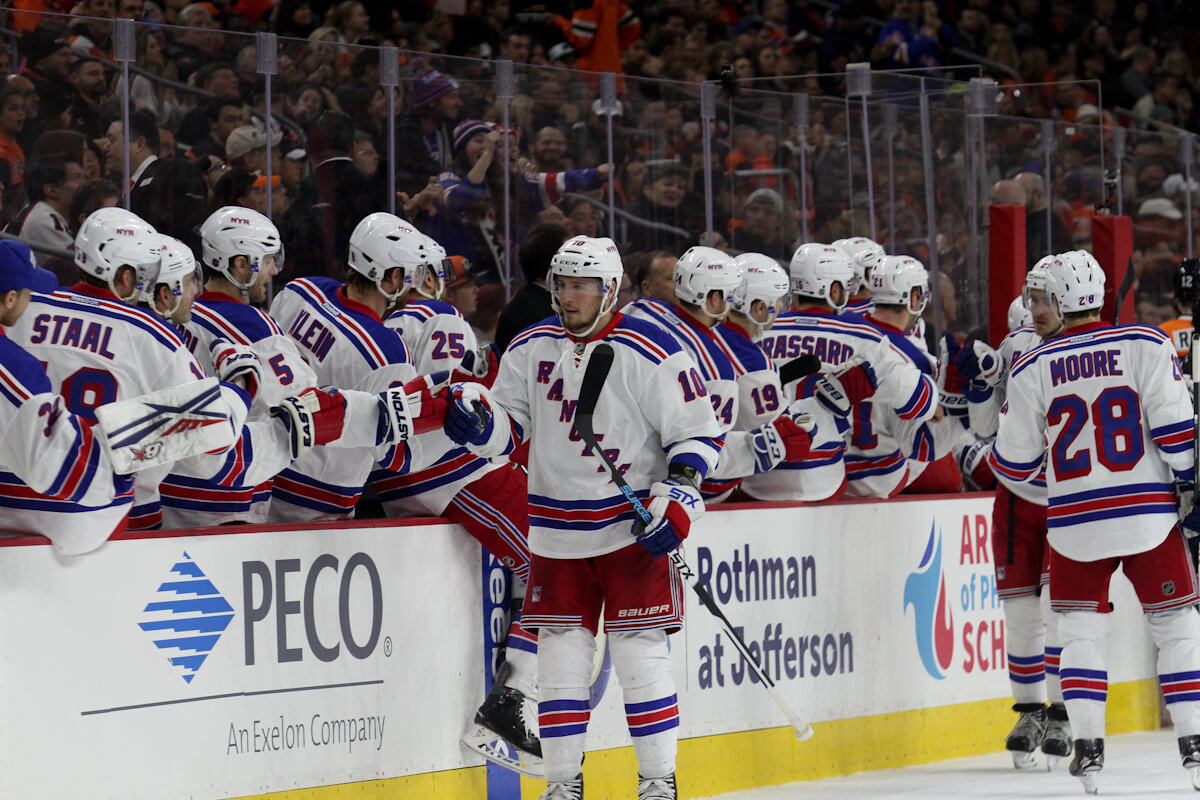 Center J.T. Miller (#10) of the New York Rangers gets high-fives from his teammates during the first period

Fact is, every win is important and every win should be celebrated. But the way things have gone lately, it only means something if they can follow up Tuesday’s performance against the Vancouver Canucks with another one in Carolina on Friday.

They dominated territorially during much of Tuesday’s 3-2 overtime win, outshooting the Canucks 49-20, and out-attempting them 78-37 in all situations.

Despite that, they still trailed 2-1 after two periods thanks to a pair of defensive-zone miscues, and tremendous goalkeeping by Vancouver’s Ryan Miller, who finished with 46 saves. But Mats Zuccarello tied the game with 8:14 left in regulation off a brilliant feed from defenseman Keith Yandle, and J.T. Miller won it during 3-on-3 overtime on a wraparound goal.

The Rangers have earned at least a point in three straight home games when trailing after two periods for the first time since Nov. 10-17, 2008.

“It’s a great sign for this group that we don’t give up,” said goaltender Henrik Lundqvist, who made 18 saves in the win. “We believe in our system. We’re getting closer and closer to our hockey. It’s going to be a battle, there’s so many good teams right now. The good thing is we’re improving, and I think we feel more and more confident in how we need to play to have success.”

“Shots, chances, everything that you want to do in a game we were doing. We were getting some real strong performances,” said Rangers coach Alain Vigneault. “We weren’t giving up much, so what you’ve got to do is stay with it. We did. We were able to tie it up and get it done in overtime.”

There is reason for optimism with these Rangers, who have carried a positive 5-on-5 shot-attempt differential in six of their last eight games. There are still awful defensive mistakes, but there are signs the tide is finally beginning to turn after that woeful December left the team in a mental puddle.

“Hopefully we can jump off this point. We didn’t deviate from our game-plan once. We weren’t thinking negatively out there,” said defenseman Dan Girardi, who continues to slowly improve his game after struggling mightily through much of the season’s first half. “For the most part, I think we’re very happy with our full game. We’re down twice, but we didn’t change a thing. We just kept going. It was just that kind of feeling out there today.”

“We’ve been in this spot now a few times over the last couple weeks,” Lundqvist said. “We’ve been able to come back and I think that’s a great sign about this group; that we’re sticking to the plan. We believe that we can turn games around. Today we deserved the two points, there’s no question about it.”

The Rangers battled through their fair share of bad luck. Their 49 shots on goal are their most in a game since Jan. 4, 2014. They also struck five posts – four of them in the first 40 minutes. But they didn’t deviate. For a change, they didn’t allow the back-breaking goal that’s been so common lately. Instead, they earned their second win of the season when trailing after two periods.

“It’s just one game,” said captain Ryan McDonagh. “We want to continue to try and give ourselves the best opportunity to win games. For us to do that, it’s a prime example tonight of moving our feet, having that shooter’s mentality, and putting a lot of pucks towards the net.”

“What I’m seeing is what I have been telling everyone for the past three weeks to a month. We’re playing better 5-on-5,” Vigneault said. “We’re doing a lot of better things with and without the puck. We’re going to make some mistakes; obviously we made a few when they scored their goals, but we’re doing a lot of better things. We need to get our special teams on track, and we’re going to continue to work on that. I think the way we’re improving as a group, we’re on the right path.”

This group has made many of the same proclamations for the last few weeks. But each time they’ve won since December 22nd, they’ve followed the victory with a loss; an 11-game span of alternating results.

So it’s nice they won. Really, it is.

Miller’s goal was the Rangers’ first 3-on-3 goal since Dec. 10, 2005. Their two previous overtime goals this season came during 4-on-3 power plays.

The Rangers are 21-7-3 when Dan Girardi, Kevin Klein, and Derek Stepan are all in the lineup. The three have combined to miss 28 games with various injuries.