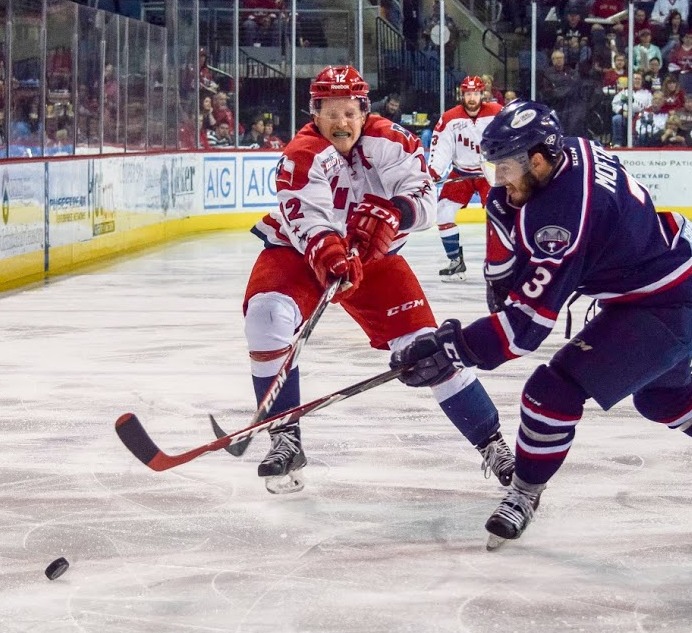 Allen advance to their fourth straight conference finals. This year, they will faceoff against the Fort Wayne Komets, which captured the Midwest Division title with 89 points and earned the conference’s #2 seed. They defeated the Cincinnati Cyclones four games to three in the opening round before sweeping the Utah Grizzles in four straight to win the conference semifinals.

Fourth seed Allen, which defeated Idaho in a seven game first round series, visits Fort Wayne this Friday and Sunday before returning to Allen Event Center next Thursday (May 19), Saturday (May 21) and Sunday (May 22). Games Six and Seven, if necessary, will be played at Fort Wayne on May 24 and 26.

The Americans previously captured the CHL Presidents Cup in 2012-13 and 2013-14 before adding the ECHL’s Kelly Cup during their first season in the league in 2014-15.

Allen defeated a Missouri team that had won the ECHL regular season championship by 10 points, and the Western Conference by 20 points over the Americans. The Mavericks, who are coached by former Dallas Stars defenseman and ex-Allen assistant coach Richard Matvichuk, were the only ECHL squad to sweep their opening round series (vs. Quad City).

“This was a huge game for the guys tonight,” said forward and co-captain Gary Steffes. “The Lord really blessed us. We played a great team game with a lot of heart. It was a solid, disciplined and unified team effort.
“Missouri is a team that deserves a lot of respect,” Steffes added. “They are a very solid team and we have ample appreciation for them. We are grateful and blessed to be moving on to the next round.”

Forward Chad Costello, the ECHL regular season scoring champion the last two years, gave Allen a 1-0 lead with his third goal of the playoffs on a power play midway through the opening period. After Missouri’s Ross Johnston tied the score at 1-1 later in the opening period, Americans forward Casey Pierro-Zabotel gave his team the lead for good, 2-1 on another power play early in the second period.

Allen pulled away in the final period as forward Greger Hanson added insurance with his seventh and eighth goals of the playoffs, the latter one hitting an empty net. Forward Dyson Stevenson also added an empty net goal to close the scoring. Goalie Riley Gill made 32 saves to earn the victory.

“We played a great team game tonight,” said defenseman Aaron Gens. “That’s what you need in a game like this on the road. We know the Mavericks are a good team, but our boys proved they wanted it more tonight.”

Missouri rallied from a 1-0 deficit in Game Five to win, 3-1 on Mothers Day, May 8, and moving to within three-games-to-two. Forward Greger Hanson opened the scoring with his sixth goal of the playoffs less than five minutes into the opening period, but Allen was shut out the remaining 55 minutes.

Center Carter Verhaeghe and forward Rocco Carzo (shorthanded) scored in the second period and left wing Johnston added an insurance tally in the third session to back the 29-save goaltending of Josh Robinson and stay alive. Gill made 24 saves for the Americans.

“It was disappointing we didn’t close it out when we had the opportunity,” said Steffes. We ran into a desperate team that outworked us and earned the win. We will fix the problems by Tuesday (for Game Six at Missouri).”

The Americans increased their series lead to three-games-to-one with a 4-2 victory over Missouri at Allen Event Center Friday night, May 6. Forward Spencer Asuchak broke a 2-2 tie with his third goal in two games with less than seven minutes left in regulation.

“We knew we had to turn things around quickly,” said Asuchak. Our team never quit despite giving up a two goal lead in the third period. We knew we’d get their best effort tonight.”

Forward Vincent Arseneau hit an empty net for his second red light of the night and third in two games to ensure the triumph. Arseneau and Steffes tallied in the first and second periods, respectively, to give Allen a 2-0 lead after 40 minutes. Goaltender Gill was spectacular between the pipes, making 35 saves.

Allen scored twice in the game’s first seven minutes minutes en route to grabbing a two-games-to-one lead with a 5-1 victory over visiting Missouri in Game Three on Wednesday, May 4. Defenseman Eric Roy tallied just :31 after the opening puck drop, and forward Arseneau made it 2-0 with 6:40 elapsed in the opening frame.

“We had a good first shift leading to (Roy’s) goal, and that was a great way to get the momentum in our favor,” said Arseneau.

Added Martinson, “That was a good start to the homestand. The biggest thing you want from you team this time of year is to be improving. I think tonight we showed that if we play confident and play smart, don’t shoot ourselves in the foot, we are a good hockey team.

“We were disciplined tonight and didn’t’ take the retaliation penalties,” Martinson added. “We were also physical and finished our checks.”

After Missouri halved the lead with a shorthanded goal off a two-on-one break by Josh Holmstrom, Allen forward Greger Hanson connected off a power play rush with a deft 25-foot wrist shot that beat Mavericks goalie Parker Milner with a hard, low shot to the righthand corner of the net. Asuchak finished the scoring with his first two markers of the postseason, the last one into an empty net. Americans goalie Gill was strong between the pipes with 25 saves.

Four nights prior, Missouri had tied the series at a game apiece with a 5-2 victory over visiting Allen in Game Two on April 30. Gill was pulled late in the second period after yielding four goals. Joel Rumpel allowed the final goal as Missouri built a 5-0 advantage. Pierro-Zabotel and Costello scored for the Americans. Costello extended his postgame point streak to nine games.

Allen won the series opener on April 29, a 2-0 victory powered by the 34-save performance by Gill. The two-time ECHL Kelly Cup winning netminder recorded his sixth career playoff shutout, which is tied for second in league history.

“When Riley is in a zone, you just believe that he’s going to stop every shot that comes his way,” said Americans defenseman Rick Pinkston. “When he’s playing like that.

Hanson gave Allen a 1-0 lead just over a minutes into the first period, and Pierro-Zabotel added an insurance marker when he converted a rebound during an Americans power play in the middle stanza.