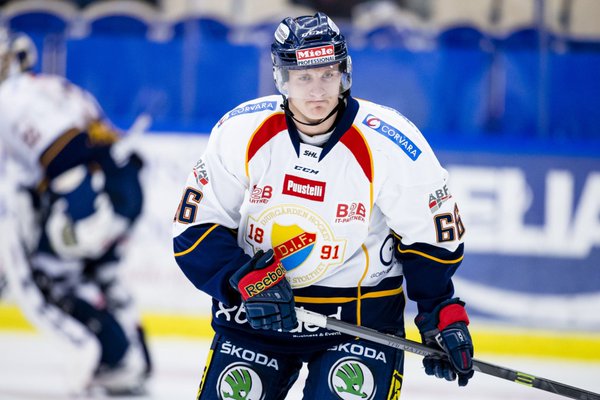 Thoughts on the Sharks’ Signing of Marcus Sörensen

Sörensen tallied 43 points (15 goals, 19 assists), posted 34 penalty minutes, and a plus-12 rating in 47 games for Djurgårdens IF in the Swedish Hockey League (SHL) this season. In eight playoff games, he added six points (one goal, five assists) and registered 14 penalty minutes. Last season, Sörensen was awarded the SHL Rookie of the Year award after putting up 32 points (15 goals, 17 assists) and leading Djurgårdens IF to a playoff appearance.

In 97 career SHL games with Djurgårdens IF, Sörensen has recorded 66 points (32 goals, 34 assists) and 64 penalty minutes. He represented Sweden in the 2015 Euro Hockey Tour, posting three goals and a plus-4 rating in a first-place finish.

According to eliteprospects.com, “An offensively skilled forward, Sörensen is a good skater. He possesses excellent puckhandling ability and has soft hands. He is also a pretty good scorer with some originality. He is of average size, but plays pretty big and gets involved physically.”

By now, Sharks fans should be familiar with the concept of “rolling four lines,” a key element in head coach Peter DeBoer’s brand of pressure hockey.

Let’s rewind a minute to when DeBoer spoke after practice on April 19th.

The Sharks’ signing of Sörensen was the right decision. Sorensen can fill in some of the missing puzzle pieces in San Jose. He tallied 23 points (10 goals, 13 assists) during the 2012-13 season, but ended up with a failed SHL qualification for Djurgården. However, Sörensen extended his contract with Djurgården for two years in February 2013. He was relentless and continued to show the hockey world his growth as a player.

Many people thought the Sharks would not meet postseason expectations this year. Clearly, tons of NHL brackets have already been busted. Among northern California hockey fans, the phrase “same old Sharks” was a constant thought.

But the Sharks’ core players shutout the Predators 5-0 in a decisive Game 7. Joe Pavelski, Joel Ward, Logan Couture, Joe Thornton, and Patrick Marleau scored the five goals that allowed San Jose to advance to the Western Conference Final against a St. Louis Blues team that is also trying to overcome their playoff demons. Goalie Martin Jones made 20 saves to earn his first playoff shutout.

There’s still a large amount of hockey to be played, but the retooled Sharks made a compelling case Thursday night with a perfect 5-0 victory over the Predators.

DeBoer is completing his first season as the Sharks’ coach and has tried to distance himself from the franchise’s past. So far, his strategy has been working.

But a little extra depth will not hurt the Sharks. Sörensen would fit in perfectly with Chris Tierney and Joel Ward on the Sharks’ third line, considering the fact Matt Nieto is out due to an undisclosed injury. He has enough experience and can hopefully contribute to the Sharks’ success.