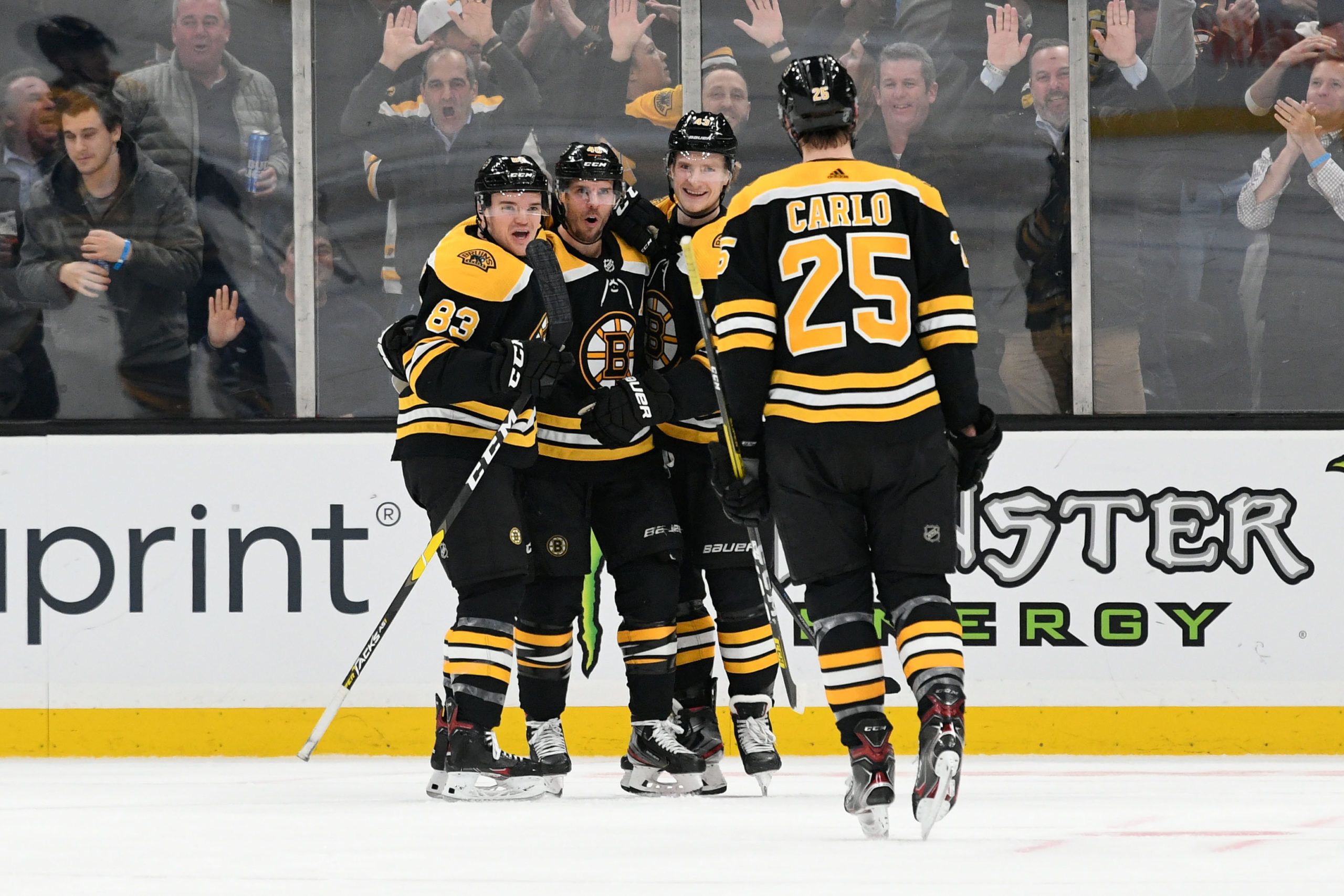 Jan 21 2020; Boston, MA; Boston Bruins center David Krejci (46) celebrates with his teammates after scoring against the Vegas Golden Knights during a NHL game at the TD Garden. (Credit: Brian Fluharty)

Boston, MA –  It did not take long for the Vegas Golden Knights to get on the board. Just 1:24 into the opening period, a backhanded shot by Knights’ Mark Stone slipped just under the glove of Bruins goaltender Jaroslav Halak to open the scoring. Stone was on a 3-on-1, out-skating Bruins defenseman Zdeno Chara to give Vegas the early lead.

The Bruins have been in this situation before; generating a good offensive presence early in the game only to give up an early even-strength goal. Boston had three shots in the opening 1:24 before Vegas had its first shot on net and first goal of the game.

During the opening period, the Bruins would have two opportunities on the player-advantage to tie and possibly take the lead, but they were unsuccessful on both power plays

They would, however, tie the game 11:40 into the opening stanza. Vegas goaltender Marc-Andre Fleury attempted to clear the puck from behind his net to his teammate forward Alex Tuch who was waiting along the left boards. Tuch was unable to control the puck, it ultimately making its way to Bruins defenseman Jeremy Lauzon who was waiting at the blue line. Lauzon shot it over the glove-side of Fleury to tie the game at one apiece. The goal was his second career goal, his other goal also against Vegas on Nov. 11 2018.

Vegas would have the chance to regain their lead 15:55 into the first, as Chara was whistled for tripping. Boston, however, was able to kill their penalty keeping the score tied at one.

Boston would see two more power play opportunities both within the first five minutes of play in the second stanza. Both, however, were unsuccessful, and Boston would fall to 0-4 on the player-advantage so far on the night.

Vegas, however, would capitalize on their power play with just over ten minutes to go in the second period. Boston defenseman Brandon Carlo was whistled for a high stick, and headed off to serve the two minutes. While on the penalty kill, Bruins forward Sean Kuraly attempted to skate in and block a shot taken by Knights defenseman Nic Hague, but Hague one-timed it past Halak to give Vegas the lead. The goal was Hague’s first NHL goal.

With 4:56 remaining in the second stanza of play, Bruins defenseman Charlie McAvoy was hit from behind by Knights forward Chandler Stephenson. While Stephenson was assessed a penalty on the play, Chara immediately responded to the collision, causing a scrum along the boards with Stephenson, but no additional penalties were given out.

Boston would once again find themselves with the extra-attacker, but were unable to take advantage of the power play, ending the second period down a goal.

The Bruins needed a goal, and they needed one quick. Their answer came at 4:26 in the last period of play. Halak came out of his crease to play the puck, the puck making its way to forward Charlie Coyle at center ice who redirected it to forward Jake DeBrusk who was skating up the left side of the ice. DeBrusk then skated into the offensive zone and shot it over the glove-side of Fleury just under the cross-bar to even the game at two goals apiece.

To make sure that no overtime would be necessary, Boston forward David Krejci knocked in the puck at 12:13 of the final period to give the bruins the lead. Carlo took a shot at the blue line, and the puck was redirected in front of the net by Krejci and into the padding of Fleury who was unable to control the rebound. The puck fell to Krejci who stuffed it into the empty net.

Boston was able to hold onto the lead, winning their final game before the All-Star break 3-2.

“The pressure came hard, and you got to be able to handle it,” said Cassidy on how unsuccessful the power play has been as of recently. “You got to win pucks, and you got to be thinking one pass ahead. I thought there were a few looks when we did not get it by [Fleury]. Not enough support, so give [Vegas] credit. They did a good job on their kill, and we did not handle it as well as we could. I thought our guys that were on the power play kept playing.”

“Obviously we like the way how we got the two points tonight,” said DeBrusk on getting the win before the All-Star Break. “We are going to be resetting pretty good here. It’s one of things where you take advantage of, obviously try to reset retool everything up, and get ready for that second half because it’s going to be very tight.”