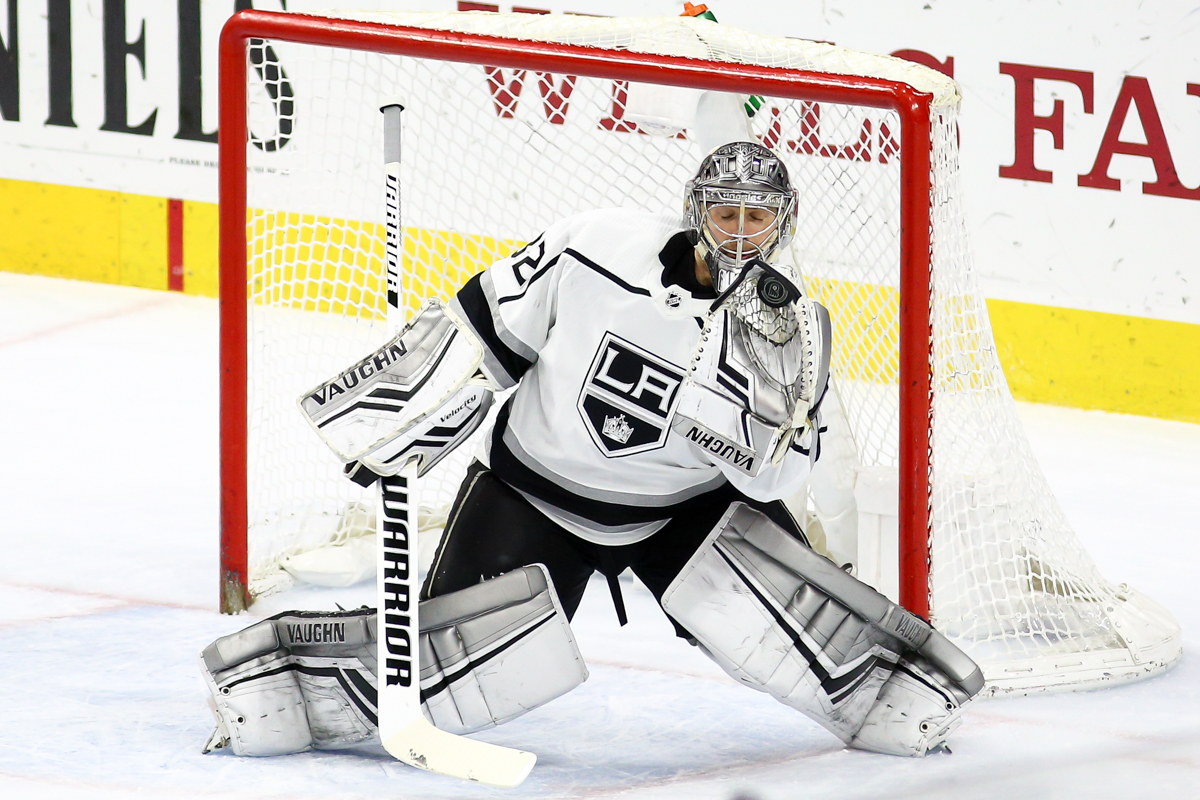 They Battled It Out

Kings-Ducks might not now be what it once was. The Freeway Faceoff hype has worn off. Neither team is making a dent in the league this year. So the crowd on Thursday night (the Ducks almost never play at home on this night, so that too is a surprise) was sparse at first, and only moderately healthy as the crowd finally filtered in for the 7pm start.

They were in for an interesting game featuring a few notable lineup decisions by each coach and some skillful goaltending, especially in the LA net.

The Ducks came out strong, with the second line showing their skill all over the place in the first. This trio was Rakell on the left, Sam Carrick in the middle, and Jakob Silfverberg on the right side. The center for this line is typically Adam Henrique, but he found himself on the third line centering Max Comtois and Ondrej Kase. You’ll notice that Kase, earlier in the year on the first line, is now more solidly established on the third.

Comtois, by the way, is on pace for about 40 points, having notched 4-8-12 in 25 games thus far this year coming into the night. He exited with no points and one minor penalty taken.

To go back a moment, Carrick was playing his second season game after being called up from San Diego on the seventh. He played on Tuesday versus Minnesota on the road, getting in 12:12 and notching an assist. He also launched three shots on goal. On Thursday, he and his linemates were played somewhat sparingly in the first two frames, but used a lot in period three.  Carrick had six minutes in the third, Rakell eight. The latter ended with 20. Silfverberg had the only point of the trio, but it was on the power play, not with the line.

The Ducks’ first line was also a bit unfamiliar, as Nick Ritchie is out for more than a month, possibly longer, on the Radko Gudas hit of a week ago. On the left side of that line was Sam Steel, with Troy Terry on the right. Come to think of it, the only thing the same about that line was that the captain, Getzlaf, was in the pivot spot.

So Eakins is mixing up his lines, as has been his practice. Is this enough to explain the team’s pitiful 83 goals, ahead in the West of only LA, with 82?

The Kings had their familiar first line, a second line where Kyle Clifford was on the left wing, up from line four (though the same as Tuesday versus the Rangers). Would you dare say he had “played himself” up the lineup? He certainly didn’t hurt his case on Tuesday, when he recorded no points but was effective, including on a cross-crease long pass that he put right on the tape of Dustin Brown. I asked him about this after the game, and he had no recollection. He was quick to cite the team’s win and not his own play on Thursday. His night ended at about 16 minutes played with one shot and one missed shot.

Clifford replaced Tyler Toffoli, who found himself on the fourth line, but flopped from right wing to left with Matt Luff. Also on the second was Carter in the center and Trevor Lewis on right wing.

The third line featured Kempe with Lizotte and Wagner, the latter of whom was, as usual, speedy early, breaking in on the right side and zinging a wrister long side but past the net in period one.

The fourth line had Toffoli as mentioned with Amadio at center and Luff on the right.

But what really matters is how they play, not who they’re playing with. The Ducks came out strong, as was said above, but the first period ended 1-0 for the Kings on a late goal (a minute and a half remaining, approximately) by Luff. It was a simple play, standard stuff—shot from the point, rebound that was kinda flubbed by Toffoli and then buried by Luff. Too bad, because the home team had won the period on how they played.

Period two began with the Rakell line once more. Almost off the hop, the hitting picked up. The Ducks took a penalty that led to a goal. Doughty spotted Carter low, way low, like below the goal line low, and got the puck to him from the point. Carter redirected it into the net from the left side. But it wasn’t like a failure of the PK. The Ducks had two men short at the time, a 48 second five-on-three that ended, obviously, with the goal, leaving the Kings with a further 1:54 of power play time. They didn’t take further advantage.

The Ducks took none of this passively. Henrique floated a puck to the net from in close. Did it go wide? Did Quick get a glove on it? One of those. Fowler swept the puck to the net and followed it there. The crowd thought it was in, but it dropped near the goal line, and the Anaheim defenseman ended up on top of it, the start of a pile-up.

“I’m going to be thinking about that one tonight, but you gotta tip your cap. He made an incredible play on that one,” Fowler explained in the room after the game.

After this, Nick Deslauriers took on Kurtis MacDermid. When I asked Derek Grant about this after the game, he said it was to motivate the team, although they weren’t at that time playing poorly, he commented.

MacDermid, as I’ve documented here before, is a monster. And they threw down, Deslauriers dislodging the helmet with an uppercut and then taking a fair amount of damage in return. Is it just my impression, or is fighting up again? Is it just that seeing these two not-great teams exposes me to it more? I gotta run the numbers on this.

After the game, Kyle Clifford talked to me about MacDermid, who is now carrying some of the load that Clifford used to carry. “Yeah, it shifts [my load]. Dermie has been real big, and he’s not afraid to step up in that area, so it definitely helps.”

So that and an LA goal were the highlights, but the Ducks were strong late in period two. Three examples: Troy Terry came out from behind the net for a try. Kase got a break with two guys catching him, eventually thwarting him. He half got his shot off. Grant got off a point-blank chance on a rising wrist shot.

The third saw the Ducks close it up by one goal, Derek Grant on the power play at 5:12. They then played an aggressive period and outshot the Kings 17-6 to end the game at 37 shots Ducks and 27 Kings.

When asked about the shots after the game and whether his team needs even more, Coach Eakins of the Ducks said, “When [the shot] is available [take it]. There are times when the back door is open for tap-ins, and you want to put it there. But I think we had close to 70 shot attempts tonight, and so that being said, if we were at 70 . .  . and we had 37 [recorded shots on goal], we’d like to get more through, that’s for sure.” He added, “I certainly think we had enough compared to theirs to win the game.” But they didn’t. It stayed 2-1 for LA through an empty-net stint near the end.

Drew Doughty of the Kings was happy with his team’s play, but he said, “We’re still not scoring enough goals. I mean two goals in this league any more [aren’t enough]. I know we did it in the past, but it was a 2-1, 3-2 league back then. Now it looks to be more of a 4-3 league. We need to score more goals. Instead of it being 2-0, we would have liked to get it to be 3-0, and really put the game away. But at least we battled this out and got the win tonight. It’s better than letting a team back in it and having to go to overtime, which we have done in the past.”

The Kings now really go on the road. Which, ironically enough, means go in the air. They play Pittsburgh and a passel of other teams over an eight-game stretch that has them at home just once, against St. Louis on the 23rd.

The Ducks have the Rangers in town Saturday and then go East for four in a row concluding with the Rangers on the 22nd.

Twitter: @growinguphockey. I wish you’d point your friends there too.

My books are available in the usual places. Growing Up Hockey has never been known to disappoint, especially for Christmas!