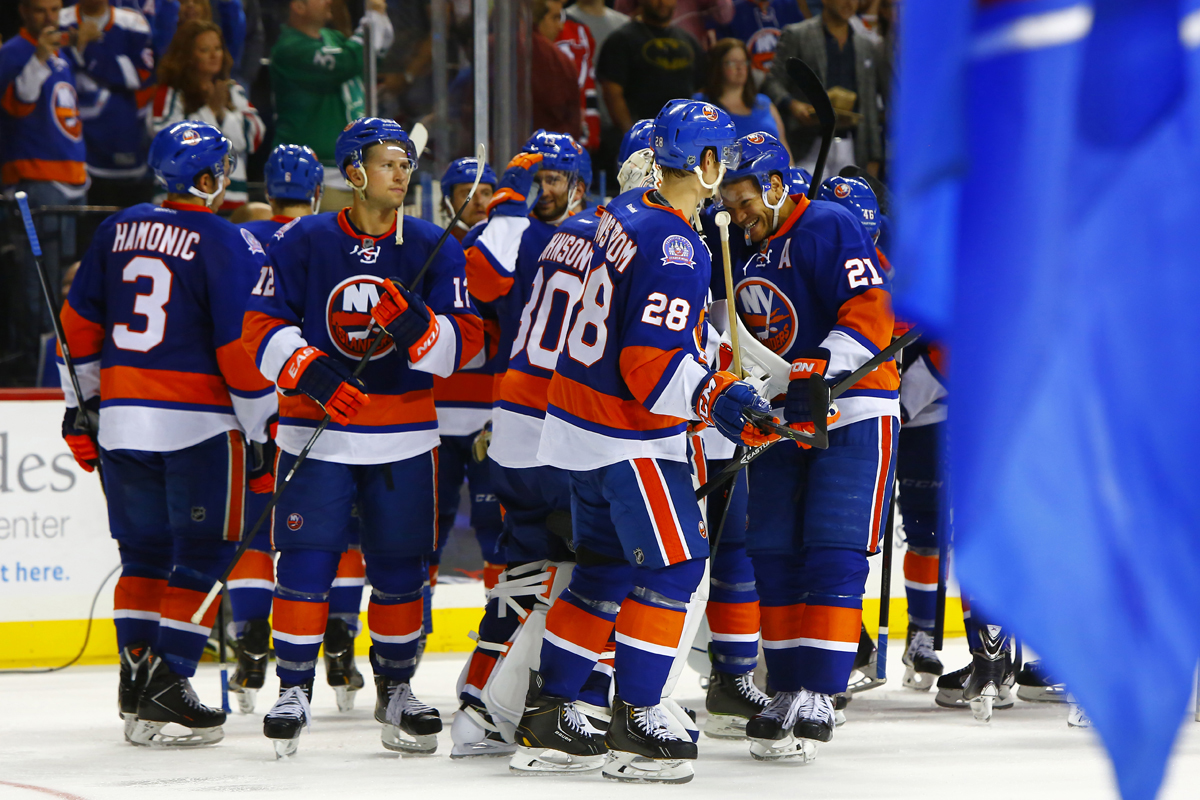 NY Islanders celebrate their shootout win over the NJ Devils at the Barclay's Center.(Brandon Titus/Inside Hockey)

The Top 6 Reasons Why the Isles Lost to the Capitals

The New York Islanders exceeded expectations this season finishing with 101 points and making the playoffs in their final season at the Nassau Coliseum. Still, they came up short in a hard-fought, seven-game series with the Washington Capitals.

This was a series the Islanders had plenty of chances to win this series, but here are the top six reasons why they came up short.

The Isles had their best opportunity to take control of the series early on. The Isles won Game 1 in Washington and held a 3-1 lead late in the second period of Game 2. Washington was forced to play their backup goalie, Philipp Grubauer, when Braden Holtby was felled by an illness.

But the Isles allowed a goal by Alex Ovechkin late in the second period and then two more tallies by the Caps in the third to lose 4-3. Instead of heading back to the Nassau Coliseum up 2-0 in the series, things were all even and the Caps had their confidence back and some momentum as the series headed back to Long Island.

5. The Isles Young Players Did Not Step Up:

Anders Lee, Ryan Strome and Brock Nelson all played a major role in the Islanders success this season, but the dynamic young trio found out the hard way that success during the regular season is one thing but in the Stanley Cup Playoffs, the game is faster, more physical and played on an entirely different level.

It wasn’t that the three youngsters were completely horrible. Nelson scored twice in Game 1 to help the Isles win and Strome had two goals and four points in the series as well. But none of the three were consistent enough and they had trouble playing without the puck, especially in their own zone. Washington was a bigger, more physical team and Nelson, Strome and Lee had no answer for that style of play. As a result, Lee and Nelson were healthy scratches for some of the later games in this series.

This will be a learning experience for the three young forwards, but their lack of consistency and physicality clearly hurt the Isles over the course of the series.

4. A Lack of Secondary Scoring:

The inconsistent play from the young forwards was part of a larger problem: a lack of secondary scoring. The old axiom is that in the playoffs, your best players need to be your best players. When the Isles were playing well, John Tavares was a big factor and his line came up with some important goals. But the top line struggled for long stretches. After the Tavares line, the Isles best unit by far was their fourth line of Casey Cizikas, Cal Clutterbuck and Matt Martin. They hit everything that moved and set the tone for several games in the series.

It was too much to ask Mikhail Grabovski to come back and contribute right away after missing more than 25 games, but they Isles were forced to resort to that due to the lack of production and consistent play from their top three lines.

The Islanders forwards were simply not productive enough as a team offensively and that hurt them over the course of the series.

3. An Overall Lack of Experience:

While players like Johnny Boychuk, Nick Leddy and Lubomir Visnovsky have extensive playoff experience, the Isles roster was filled with players who had appeared in just a handful of games in the Stanley Cup Playoffs.

Key leaders such as John Tavares, Kyle Okposo and Josh Bailey had played no more than half a dozen playoff games in the NHL.

That showed at times throughout the series, but was never more apparent than in Game 7 when the Isles came out tentative and were limited to just 11 shots on goal for the game. Only the strong play of Jaroslav Halak kept this game close but the Isles were clearly outplayed in the deciding contest.

A more experienced team would have made a stronger showing in Game 7 and probably would have put the Caps away in Game 2 as well.

Isles fans should be aware that this is a learning process. The Isles dynasty teams played five years in the postseason before finally winning a Stanley Cup. That included heartbreaking losses to the Maple Leafs in 1978 and the Rangers in 1979. This was only the second time most of these players appeared in the playoffs. Hopefully, the core players learn and get better with experience.

2. The Power Play Failed to Produce:

In the Stanley Cup Playoffs, open ice is harder to come by, defenses are tougher and the game is more physical. As a result, scoring on the power play becomes more important to a team’s success.

Well, the Islanders power play was held without a goal in this series. They finished the series 0-for-14 with the extra attacker over seven games.

The Isles’ power play could have made a difference as late as the final few minutes of Game 7 but they not only failed to score in that clutch situation, they could not generate any quality chances.

If the Isles score just two or three power-play goals, that could have been enough to win the series. The failure to take advantage of the power play chances they had was a big reason the Isles lost to the Capitals.

1. The Loss of Three Defensemen to Injury:

The Islanders finished this series without three of their top defensemen. Defensive depth was an issue for this team all season, but taking on a bigger, more physical opponent without three blueliners was a tall order. It’s to the Islanders credit that they almost pulled it off.

Losing Travis Hamonic before the series even started was a big blow to the Isles. Hamonic played a lot of minutes, is a physical defenseman and loves to play against top forwards like Ovechkin and Nicklas Backstrom. His loss took away toughness, leadership and tenacity. It also meant that the other defensemen had to play extra minutes and assume greater responsibility than they normally did.

The Isles later lost Lubomir Visnovsky during Game 4 on Tom Wilson’s questionable hit. Visnovsky was the team’s most experienced defenseman, a big plus on a squad full of younger players. He also was a good passer and a key component of the second power-play unit. Without Visnovsky, the Isles lost a lot of intangibles and an already thin defense was compromised further.

The Isles later lost Calvin de Haan in Game 5. That left the team scrambling for defensive help. The first option was Griffin Reinhart, but he was a step slow in the one game he played and it was clearly asking too much of him to step into the lineup at this point.

While Matt Donovan and Scott Mayfield did a good job of stepping in during the final two games, Jack Capuano didn’t want them out there in key moments of the game, especially against Washington’s top line. This made his coaching job even tougher.

Brian Strait and Thomas Hickey stepped up and played above and beyond the call of duty, but in the end, the Isles couldn’t overcome the loss of two of their top four defensemen and three overall in a series against a bigger and more experienced opponent.

Despite these limitations, the Islanders came close to pulling off a series win. With the young talent on this roster and the prospects expected to join the team next year, the team should many more chances to go on that long awaited lengthy playoff run. But this year, it was not meant to be.