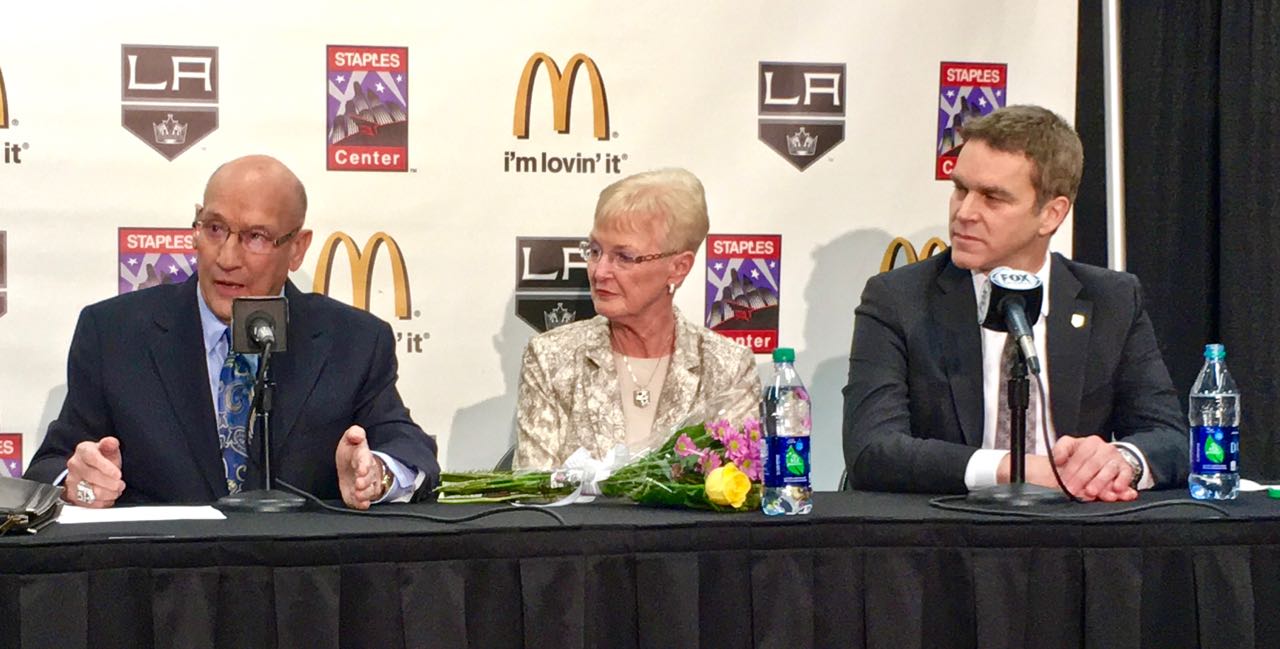 The Greatest of Them All

You want to know the measure of a person? It’s not about what he or she does. It’s about how that person treats other people.

Bob Miller is, in the special way that broadcasters of local sports teams can be, famous. Way more people know who he is than vice versa. I’m sure that everywhere he goes, people say hi. I’m just as sure that he says hello right back. It’s not part of the job. It’s part of who he is. But for those of us who work in (or dabble in) SoCal hockey media, he is more than a familiar face with a Hall of Fame voice. He’s a friend.

After games, unfailingly, Bob and Judy, his long-time spouse (53 years), sit at a table in the dining room on the ice level at Staples Center. Usually, they’re accompanied by others, friends and family. But Bob doesn’t typically sit there for the duration. He’ll get up and walk towards one of the high-mounted TV monitors to see what’s being said post-game. He’ll shake his head at Sutter’s antics, like the rest of us do. He’ll then wander over to the reporters’ table—Dave Joseph is usually there, along with Dennis Bernstein, me, Gann Matsuda—all people who have been around the team for a while, and he’ll chat with us.

Look carefully at that. I didn’t say, “He’ll talk to us,” because that’s not what he does—talk at us. Rather, he opens a dialogue, and he enjoys having us participate in it. It might be on the game that night, or on another NHL topic—trades, a suspension, or something else. The topic doesn’t matter. What matters is that it’s a two-way conversation. Mr. Miller, who makes his living talking, also spends a good deal of his time listening. And he does it in a way that shows that we matter. And man, that feels good.

To say it plainly, what matters to us (if the other guys don’t mind me speaking for them) is that we get to discuss the game with one of the greatest callers of the game ever.

I know what I’m talking about. I grew up listening to Danny Gallivan, Dick Irvin. I saw the 1972 Summit Series, and I’ve watched the games of that series on DVD dozens of times. So I know what it sounds like to hear Foster Hewitt talk through a game. And there’s no question, Bob Miller’s ability to pitch a game, get the voice right, reveal its nuances to the listener (TV watcher) is on the level of those icons.

Heck, I didn’t even hear his live call of the moment that Gretzky became the greatest points-scorer ever, and I can still tell you what he said, because I’ve heard it since. “The Great One has become the Greatest of them all,” is how it went. And even if I’m off by a word, the words I hear in my head are in that voice, that still-slightly-there Wisconsin accent, that Kings fans have come to associate with their team. Bob’s history, in other words, is Kings history, and I’m sure millions of fans would say the same thing.

To cite another example: fans remember that the national TV broadcasters called the Stanley Cup Finals in 2012. People wanted it to be Bob and his longtime sidekick, Jim Fox. No dice. Contracts had been signed, etc., etc. But the team (and good on them) had Bob and Jim call the game live-to-tape. We’ve all seen it since, and that’s what we remember. Heck, I don’t even know anymore who called the game for the network. And it doesn’t matter. Bob’s call of the big moment is what lives for me, and probably for you, too.

I got an email a few years ago saying that such-and-such publisher wanted someone to write a Gretzky book, and would I/could I do it?

“Well, sure I could, but why are you asking?”

“Bob Miller recommended you to us.”

“What? THE Bob Miller? I mean, the one who everyone knows because he IS the voice of the Kings?” OK, I didn’t say that, but I was thinking it while trying to figure out if I could do two things: write something that would repay Mr. Miller’s confidence in me, and actually repay him for his confidence in me.

I knew, though, that Bob didn’t want anything but me to say thanks. In fact, he never would have even asked for that. But I did thank him, with all my heart and enthusiasm. Many times. He always shrugged it off, made it more about what I could do for the game by writing the book than what he had done for me by getting me the deal.

And in one of the greatest moments of my hockey writing career, when I gave him a copy of the book just off the press, he asked me to sign it.

Bob Miller asked me to sign a book for him. It’s just fun to write those words.

And that’s really where my message lies: Bob Miller always treated me like I mattered more than he did. And I don’t. But to him, that’s not the point.

That’s why the hockey Gods have blessed him over the years. And that’s why they’ve given him to Kings fans for over 3300 games.

And for two more. Mr. Miller ends his sparkling career by calling the last two games of the LA regular season this weekend in LA and then Anaheim. But his time with the team is not over. He tells me he’ll still attend games next year and on into the future. It’s just that he’ll consult the calendar and pick them. Such is the freedom of retirement. And I’m sure when he’s at a game, he’ll be downstairs after.

For me and my press buddies, anything else would leave a hole in our hearts too big to fill.