And for my next impression, I bring you Brian Windhorst.

Because in the aftermath of Wednesday’s free agent frenzy stunner–Johnny Gaudreau spurning his tri-state roots to sign with the Columbus Blue Jackets on a seven-year, $68.25 million deal–there’s several things you have to wonder about.

The flat cap market wasn’t great for Gaudreau and his desire to return closer to home after spending his eight seasons in Calgary didn’t do much to help–effectively ruling out half of the league. It’s believed the Devils made a seven-year offer that was somewhere north of $9 million, but under the $9.75 million AAV Gaudreau got from the Blue Jackets. Good luck getting anything from Lou Lamoriello’s Islanders, but they too were interested at a figure that was less than the winning bid. Philadelphia, the preferred spot, was not a player at any point, according to Flyers GM, Chuck Fletcher.

The Flyers were in tough with the salary cap and league sources believe its been a struggle for them to move out money at the cost teams want–likely that 2024 Florida first rounder from the Claude Giroux trade. The Isles, too, were a tough match to see with Noah Dobson in need of a deal this summer and Mat Barzal one summer from now. 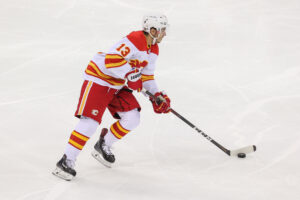 But, the Devils inability to net Gaudreau while holding more than $25 million in estimated cap space feels like a wild dereliction of duty. Tom Fitzgerald said he’d use free agency to make the team ‘better’ and more competitive and yet, even with the first 100-point scorer to reach the open market in the last decade-plus and having a geographic connection to the franchise, New Jersey couldn’t secure his services. They, and perhaps HBSE, couldn’t persuade the winger to take his talents to the Garden State–to Jack Hughes’ wing and to the power play that will likely be ran by Andrew Brunette next season. The Devils, who have historically lost their top players to free agency, had a chance to play role-reversal and yet, they could not manage to win on the open market. They didn’t lose to the Rangers or Flyers–they lost out to the Columbus Blue Jackets, who’ve lost just as many high profile names in the last decade as the Devils.

But of course, that view could be flawed, or at least worthy of some introspective thought.

The Devils, could not secure the services to a scoring winger on a team that is embracing of high-offensive hockey. They’re not Philadelphia, but they are close to his immediate family as far as NHL geography can dictate. He’d also go from Calgary’s heavy-travel division to the Metropolitan division’s relatively soft travel–and New Jersey boasts one of the best situations for season-long travel leaguewide.

So, you just have to wonder what exactly kept this seemingly perfect match from happening.

One thought could be that while the Devils had loads of–and at least $9 million per-year for seven years interest, they were mindful of a top-six that could be electric, but also void of some size. Hughes, Nico Hischier, Jesper Bratt–all locks for the top-six measure under 6-foot-2 and with Gaudreau, they’d have four sub-six feet forwards. For reference, the Cup champs in Denver measured at least 6-foot-1 with three of their top-six regulars and the others included Nathan MacKinnon and Nazem Kadri–who don’t exactly play small. And while I’ll be the first to say I find the size conversation, given the skillfulness and skating of the players called into question, the concern six years from now can be justified, even as the game has continued to shift closer to how the Devils are presently constructed.

And while you must question the decision to hold the AAV at under the $9.75 million figure Jarmo Kekalainen was willing to give in this apparent two-horse race, you can also look at the structure of the deal and wonder a couple of things. With $9.75 million per season in salary and zero payment in signing or other player bonuses, was the logic that this contract, if it was to go awry would be so untenable that Gaudreau, who reportedly has a modified no-trade for the final three seasons of the deal when he’ll be 33-35, would be practically immovable and thus be able to best guarantee his stay in the Eastern time zone?

While no sources have indicated the Devils tried to go heavy with signing bonuses in Gaudreau’s deal, there is precedent to suggest the Devils likely tried to structure a deal that was heavily front-loaded in salary and included signing bonuses in the final three seasons. But while the Hamilton camp one year ago may have been opened to that type of deal, Lewis Gross, Gaudreau’s agent and President of Sports Professional Management, had likely advised his clients of the potential escrow outlook, effectively making the $39 million in salary from 2025-26 through his final season in 2028-29 less likely to be impacted by massive escrow hikes in the wake of pandemic-related losses.

And yes, I know what you’re thinking–bonuses would NOT be impacted by escrow–but, it would likely have a drastic impact on how much actual dollars would be handed out after the third season. Again, this is as much as anything here is hard to exactly predict, wildly speculative. But, there’s precedent to think Fitzgerald and HBSE could have structured a deal this way. It would be quite something though to see a victim of the flat cap despite more than $20 million in projected cap space.

And finally, it could be, that the Devils, void of any kind of organizational success since 2012–and one playoff appearance in the last decade, did not present an opportunity that made the top-echelon free agent interested in playing what might be career-defining parts of his career in New Jersey. That for all of the players departed from Columbus over the franchise’s history, its a franchise that’s made the postseason in four of the last six seasons, boasts a fairly young squad and might be a place he and his family warmed up to living in after it became a reality that he was leaving Calgary. Perhaps more on that can be learned when Gaudreau is introduced to the market on Thursday. But, this will be a shot in the arm to a division rival.

But, I stress: these are things I wonder about. And now, the Devils, who added Erik Haula and Brendan Smith and most notably, Ondrej Palat on a five-year, $30 million deal after Gaudreau made his decision, will return to wondering exactly what’s next for them. The desire to add up front doesn’t appear to be over. They may be done with the market offerings and shift to trades. But, this chapter has ended. The free agent situation that seemed to make sense was not to be. And while we ponder the reasoning, the franchise must again shift back to present reality.