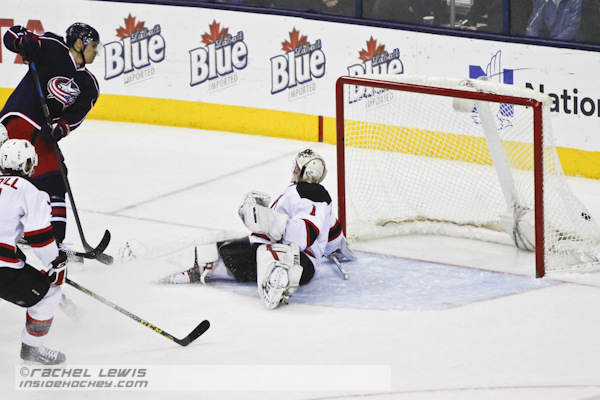 The Devils Are What Everybody Thought They Would Be

The 7-1 drubbing at the hands of the Anaheim Ducks on Monday night was probably a shock to the systems of the Devils. Not only did New Jersey allow a season-high seven goals, but they also witnessed seven goals scored in a game.

A rarity, the Devils had been involved in just seven games since Christmas where the final score exceeded six goals. But for as many goals as Cory Schneider and the Devils weren’t allowing, they also weren’t scoring. Held to two or less goals in 21 of their last 31, New Jersey sits dead last in league-scoring with 154–a full ten goals behind 29th-ranked Toronto, 75 behind league-leading Dallas.

It’s hardly been a kept secret that the Devils are a low-scoring team, who’ve relied on outworking opponent to in exchange for small-margin victories. A success story for much of the 90’s and early 2000’s, it’s grown rather ineffective since the lockout.

They’ve tried addressing the scoring woes with re-acquisitions of former snipers including Brian Rolston (2009) and Jason Arnott (2010), both to no avail. The 2011 acquisition of Ilya Kovalchuk, followed by the ‘contract heard around the world’ partially worked, but his numbers still declined slightly. That didn’t make it any easier when he opted to leave following the 2013-shortened season, just three years into his 15-year, $100 million dollar contract.

One thing the Devils have stayed true to is their identity. More accurately, defense and goaltending. That was solidified with the highway robbery that has become Cory Schneider from Vancouver at the 2013 draft for the ninth overall pick. The organization’s seemingly effortless transition from the future Hall of Famer, Martin Brodeur to the already-Vezina conversation-talking point is enough to make Edmonton collectively barf. Still, for all that is the netminder, sporting the ’35’ jersey, worn only by backup tenders in years past, the excellence has been halted every April since arriving in N.J. and appears to be headed in that direction once again–a fourth-straight season without post-season hockey. For Schneider, a third.

The defense doesn’t boast an Erik Karlsson or Drew Doughty, but has desirable depth and mobility, not to mention a core with an average age of 25.5 and just $7.3 million in player salaries. The depth continues, having drafted a defensemen in the top-sixty five of the last six years. Three of which (Merrill, Larsson, Severson) have seen time in the NHL, meanwhile 2013-pick Steve Santini and 2014-pick Joshua Jacobs are likely going to get looks next season in Albany.

The source of the Devils’ rebuild is offense. The team has been unable to keep up with the progression of the league’s best. Since 2007,  seven forwards have played in 80 or more NHL games. Among them though include: Matt Halischuk (2007, 117th) traded by NJ for Jason Arnott in 2010; Nick Palmieri (2007, 79th) traded for Marek Zidlicky in 2011; Mattias Tedenby (2008, 24th) returned to Europe in 2014; Stefan Matteau (2012, 29th) traded to Montreal at this season’s trade deadline for Devante Smith-Pelly. Adam Henrique, Jacob Josefson and Reid Boucher remain with the ogranization. Only Henrique has exceeded 300 games played and 100 NHL points.

The expectation is that sixth-overall pick in 2015 Pavel Zacha can help fill the puzzle. The 18-year-old Czech forward is leads Sarnia (OHL) with 58 points in 49 games this season.

Presently, the Devils have just a three percent chance at winning the NHL draft lottery, which will be determined following the conclusion of the regular season. The new format allows will determine each of the top three picks via lottery. As of writing this, the Devils are slated to pick 11th overall in Buffalo at the 2016 entry draft.

A forward-heavy draft class, eleventh overall would allow for the Devils to continue addressing needs up front, but certainly an NHL-ready prospect like Auston Matthews, Patrik Laine or Jesse Puljujarvi would be desired.

Rebuilding at the draft has become imperative to success. Perhaps it’s another reason why picks have become an even greater commodity. Shero and company might have set the bar high with their acquisition of Kyle Palmieri from Anaheim at last June’s draft. For Palmieri, the Devils dealt a 2015 second-round pick (later used by Anaheim to acquire Carl Hagelin) and a third round pick. Palmieri has fit in nicely with New Jersey, besting his career-high’s in all offensive categories. It might be unlikely to add another player as impactful as the NJ-native has been, but if the salary cap stays the same or only gradually increases, some teams might become open to trade more of their assets–which would favor the Devils, who might have close to $30 million in cap space.

That could mean the Devils, by default, are among those who pursue Steven Stamkos, if the pending unrestricted free agent manages to make it to the open market come July 1.

While there’s been zero ties to Stamkos coming to New Jersey–the need is apparent. And, the Devils would have plenty of flexibility with just two forwards on the books after 2017. If anything, Shero will have to inquire to do his due diligence. Plus, high numbers have become more routine as of this season. Welcome number 91.

Whether it’s Stamkos, Matthews or somebody else, the team will need to address its depth down the middle. It could be argued as one of the biggest reasons for the scoring woes.

Currently, the Devils are 29th in the league with a 46.7 percentage in the circle. Only Vancouver’s center ice (45.2 percent) is  worse. Of the centers who have taken over 600 draws this season, Travis Zajac sports the only reputable average (51.2). Josefson (47.4), Henrique (45.8) and Gionta (42.4) have each drawn sub-par averages. Josefson (RFA) and Gionta (UFA) might be casualties this summer as a result. Boyd Gordon (Arizona, 58.0); Anton Lander (54.6) and Jarret Stoll (55.7) could be considerations for bottom-six roles to lessen the nightly load on Zajac.

If it seems strange to be talking free agency on St. Patrick’s Day, it’s perhaps indicative of how long the Devils fun run at surpassing expectations lasted. But this was inevitable. And while they remain ‘in the thick of things’ with 12 games remaining, they are a long shot. They’d have to go on a pretty flawless run to make that dream come true. But never say never, I guess. After all, it is March Madness.