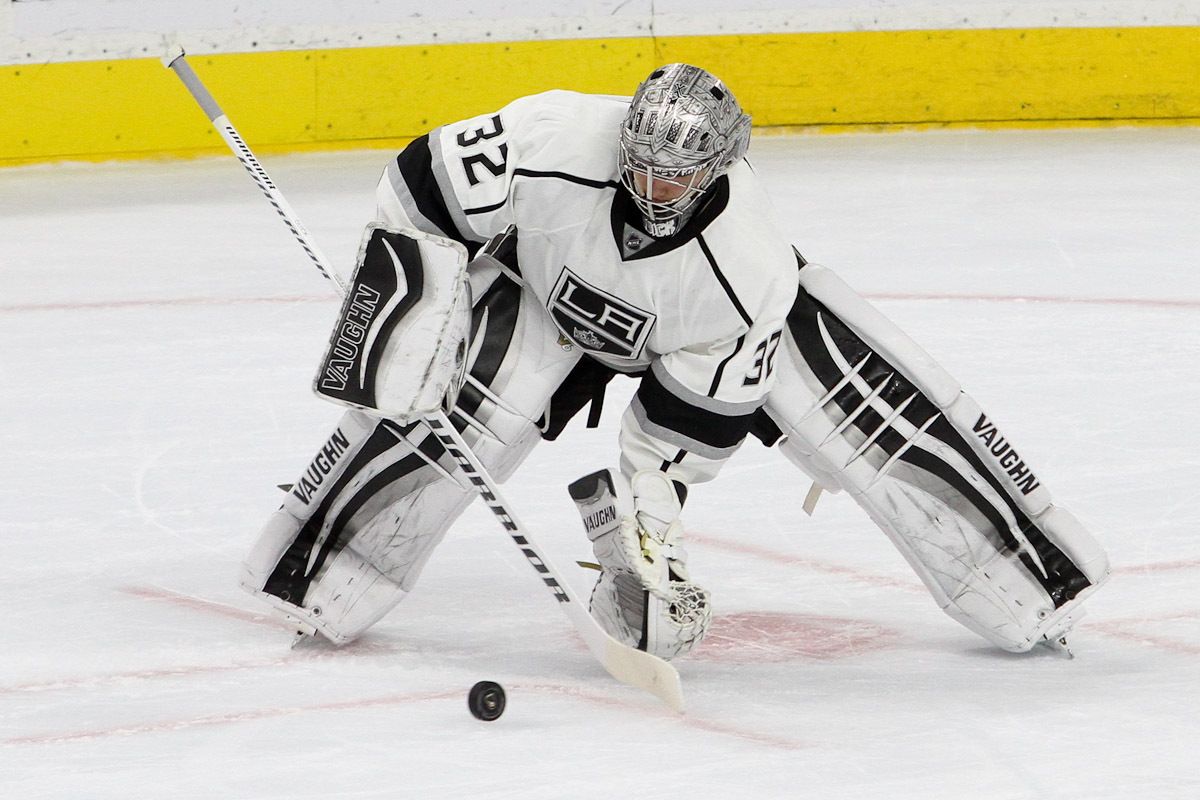 Well, Sutter finally said it: “We took a lot of shots; we always do. Guys don’t have shots, that usually means they’re not quite on their game, but the team we were playing blocks a lot of shots and gets in shooting lanes. We’re not a team that’s going to score a lot of goals, that’s obvious. It’s not all of a sudden we’re going to start scoring goals with a dozen games left or something. We’re going to have to grind it out, and bang away, and, the difference in the game was not any of that. The difference was we did a good job against the top power play in the league. We only took, what, two or three penalties. That is the difference in the hockey game.”

And that pretty much explains the week in Kings-land. A grinding, late, one-goal loss to the Blues, who they really needed to beat. A grinding, late, one-goal win versus the Avalanche. If you can’t beat them when you desperately need points, you don’t desperately need them after all. And a one-period victory versus the Sabres that featured two fortunate occurrences which keep the current roll going—goals by Jarome Iginla and Adrian Kempe, both in the final twenty minutes. As Sutter would later say, “I think, our, I think about the two goals we scored. The oldest player on our team scored a goal, and the youngest player scored a goal. Hopefully in between we can flip a little bit of that around and somebody else will score next game.”

Note that the “right” guys got the assists, with Brown helping on both, Kopitar on the first also, and Doughty on the second.

For Kempe, this marks his second career goal. It was almost as beautiful as the first one, where he peeled off the boards, beat a couple of guys, and put a wrist shot past the netminder. Sutter wasn’t about to give him too much praise, though. He was asked how he would assess the young man since he was moved to center, which was several games ago. “It was not necessarily since we put him at center. We’re a team that was trying to get some more speed in our lineup, so that gives us another fast player.” But he later added, “He’s 21 years old. I’m not going to get too philosophical. He’s got a lot to learn about the game.”

Why did it take until the third period to get, and hold, the lead? The Kings certainly got a lot of shots in frames one and two, to very few for Buffalo. The home team had 15 in the first, 19 in the second. The Sabres, by contrast, roared out to a total of two in period one. They got a more respectable nine in P2. The Kings then scored their two goals on 11 shots in the third, while the Sabres, obviously at some point in desperation mode, got 15.

And they had their power play chances, though they also gave up some to what is within a tick of the most potent PP in the league (you wouldn’t have guessed it, nor would I). But the Kings just couldn’t score, though they put on some exciting plays.

For instance, at regular strength Gaborik and Lewis went two-on-one into the zone. Gaborik held the puck, deked around a guy, had miles of empty space, and got off a shot low. Robin Lehner made a leg save.

The goalie was then down and couldn’t get up, and Brown whipped a shot in that Lehner stopped, though awkwardly, off his body. These were moments when fans looked forward to what they might say had the Kings lost—here were the chances. As it turned out, regrets needed not be expressed.

Jonathan Quick, despite not being tested early, played like his pre-injury self. And the Kings followed what is now known to be their typical game plan. Sutter said this to describe it: “Part of our game is when we have four lines going we are able to [pressure]. It’s not easy to do that, but we as a group do that, four lines and three good pairs of good defensemen, that will do it.”

It will, when the other team doesn’t score , and Quick wants that to happen every night. If it doesn’t, well, hear what Iginla said: “It was nice to start the third with Brown on a rush there.” He went on to describe his goal, which happened at 36 seconds of the third period. “You come to a new team and want to help out. I’ve been given a great shot here playing [on a line] with Kopitar and Brownie. Gaborik before. When you play with guys like that, Kopi, once he gets it down low, he’s got such great vision, once he gets it, you just find a way to get open and get ready to shoot. I’m going to keep working at it. I feel there’s room for improvement.”

Then he repeated essentially what Sutter said. “The veteran group here, they’re used to one-goal games in the third. You can just tell. There’s no panic.” That’s the game plan.

The Kings are now away until Thursday night, when Winnipeg comes to town.