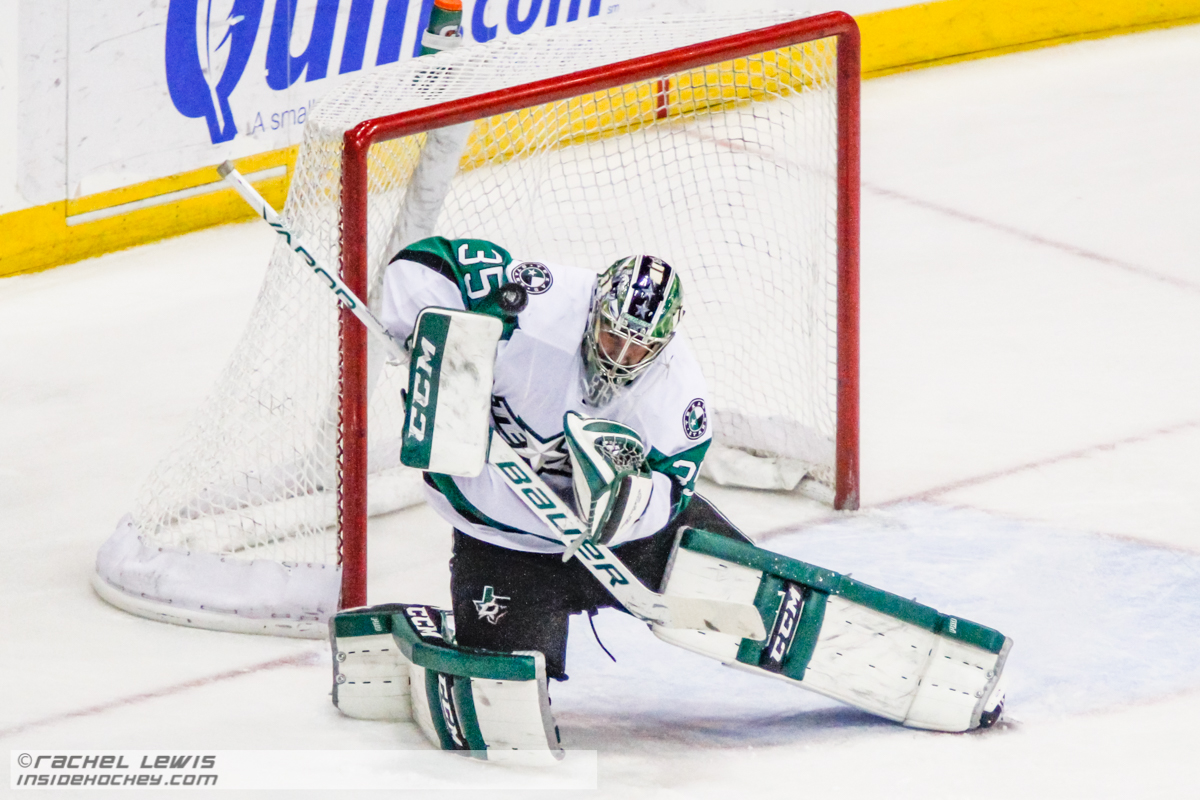 The future for the Dallas Stars is certainly looking bright despite the top team’s absence from the Stanley Cup Playoffs. That’s because their top minor league affiliate, the Cedar Park-based Texas Stars, have reached the American Hockey League’s Calder Cup Finals.

On Sunday afternoon, the AHL Stars also put themselves in a great position to take control of the 2018 Finals with a gutsy 2-1 victory over the host Toronto Marlies at Ricoh Center. Texas reached center stage of the AHL hockey season by defeating Ontario (three games to 1), Tucson (4-1) and Rockford (4-2), while Toronto out-skated Utica (three games to two) before sweeping both Syracuse and Lehigh Valley.

The Stars are making their third trip to the Calder Cup Finals in their nine-year history. They lost to in six games to Hershey in 2010 and defeated St. John’s in five games to claim the Calder Cup in 2014.

The more physical and defensive-minded Stars upended a Marlies squad – the top farm affiliate of the Maple Leafs – that led the American Hockey League with 112 points during the regular season and had gone 7-0 on home ice during the post season.

“This was a big one for our group tonight, getting the split in Toronto especially after having a 4-2 lead (on Saturday).” Stars Coach Derek Laxdal said after his team handed Toronto its first loss in nearly five weeks. “We are settling into the series now.”

Defenseman Gavin Bayreuther connected on a third period power play goal to even the series at one game apiece with the next three games scheduled for Cedar Park. Left wing Curtis McKenzie also scored for the Stars to back the 21-save performance of goalie Mike McKenna. Both teams played a more disciplined style of hockey in the wake of Saturday’s 6-5 verdict captured by Toronto in the series opener.

“I figured the game would tighten up a bit (after Game 1). I think both goaltenders settled in the series and got comfortable” noted Laxdal, whose squad did not face Toronto during the regular season. “Mike (McKenna) was outstanding in the first period.”

The Stars took control in the middle period, drilling 13 shots at Marlies goalie Garret Sparks and tied the game at 2:45 of the second. McKenzie, the team captain and leading scorer who was a member of the 2014 championship squad, scored on a breakaway after gathering in a stretch pass from defenseman Dillon Heatherington and tucking it past Sparks.
Texas netted the game winner on an early third period power play when Bayreuther fired a blast through a maze of players and past Sparks.

“The power play was a key for us in the first three rounds. If you look at the stats early on in the Rockford series, (the IceHogs) were undisciplined and we made them pay for it,” Laxdal said. “(On Saturday in Game One) it gave us a good start in the game and tonight it got us the game winner.”

The Stars were able to shut down Toronto’s ability to generate speed in the neutral zone, thereby slowing their approach to the Stars’ blue line and into their defensive zone.

Texas’ stifling defense also kept the Marlies’ top line of wingers Carl Grundstrom and Andreas Johnsson with center Miro Aaltonen off the score sheet for the second straight game. That explosive trio entered the Finals with a collective 35 points in 13 playoff games.

“They’re a big part of why we’re here and why things have gone so smoothly to this point,” said Marlies Coach Sheldon Keefe. “If we’re going to get control of the series, we’re going to need those guys to be real good and find a way to get through, to get to the net.

“It’s the first time since that Utica series that we’re seeing real depth where, shift to shift, it’s a real battle in terms of who’s going to win that shift, who’s going to gain control of the play. We haven’t seen that in some time. We’re feeling that here now. That’s the way it’s supposed to be. Every game is going to have its own story and (Game Two) was a different story (than Game One),” said Laxdal.

Added Keefe, “The best part of playoffs is being able to respon, and deal with the emotions, the highs and the lows. It’s been nothing but highs for us of late. That’s not reality when you’re trying to win the Calder Cup. We have a chance to respond here now. This is the way playoffs are supposed to be. They’re not supposed to be the way they have been for us of late. You have to be able to deal with these types of things. Now we have a chance to respond. It’s going to be a challenging task, but one I think we’ll be real excited for.”

Toronto won the series opener, 6-5 despite a pair of goals by center Travis Morin. His second tally of the game occurred on a rebound to give Texas a 4-2 lead with three minutes to play in the second period.

But Toronto scored with :15 left in the session, and added three more red lights in the third period to win their 10th straight game. Goals by Toronto left wing Mason Marchment and defenseman Martin Marincin early in the session put the Marlies ahead 5-4. After Stars’ center Justin Dowling (also a member of the Stars’ 2014 Calder Cup championship team) tied the game at five apiece, Marlies left wing Trevor Moore connected on a one-timer on the power play for the deciding goal. McKenzie and center Austin Fyten scored for Texas, which lost for the first time this postseason after scoring the game’s opening goal. Toronto also received goals by defenseman Justin Holl and center Frederik Gauthier.

“(Texas is) a good team,” said Toronto forward Smith. “I don’t know if we were at our best at the beginning, but being down 4-2 with two minutes to go in the second, they really pushed us to the edge and we were able to push back.”

“There were a lot of chunks of this game that weren’t very good for us,” said Marlies coach Keefe. “The fact (is) we survived that and found a way to win. It was ugly for sure.”
The Marlies are trying to become first Maple Leafs farm team to win the Calder Cup since the 1981-82 New Brunswick Hawks, an affiliate they shared with the Chicago Blackhawks. The last time an AHL team fully stocked by the Leafs won it all: the 1967-68 Rochester Americans.