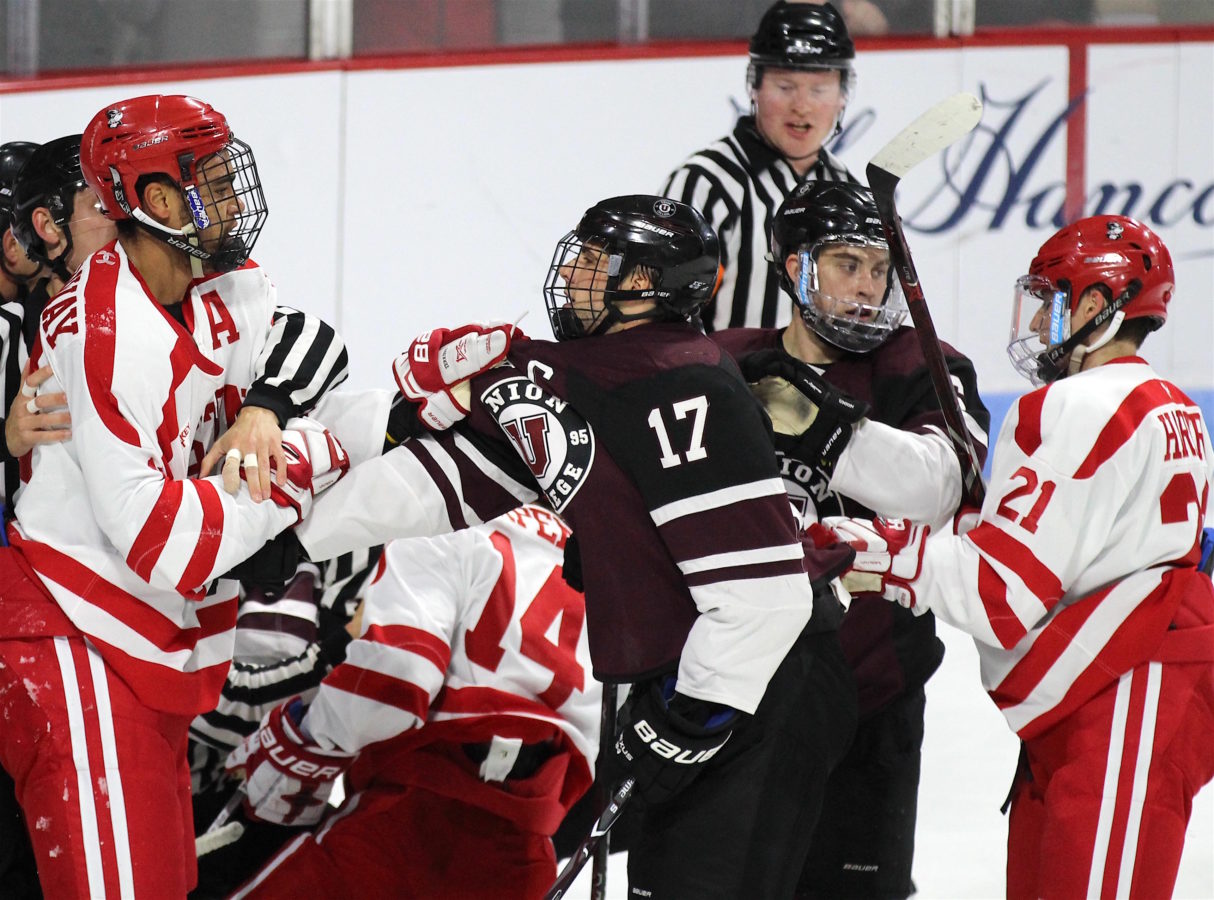 For 100 years, the Boston University Terriers and Boston College Eagles have been warring on the ice. The games have been chippy, physical, and personal between the Green Line rivals. Friday night saw the Terriers walk into Conte Forum looking for a much-needed victory. What they got was another colorful addition to the rivalry, littered with shots, goals, penalties, loud fans, and the highest scoring game in the rivalry since 2010.

BC opened the game with some great shots on BU goalie Jake Oettinger and made the most of their shots. Aapeli Rasanen got to the slot and fired on Oettinger through traffic for a 1-0 BC lead only 1:32 into the game. 44 seconds later, Ron Greco got to a rebound off a Kevin Lohan shot and beat Oettinger for a 2-0 Eagles lead. The capacity crowd at Conte Forum went beserk as Greco scored while the scoring on Rasanen’s goal was announced.

The Terriers rallied themselves and got some help. Brandon Hickey fired a shot from above the left circle that tipped off an Eagle by goalie Joseph Woll and BU was on the board. 2:10 later, BU evened the game on a Logan Cockerill rip from the slot that caught the top shelf. BU had climbed out of a 2-0 hole and dodged some Eagle’s chances on a Nikolas Olsson hitting from behind penalty. The first-period scoring was not yet done. Early in the period, Brady Tkachuk got a chance to shoot on a breakaway that Woll saved. In the final minutes of the frame, BU went on the penalty kill. The puck bounced out to center ice, where Tkachuk corralled it. The freshman advanced on Woll and ripped it by the decorated goalie for a 3-2 Terrier lead going into intermission. He talked about that shot after the game.

“I’ve been trying a high move on breakaway shots in practice. That first shot, I panicked and lost control. I talked to Ty Amonte on the bench and he told me ‘You’ve gotta go back to that move.’ So luckily I got that second chance and I was happy with the outcome.”

BC gathered themselves in the locker room and came out firing to open the second. Ron Greco got his second goal of the game when the puck came his way on a third chance opportunity to beat Oettinger. That goal came 2:41 into the frame. For the next six minutes, BU tilted the ice in their favor.

Jacob Tortora was called for a tripping penalty and Chad Krys netted a power play goal on a bounce to the right circle. Right before the 8-minute mark, Terrier Captain Brandon Hickey netted his second goal of the game on a shot from the slot. BU also drew a Luke McInnis hooking penalty on the goal. On the ensuing power play, BU extended the lead to three on a Bobo Carpenter doorstep shot to take a 6-3 lead.

BC started getting some chances, but Oettinger kept BC off the board with 14 of his 29 saves in the period. BC made the score tighter right before the second intermission. Brien Diffley drew a hooking penalty and Julius Mattila made the Terriers pay with a right circle slap shot in the final minute of the period. BU still took a 6-4 lead into the final frame.

The scoring slowed down in the final frame. The teams only had one penalty, a David Cotton hitting from behind penalty, and 16 shots, the same number BC got by themselves in the prior period.

The score stayed 6-4 until late in the game when BC pulled Joseph Woll looking for the final offensive push. Instead, Patrick Harper cleared the puck out of his zone, found Shane Bowers and the freshman deposited the puck in BC’s empty net for a 7-4 BU victory.

BU walked out of Conte only winning one period’s shot totals (16-8 in the 1st) and climbing out of a 2-0 hole after the first 2:16 of the game. Terrier Head Coach David Quinn was proud of his team’s efforts but harped on the need for improvement after the game.

“It’s 2-0 before people could put cream in their coffee and it looked like it’d be a long night,” Quinn said. “We started doing the things we needed to do to have success and showed resolve. Our penalty kill stood tall and did a great job tonight. Our puck control got better tonight.

That being said, we made a lot of mistakes. Two things must improve: Our puck management and our D Zone coverage must improve. We had many points when we didn’t know whether we were on offense or defense. We must do a better job of thinking ‘if you don’t know where you are, play defense.'”

BC watched their lead evaporate in the first period and their defense crumble in the second period. Jerry York was disappointed with the performance.

“Certainly not a great game from our bench. We scored early and got really excited. We lost our poise. The shorthanded goal was the turning point of the game. We’ll get some sleep, recover, watch tape and see what adjustments we can make, and go play down the street.”

Ron Greco set his career high with two goals, the first multi-goal game of his career.