Terriers Swept Away by Huskies

Boston University has dominated the recent matchups with crosstown rival Northeastern. The Terriers have gone 14-5-1 in the twenty games since Jim Madigan took over coaching for the Huskies in 2011. However, momentum is changing. Northeastern crushed BU 4-1 last weekend in Agganis Arena.

With a raucous crowd in Matthews Arena, the Huskies looked for their second straight win over the Terriers. To add injury to insult, BU was without Nikolas Olsson due to suspension and Captain Brandon Hickey, due to an upper-body injury.

The hungry Huskies sensed a weakened opponent and pounced, outshooting BU 9-6 in the first period, and drawing first blood. Only three minutes into the game, Zach Solow intercepted a Ty Amonte pass intended for Ryan Cloonan. Solow advanced, passed the puck to Nolan Stevens, and the Huskies were on the board. Stevens picked up where he left off against BU, scoring his fourth goal in two games against the Terriers.

Three minutes later, Northeastern caused chaos in front of BU goaltender Jake Oettinger and got him off balance. Adam Gaudette tracked down the puck and fired it by Oettinger from the slot. BU changed momentum, peppering Northeastern goalie Cayden Primeau with some shots at the end of the period, but Northeastern took a 2-0 lead into the intermission. 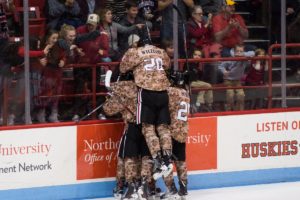 Patrick Harper opened up the second period with a BU goal. The sophomore scored only 42 seconds into the period on a delayed penalty against Northeastern from the high slot. BU looked to use the ensuing power play to tie the game. They did outshoot Northeastern 15-7 in the period.

Alas, Primeau, filling in while usual starter Ryan Ruck is out after a concussion, saved every other shot in the period. Northeastern turned the momentum late in the period with a John MacLeod interference penalty. BU almost killed the power play, but Adam Gaudette scored from the left of the goalie crease to kill any BU momentum. Northeastern led 3-1 at the second intermission.

The Terriers outshot Northeastern again in the third, 13-7. Nevertheless, BU’s defense crumbled in the final frame. Cayden Primeau made 13 of his 33 saves in the period, and Northeastern found the net three times in the period. Lincoln Griffin found twine twice.

The first was on a power play following a Jordan Greenway boarding call. The Junior and alternate captain tipped in a Zach Solow wrister to make it 4-1.

Griffin’s second goal was on a rush for a loose puck. He deeked under Ty Amonte and drew Jake Oettinger out of his net. Griffin put home the shot to give Northeastern a 5-1 lead and chase Jake Oettinger from BU’s net after his worst start as a Terrier.

Oettinger allowed five goals on only 21 shots, making only 16 saves through most of three periods. Max Prawdzik replaced him and did not fare much better.  The red-shirt sophomore faced only two shots and allowed one final goal, a Bobby Hampton power-play goal with seven seconds left in the game. The penalty was a Patrick Curry minor call for charging and a misconduct penalty, the third misconduct against BU in two games against Northeastern.

The Huskies completed a regular season sweep of the Terriers, winning 6-1. Jim Madigan was happy with his team’s effort. “We have enough firepower on this team. If we defend, we’ll be a great team. We defended tonight. We’ve bought into winning in a way no group has in my time here. There’s still a long way to go, but we’re on the right track.”

When asked about why he returned to school, Adam Gaudette spoke only of the program’s goals. “We have plenty left to accomplish here. We want to win the Beanpot and the Hockey East. And we want a crack at the National Championship. We have the team to do that here.” Northeastern goes to 6-2-1 overall and 4-0-0 in Hockey East. The Huskies travel to Lowell to take on the Riverhawks at the Tsongas Center tomorrow night. Puck drops at 7 pm.

Terrier Coach David Quinn was disappointed but remained optimistic about his team following the game.

“I think that last shot epitomized the game. Their shots found the net and ours didn’t. I know I sound crazy, but there’s plenty we can take from that game and build on. We got great shots and made their defense work. I feel like Bill Belichick, getting blown out by Kansas City and needing to get ready for tomorrow.”

Tonight's win marks the first time in program history that Northeastern has held Boston University to one goal or fewer twice in the same season (233 all-time meetings).#GoNU | #RedBlackOnePack pic.twitter.com/pRaOuqxvGZ

BU falls to 4-6-1 overall and 2-3-1 in conference. The Terriers regroup to face the New Hampshire Wildcats at Agganis Arena tomorrow night at 7 pm.