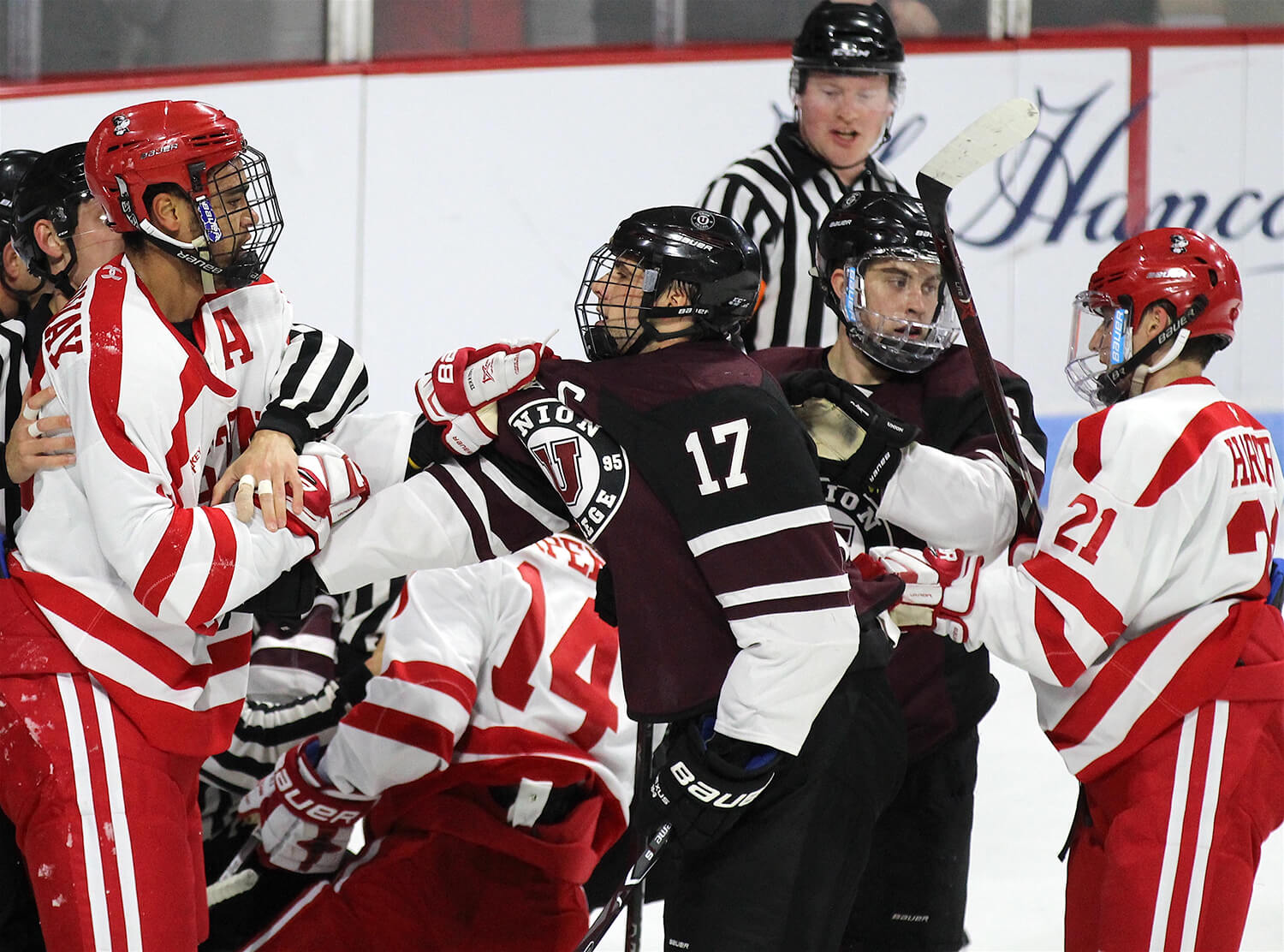 The college hockey season got underway with a bang tonight. The Boston University Terriers and the Union College Dutchmen brought the hits and the excitement in the sport’s opening act at Agganis Arena. Both teams played a physical style that tried to wear the other down. Ultimately, BU withstood the punishment and emerged with an opening game victory.

The first period started clean and hard. The teams were fresh after the summertime and eager to hit the ice. That eagerness shortly turned to active hits and penalties. Brady Tkachuk and Brendan Taylor, the former playing in his first collegiate game, drew offsetting penalties. Two minutes after the offsetting whistles, Bobo Carpenter was called for a tripping penalty. Forty-nine seconds into the power play, Brett Supinsky fired home a pass from Anthony Rinaldi in the slot to give the Dutchmen a 1-0 lead.

Almost immediately after, Ryan Scarfo was called for a hooking penalty. Late into the ensuing power play, BU moved the puck beautifully. Nikolas Olsson found Jordan Greenway on the doorstep for a shot. Jake Kupisky made the save, but the puck found its way to Patrick Harper on the left post. Harper put it home for his first goal of the year. The period ended in a 1-1 tie and saw seven penalties between the two teams.

The second period saw more hits and physical play, but no goals. Jake Oettinger and Kupisky dueled in net, making 12 and 11 saves in net respectively. The teams committed five more penalties in the second period. The only bad take was a too many men on the ice penalty by BU. That penalty produced the best chances of the period, notably for Brett Supinski, who got two of his seven shots in the game on that man advantage. No one could break the tie, and after a few punches traded by Jordan Greenway and J.C. Brassard, the Terriers and Dutchmen went into the second intermission tied at 1-1.

BU cranked up the offense to start the third period. They got a power play on a tripping penalty against Dutchman Captain Cole Maier. They could not get a shot in the first half, despite getting three solid looks. The Terriers killed off a Drew Melanson slashing penalty a few minutes later. After the graduate student got out of the box, BU looked for a chance to take the lead. With 8:59 left to go in regulation, they got it. Brett Supinski, the best skater for the Dutchmen, committed a hooking penalty. BU worked the puck into position and struck for the lead. Harper lasered a pass to Dante Fabbro, who blasted home a shot from the left circle. Union got some good looks in response, but Oettinger stonewalled the Dutchmen, making 11 saves in the period.

With 1:57 left in the game, Union pulled their goalie to get an extra skater. Harper forced a turnover, raced down the loose puck, and deposited it in Union’s goal for a 3-1 lead. Union tried to get some offense by pulling their goalie again. Instead, BU caught twine with ten seconds left when Tkachuk found Shane Bowers in front of the net to close out the game for a 4-1 Boston University win.

BU’s Harper led the way with two goals and an assist for a three-point opener. Fabbro was the second star, scoring the game-winning goal in the third. Brett Supinski was the third star with the only Union goal.

The Terriers Oettinger was impressive and showed that he was not a freshman anymore, making 31 saves. Kupsky was the best player on the ice for the Dutchmen, making 39 saves against a potent Terrier unit. Union’s head coach, Rick Bennet, acknowledged that BU played a harder and longer game than his team did.

BU’s head coach, David Quinn, agreed, but noted that it was a feel out game.

“This early in the season, you’re still trying to feel out what kind of team you have in front of you. I like what I saw tonight. I think Union had plenty they liked as well.”

Union takes a trip to the AMSOIL Arena in Duluth, MN, next weekend for the Ice Breaker Tournament. Their first game is against Michigan Tech on Friday, October 6th, at 5:07 PM. They’ll then play either Minnesota or Minnesota-Duluth the next night.

Boston University’s next game is an exhibition game against Prince Edward Island at Agganis Arena on Sunday, October 1st at 5 pm. Their next regular season game will be on Sunday, October 8th, when the Terriers travel to Hamden, CT, to take on the Quinnipiac University Bobcats.