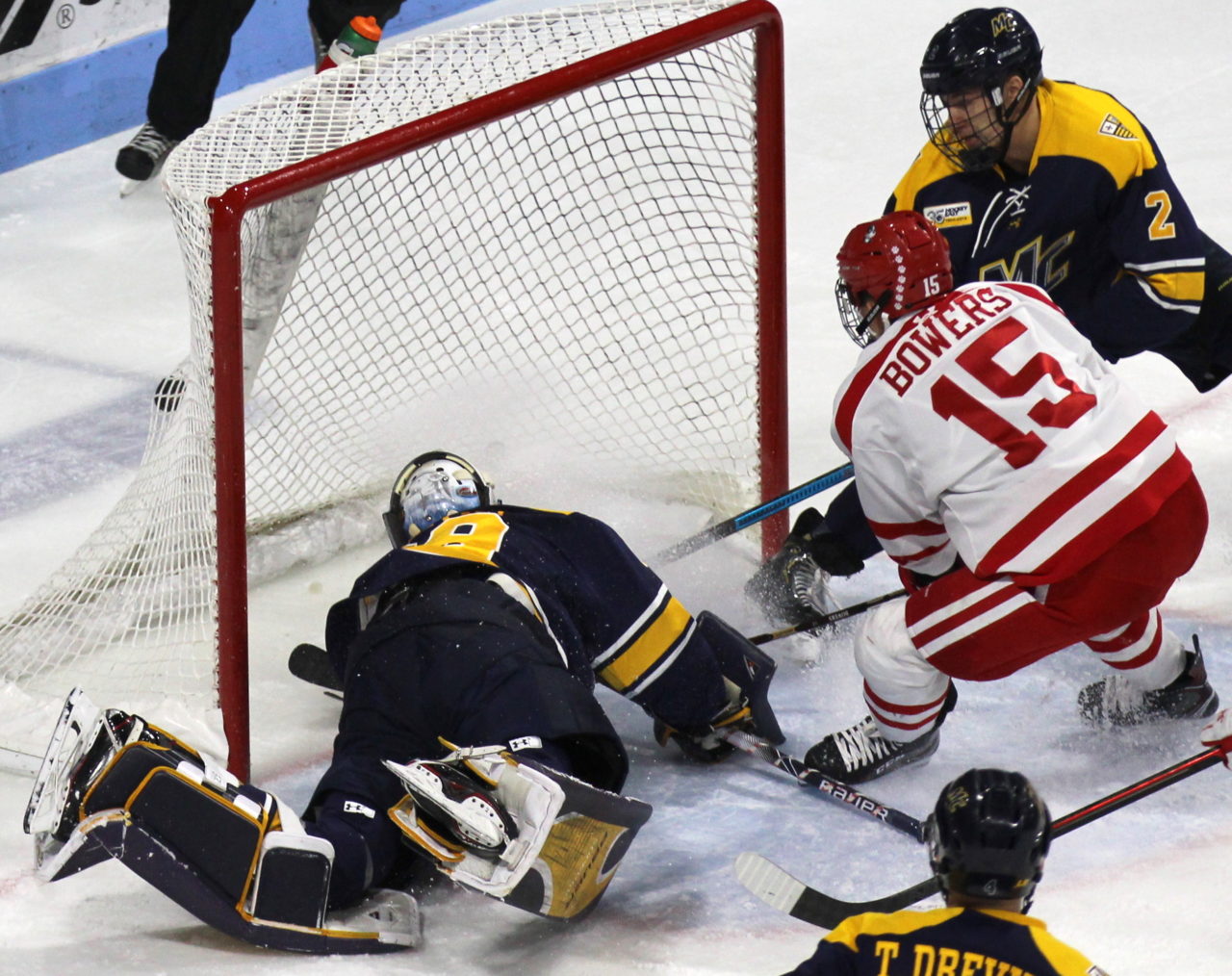 Boston, MA- Saturday night brought heartbreak to Boston University when former Terrier Brandon Fortunato scored two goals, including one in the dying seconds, stole a 4-3 win for Quinnipiac. The team had a quick turnaround opportunity with a rare Monday matinee against the Merrimack College Warriors. BU seized the opportunity and exploded for their best offensive outburst of the season.

Merrimack did get the first tally of the game. Derek Petti won a faceoff and Chase Gresock tracked the puck. The freshman from Powell, OH, whipped a shot through Terrier goalie Jake Oettinger. BU regrouped when Jordan Seyfert took a hooking minor. Sophomore defenseman David Farrance uncorked a wicked slapshot that found a lane through five different skaters and Merrimack goalie Craig Pantano to tie the game.

BU continued attacking and was rewarded with a long-awaited goal. Senior forward Ryan Cloonan was promoted to the top line following three points in the first four games of the new year. However, he had not scored a goal since November 6th, 2015, against Northeastern. In the final minute of the first period, Cloonan tracked a loose puck off the pipe and scored his first goal in 93 collegiate games, giving his Terriers a 2-1 intermission lead.

BU rode the momentum into a dynamite second period, outshooting Merrimack 18-10, and capitalizing on mistakes. After a Too-Many-Men-on-the-Ice minor, Max Willman stripped the MC power play unit and drove the net. The senior from Barnstable, MA, dangled and roofed a shot on Pantano for a 3-1 lead. Patrick Harper followed not long after with a rebound goal through traffic for a 4-1 lead. Merrimack did answer when Jonathan Kovacevic fed a stretch pass to Logan Drevitch, who drove and five-holed Oettinger for to cut the lead down to 4-2 twenty seconds after Harper’s goal. The score stayed as such into intermission.

The Terriers began the third by killing a power play and getting one of their own. The advantage saw Dante Fabbro whip a wrister 2:12 into the frame. BU got a fourth power play shortly later and Shane Bowers cleaned a loose puck off the goal line for BU’s sixth of the night and third power play on four tries. David Farrance added one more goal with a high circle shot and ended the scoring at 7-2.

Extracurriculars defines the closing minutes of the game. On a Merrimack power play, Alex Carle hit Logan Cockerill and drew no whistle. Seconds later, Cockerill engaged Carle with a headlock and chuck to the ice. He left with a five-minute fighting major and a game misconduct while Carle and Logan Drevitch were both hit with roughing minors as well. The teams skated out the final, mostly special teams filled, minutes and BU skated off with a victory.

“The game got away from us” explained Merrimack Head Coach Scott Borek. “I thought we were playing really well in the first. Their power play got them going in the first. We didn’t handle their special teams at all tonight. They took advantage of it.”

The Warriors travel to Burlington, VT next weekend to face the Vermont Catamounts. Puck drops on both Friday and Saturday nights at 7 pm ET at Gutterson Fieldhouse.

BU improves to 9-9-3 and 8-5-2 in HEA. They sit in fourth place, three points clear of Lowell, albeit with at least two more HEA games played than anyone other than Merrimack.

“Good bounce-back win. Special teams, that was the best they’ve been since we’ve been back,” said Albie O’Connell. On Ryan Cloonan’s effort, “A lot of it was confidence for him. When he came in as a freshman, he was leading our team in scoring for a while. And then he just suffered from not scoring, got moved around a bit, and just couldn’t get out of it. But the year we went to Fargo, he was our third line center. He was a big part of our team. He’s been giving us winning hockey. He’s been really effective. He’s just not been as productive as we’d like and I’m sure he’d probably like.”

The Terriers host Arizona State at Agganis Arena next weekend. Puck drops at 7:30 pm ET on Friday, the 25th, and at 7 pm ET on Saturday, the 26th.