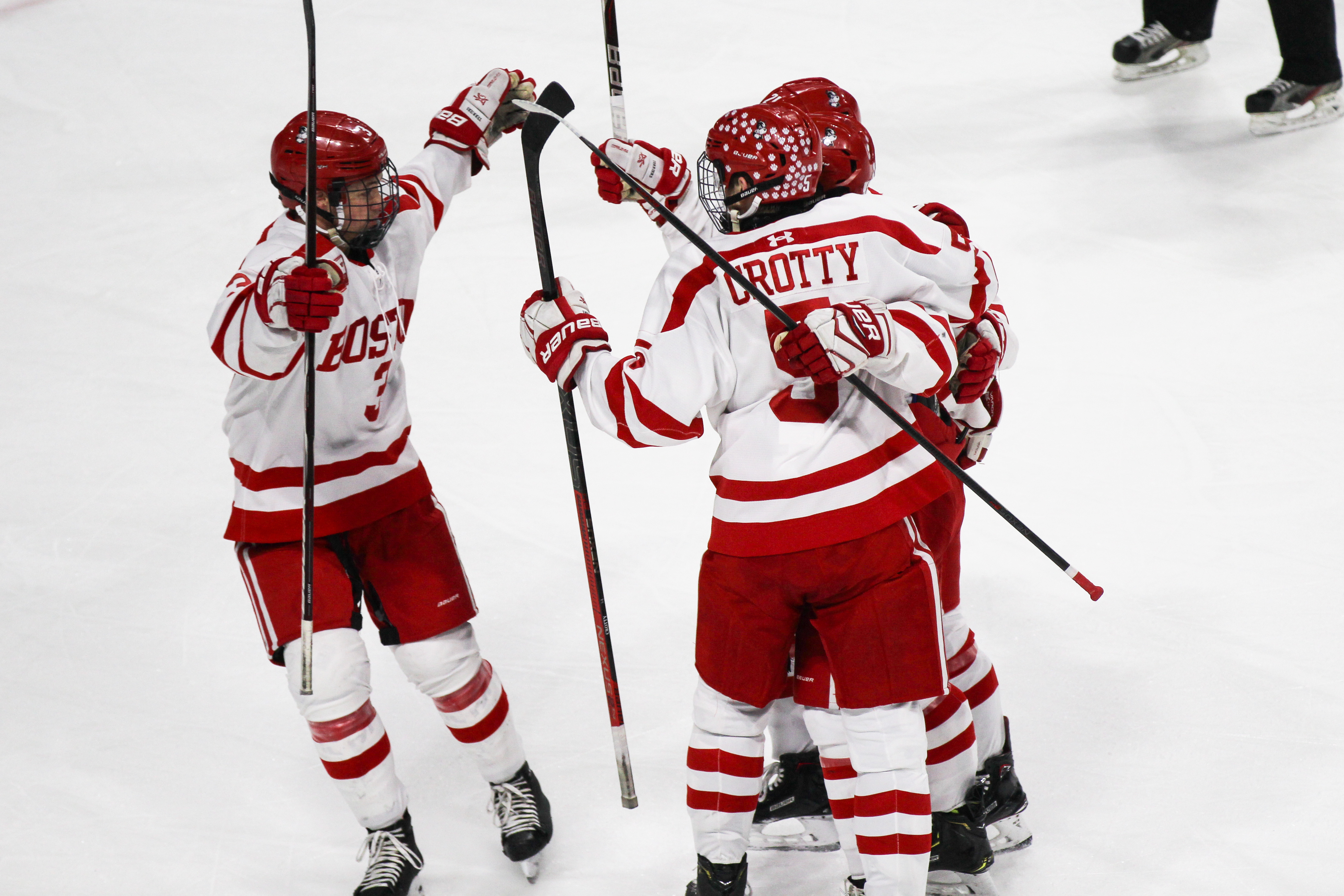 Lowell meanwhile was the nation’s hottest team with a ten game point streak in January and early February. They closed the month slumping but earned home ice and waged war with the Terriers. BU’s talent and goaltending force showed up in a 3-0 Game One win on Friday night. Saturday saw a war of attrition that the Terriers almost came back in, but lost 6-4. The game saw 22 penalties called, including five majors and misconduct infractions, for a total of 99 penalty minutes. With a testy air lingering, the teams concluded their series on Sunday afternoon and the game belonged to BU.

A motivated Terrier team broke the ice 3:28 into proceedings when Chad Krys capped a rush with his eighth goal of the season. BU was denied a goal thanks to a high stick whistle. Breakout star and first-round Flyers draft pick Joel Farabee got the goal back when he snuck behind the Lowell defense and ripped his 17th goal of the season. Patrick Harper finished the offensive outburst with his fifth of the year to chase Christoffer Hernberg from what ended up being his final collegiate game. The Espoo, Finland, native stopped 10 shots on 13 pucks faced.

Tyler Wall entered the net and stopped all 15 shots he faced in the final 40:28.

Neither team broke through for a score in the second. The only notable event was when Joel Farabee was checked knee-to-knee at the blue line after a whistle. The Cicero, NY, native was helped to the bench but stayed on the bench. He ended up playing a few shifts in the finale and will be ready for next week.

Lowell broke the shutout with a Kenny Hausinger top corner shot 8:02 into the final period. They got no closer. Jake Oettinger slammed the door and stopped 18 of 19 shots faced. BU sophomore from New Canaan, CT, and Nashville Predators draft pick, Patrick Harper capped the night with an empty net goal for his third point of the night. He assisted on Krys’s goal to start the night.

The 4-1 BU win ends the UMass Lowell season with a 19-13-5 record. The Riverhawks went from a lock in the NCAA Tournament to missing the dance for the second year consecutively.

“I didn’t like our start,” commented Lowell Head Coach Norm Bazin. “It’s an awfully big hole to come back from; three goals. I thought we made it exciting. We couldn’t convert. Start of the third, obviously getting that goal, we could’ve made it interesting if we got the next one. But it didn’t happen.”

BU improves to 15-17-4 and appears to be mirroring their 2018 Hockey East Tournament run, in which they bounced up and down the standings before reaching. Head Coach Albie O’Connell praised his team’s resilience and improved play at the right time.

“I felt we had a lot of energy, a lot of enthusiasm tonight, a lot of motivation,” O’Connell said. “We’ve been in this situation before, on the ropes last year and we wanted to keep playing. The guys wanna keep playing this year too. I don’t think we had any guys that played poorly.”

This is the 25th time BU has played in the Hockey East semi-finals, a conference record. They will face the Northeastern Huskies at the TD Garden. Puck drops at 4 pm.

Boston College and Massachusetts play the late game on Friday at 7:30.