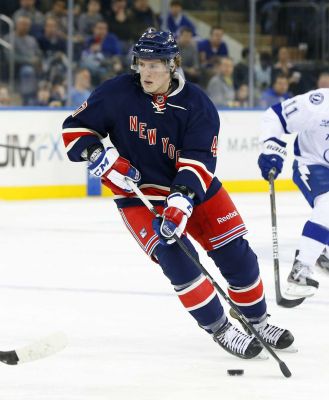 HERSHEY, Penn- It’s a sad day to be a Wolf, but come on we’ve all had that one boss (or professor if you haven’t entered the turbulent adult world yet) that you would do anything to just get the last laugh on. You could tell by Kris Newbury’s movement on the ice that he was soaking up every ounce of the Hershey Bears’ victory this evening. Can’t you just picture him in the locker room pulling his pads off and shaking the sweat from his hair, taking in the victory of this game that he was such a huge part of against the team he once called his own.

It was a rare non-sell out for Hershey with an announced crowd of 8,971 fans lining the Giant Center. Though the smaller than usual crowd seemed to be filled with energy as dancing fans popped on and off the jumbotron, the game itself got off to a relatively slow start through the first few minutes. the Hartford Wolf Pack seemed to eventually find their composure early on, building a 2-0 lead on the back of goalie Cedrick Desjardins, who came into tonight’s game with a record of 4-0-0. But while Desjardins stood on his head through two periods, it was simply not enough.

Perhaps The Wolf Pack’s downfall for Saturday night’s loss has been the season long the lack of player consistency. I don’t mean the players aren’t playing up to their full potential, but recently the team has had to deal with players coming in and out due to the parent club, the New York Rangers, facing numerous injuries the past couple of weeks.

Tonight, however, it appeared that the team was finally back together. Chris Mueller and Dylan Mcllrath made their returns to the team. Mcllrath had a bit of a rough game, as Hershey’s first goal was a result of a deflection off of him.

A bit painful on their part considering Hartford controlled the game through two periods after goals by leading scorer Oscar Lindberg at 14:30 in the first period and 8:16 in the second period for JT Miller. Despite the numerous power play opportunities that were given as a result of some sloppy Hartford play, Hershey still couldn’t capitalize and were thwarted on any attempts to get by Desjardins. Of course until the third period…
After all the back and forth, pushing and shoving in the first two periods, Hershey finally had enough. Hershey’s second goal came in strong from defensemen Connor Carrick, a deep shot that escaped past Desjardins.

At 16:42 of the third period Newbury was able to get revenge against the team he once proudly represented, with a bit of good luck, he deflected in the game-winning goal. And to top it off he even got the empty netter with 7.8 seconds left to seal the deal.

The Wolf Pack and Bears face off again tomorrow in Hershey, Sunday the 9th, at 5p.m.

Tonight’s goal for Oscar Lindberg was his sixth of the season, which leads the team.

Tonight’s goal for JT Miller was his fourth of the season.