Boston, MA- The Maine Black Bears and Boston University Terriers have written middling seasons through nearly two full months of the college hockey season. They both have considerably more talent than their near .500 records suggest and both offer routine frustrations to their coaches. Still, their matchups are entertaining hockey. The traditional Hockey East rivals faced off on Friday night with BU potting a late third-period goal to claim a 3-2 victory. They played again on Saturday night to conclude their weekends. Their matchup had all the hallmarks of classic BU vs Maine games: hard hits, penalties, quality offense, and sharp goaltending.

The opening frame was a pretty even match. BU only won the shot total 13-11, both goaltenders made strong saves, each team lost a player, and each got one power play. The difference was the results of those power plays. Mitchell Fossier feathered a backhanded putback of a Chase Pearson shot through Jake Oettinger to stake Maine to a lead halfway through the frame. BU’s opportunity came with five minutes left in the period after Pearson’s own boarding call.

Despite the chances, Black Bear sophomore Jeremy Swayman stopped all four power play shots he saw and all 13 shots he faced in the frame. Between the two penalties, Maine’s Simon Butala and BU’s David Farrance tangled up after a rush to the net and received five for facemasks and automatic ejections for a game misconduct. With each down a man and Maine ahead 1-0, intermission hit. 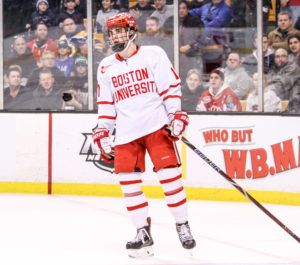 Dante Fabbro relaxes after a near miss at the empty net.

Chase Pearson again showed his skill on a Black Bear rush early in the second period. He potted a Fossier pass through an oversliding Oettinger to extend the Maine lead to 2-0 3:11 into the second. The rush also came 16 seconds after Bobo Carpenter and Rob Michel sat for matching slashing minors, leading to 4-on-4 skating and Maine’s chance to flaunt special teams skill.

BU had an offensive answer near the midpoint of the frame. They peppered Swayman with shots with their best shift of the frame and Bobo Carpenter finished off the shift with his sixth tally of the year. BU climbed no closer before intermission and trailed 2-1 at the break.

BU seized complete momentum in the third, outshooting Maine 15-3 in the final 20 minutes. None of their rushes, shots, or chances cracked Jeremy Swayman and the sophomore from Anchorage, AK, stole the night for Maine. Pearson fired a shot from his own blue line into an empty net to conclude the scoring at 3-1 in Maine’s favor.

Swayman’s 40 save effort is the third highest on the year for the Bruins’ draft selection. Chase Pearson recorded a three-point night for the first time this year and a multi-point game for the third time this season. Head Coach Red Gendron was pleased with his team’s outcome.

“I thought our team played a pretty good game,” Gendron said. “We were sound defensively and played a pretty solid game. ” On Pearson’s performance, Gendron was highly complimentary. “He’s obviously a terrific player. His father was an NHL player, and he was raised to be a hockey player. I don’t think people are necessarily born to be leaders, but it comes more naturally to certain people. I think he has some abilities that way.”

Maine improves to 4-5-1 overall and 2-3-1 in Hockey East. They return to Orono next weekend to host the Quinnipiac Bobcats. Puck drops at 7 pm on Friday the 23rd and 7:30 pm on Saturday the 24th at the Alfond Arena.

Bobo Carpenter and Dante Fabbro both extended their point streaks to five games. Despite that, Fabbro was disappointed after the loss.

“You say five-game point streak, but all I’m caring about is winning and helping this team get on the right direction,” Fabbro said. “I love to compete; I hate losing. We sometimes shoot ourselves in the foot. I think we saw some plays that aren’t characteristic of me tonight.”

BU drops to 3-5-1 overall and 3-3-1 in Hockey East. They travel to Belfast, Northern Ireland, to participate in the Friendship Four next weekend. Their plane leaves Sunday night from Logan Airport in Boston. They’ll spend the week across the pond teaching hockey to the local kids, learning about the history of the area, both recent and long-term, and play two games at the SSE Arena. First, is conference foe UConn at 2 pm Eastern, 7 pm GMT, on Friday. Saturday will give them either Union or Yale. They return home after Thanksgiving week to face archrival Boston College in a home-and-home on November 30th and December 1st.