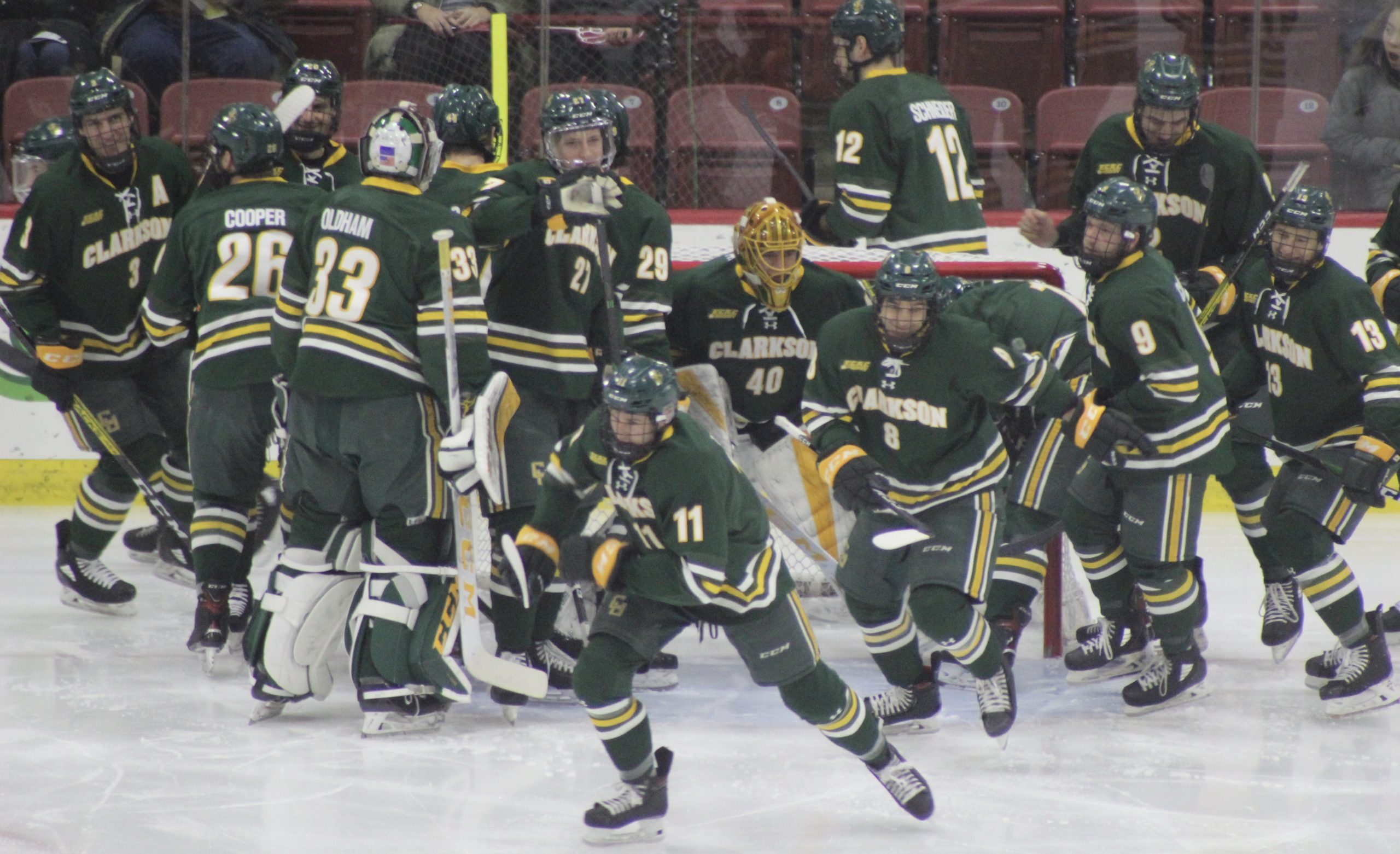 Allston, MA – The #7 Clarkson Golden Knights rode four first period goals to a 5-3 road win over the #16 Harvard Crimson in front of 1,912 at the Bright-Landry Center. Graduate transfer student Frank Marotte (34 saves) back-stopped the Golden Knights to two valuable ECAC points as the Crimson peppered the visitors net with 17 third period shots on goal in a frantic bid to force overtime.

Harvard center Jack Drury was slashed by Jack Jacome just two seconds into the game giving the Crimson the early man advantage. The Clarkson penalty kill was able to keep the Crimson from getting into a rhythm on the power play with two short-handed bids of their own. Junior Zach Tsekos went one on against defenseman Reilly Walsh and had his chance go just wide on first-year goalie Mitchell Gibson. Devin Brousseau followed with a rush of his own past defenseman Jace Foskey that Gibson turned aside.

Casey Dornbach put the Crimson ahead 1-0 when he beat Marotte with a slapshot at 4:21. The unassisted strike was the 10th goal of the season for the sophomore from Edina, MN.

Nathan Krusko was called for Roughing at 6:08 followed by Henry Thrun for Tripping at 6:34 giving the Golden Knights a five on three. Initially the Crimson and Gibson were up to the kill but defenseman Connor McCarthy‘s slapshot from the top of the right circle tied the game 1-1 at 7:30. McCarthy’s second goal in two nights was assisted by Brousseau and Tsekos.

Sophomore Josh Dunne gave Clarkson the lead at 9:20 when he took a Haralds Egle pass in front of Gibson and roofed the puck top corner. Dunne’s ninth was also assisted by Brousseau.

Jack Donato was whistled for Hooking at 14:23. Egle would make the Crimson pay at 15:54 when he walked out of the corner and beat Gibson with a wrist shot high for the 3-1 lead. Egle’s 11th goal was assisted by McCarthy and Dunne. Egle leds the ECAC with 27 points. Egle’s goal was also his 100th career point.

Just nineteen seconds later sophomore Adam Tisdale‘s fifth of the season made it 4-1 Clarkson when he beat Gibson glove side.

Clarkson was caught for Too Many Men on the Ice at 18:24. Twenty-one seconds later the ECAC’s Rookie of the Month for December Nick Abruzzese nabbed the first of his two goals in the game when his wrist shot beat Marotte. The first year forward’s goal was his 20th point in his 17th game as a member of the Crimson.

The Golden Knights outshot the Crimson 14-10 for the period. Harvard won the face-off battle 16-10.

The second period was a scoreless, penalty infused slough while the snow continued to pile outside. Four penalties apiece for the two teams. Clarkson again outshot Harvard 11-10 while the Crimson maintained their edge at the face-off dot 20-8.

Harvard made a game of it early in the third when Abruzzese’s second of the night cut the score to 4-3 at 3:02. Abruzzese darted in front of Marotte and deked the goalie and slid the puck around his outstretched arm for his eighth of the year. Drury and Thrun were given the assists on the play.

A Hooking call on forward Anthony Callin at 6:10 gave Harvard a power play. Drury had three whacks at the puck in front of Marotte but was unable to poke the puck past him to tie the game.

At 11:34 defenseman Greg Moro was whistled for Tripping putting the Golden Knights on the penalty kill once again. The Crimson were unable to muster much in the way of offense. Sophomore Chris Klack had a big block on a Crimson slapshot from the blue line.

With a face-off coming in the Clarkson zone, Harvard used their timeout and pulled Gibson for the extra attacker. Klack was rewarded for his earlier efforts as he sealed the game for the visiting Golden Knights with an empty net goal at 18:46. The unassisted goal was his third of the year.

“I thought we were really good early,” said Clarkson coach Casey Jones. “They (Harvard) had a push back there in the end of the game. But we came out, we were disappointed last night (3-2 loss at Dartmouth). I thought our first period really set the tone for us all night.”

“I thought tonight we came out with a purpose and it ended up as the game went on I lost a lot of my bench. We had the power plays and penalty kills and it was back and forth. We lost a little bit of our edge. It was the ebbs and flows. But it was a good hockey game.”

“It was a tough one. I thought we battled hard. We dug ourselves a hole in the first period,” said Harvard coach Ted Donato. “We weren’t able to stop the bleeding. We got the quick goal to start the game but we put ourselves down in a five on three, a couple of times tonight and that’s a recipe for disaster.”

“After the fact that it was 4-1, I like that we dug in and started to play the way we’re capable of,” added Donato. “We had looks in the third period but I give them (Clarkson) credit, they battled, they jumped out to the lead.”

“We need to play more intelligently. I liked our compete level and I liked our work ethic. I thought we did. a lot of good things but when you take that many penalties you put yourself behind the 8-ball.”

Clarkson hosts Arizona St. for a weekend series on Friday and Saturday at Cheel Arena. The Crimson travel to Colgate on Friday and Cornell on Saturday. All games start at 7:00 pm EST.