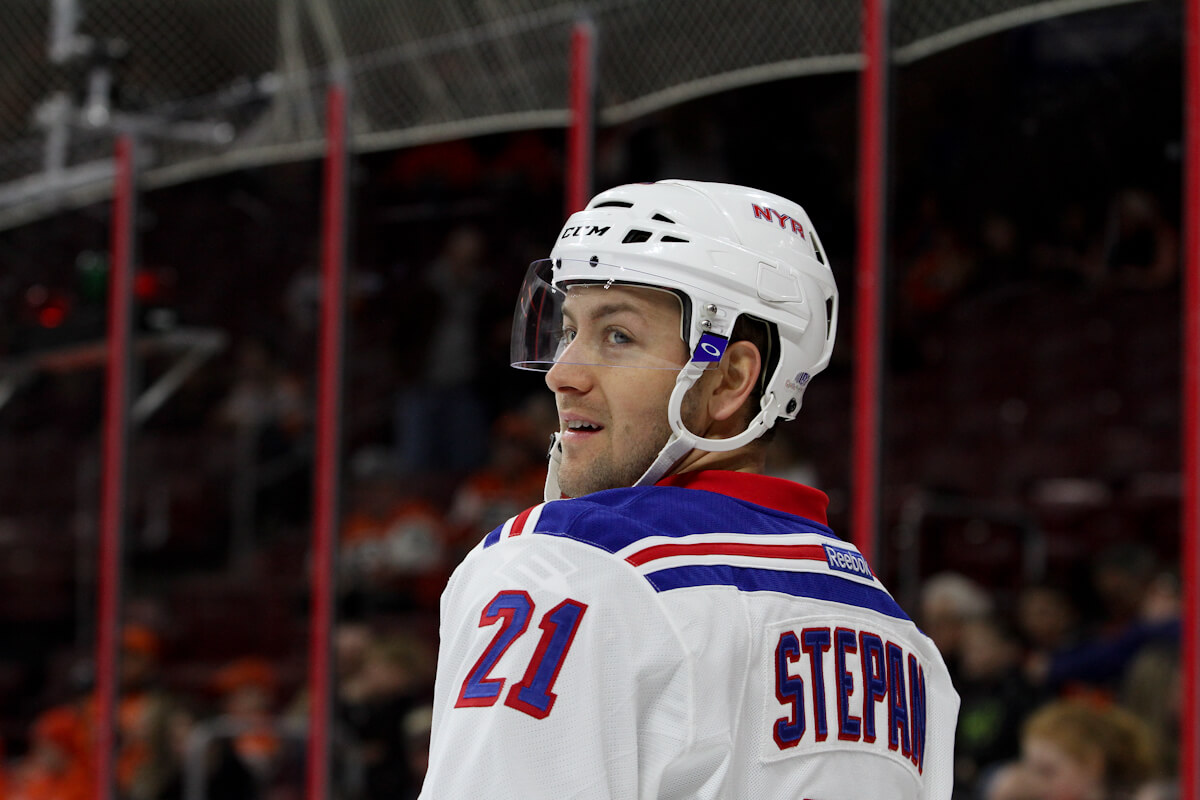 NEW YORK – The New York Rangers won their third straight game as Derek Stepan snapped a 1-1 tie at the 17:12 mark of period three to lead the Rangers past the Columbus Blue Jackets 2-1.

In a whirlwind 24 hours, the Rangers were able to complete a trade that brought Eric Staal to Broadway and battle out the pesky Blue Jackets in a contest that made today’s trading deadline look more exciting (you can sense the sarcasm).

Antti Raanta made 26 saves including 13 in the opening period to earn the number first star honors and give himself his second straight win. Raanta has now posted an 18-2-4 record in 27 career appearances at home.

Both teams exhibited sloppy play in the first period. The Blue Jackets who entered the contest with a 7-2-3 record in the month of February controlled much of the play in the opening frame.

That was until Mats Zuccarello (who else) was at the end of a long shift and put one off the back of Columbus’ netminder Joonas Korpisalo to draw first blood for the Blueshirts.

The middle 20 saw much of the same sloppiness. Columbus controlled much of the period and had several quality scoring chances. The Rangers were on their toes but were able to keep the Blue Jackets off the scoreboard.

Nearly four minutes into play of period three an errant pass by Dan Girardi gave Cam Atkinson a breakaway and he capitalized on it to equaled the score at 1-1.

The third continued with both teams trading chances but both goalies stood tall. The Rangers had gotten a powerplay opportunity less than three minutes after the tying goal but were unable to convert.

Marc Staal took a tripping penalty at 15:19 of the third period and gave the Blue Jackets a golden opportunity to pull ahead but instead it was the Rangers who would capitalize with a shorthanded goal by Derek Stepan.

The Rangers made their fans sweat it out with a last minute flurry by Columbus but were able to hang on even when the puck slid under Raanta after the buzzer had sounded.

When asked how his team’s overall game was Rangers head coach Alain Vigneault said, “In looking at my whole group I thought we were OK. There’s no doubt I think we can play better than we did; but I don’t want to take anything away from Columbus. I think that’s a better team than their record.”

Eric Staal made his Rangers debut and saw just under 16 minutes of ice time that included nine face-off wins. He described his overall feeling by stating, “I had some butterflies, but they were good butterflies. I think it was just the adrenaline, the excitement at this opportunity joining a great team.”

“When I put the jersey on, it was very blue compared to a lot of red,” Staal said. “It was a little different, but it felt real good. It was fun to start here. The group welcomed me with open arms and I’m just excited to get comfortable and go.”

As for the game-winning hero, Stepan described the winning goal by saying, “It was a great play by (McDonagh) and I’m able to jump up into a situation with just me and the goaltender. I took a look up and took my chances on beating him to the back pipe.”

The Rangers will have a couple of days off before they play back-to-back on the road; Thursday at Pittsburg and Friday in Washington.

The team seems to be at ease and this is the group that will go forward with in their quest for yet another run deep into the playoffs and they’ll do it with all Staals aboard.

Dan Boyle tallied a point to put him one point away from 600 in his NHL career.

Mats Zuccarello registered 12 points in 14 games in the month February.

This was the Rangers first game on February 29 since 1988.