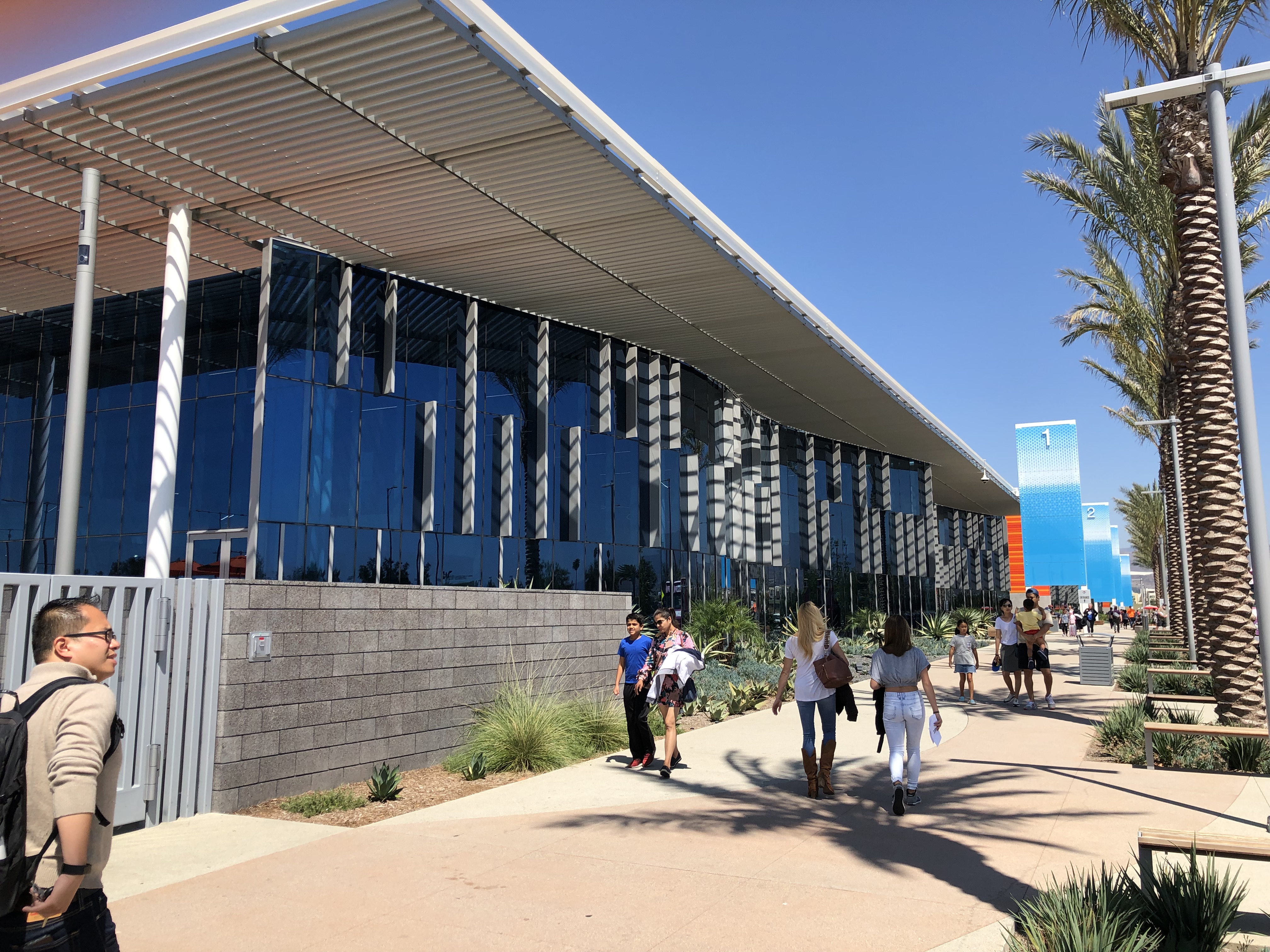 Six teams’ worth of rookies, around 150 altogether, gathered near Anaheim the weekend of September 7-10 to contest the 2019 Anaheim Rookie Faceoff tournament at the brand new Great Park Ice and Fivepoint Arena in Irvine. The facility has four ice pads, two of which were in use for this set of nine games between the Colorado Avalanche, Anaheim Ducks, LA Kings, San Jose Sharks, Vegas Golden Knights, and Arizona Coyotes.

The facility is first-class, with a moderne look outside and sustainable desert plantings adorning the walkways, palm trees stretching up overhead. It’s California, until you get inside, where the building is kept as chilly as an arena on the Prairies in winter. Good for the ice. Not good for those who didn’t bring a sweater. Forewarned is forearmed! But being inside was a great relief from the muggy late summer (in September) weather still hanging over SoCal.

One of the ice pads has seating for 2500, full to the max for Saturday’s late-day LA-Anaheim tilt. In the end, the host Ducks won 4-1, but a small consolation for the Kings was that every goal scored by the Ducks players came off the stick of someone with at least some NHL experience.

In fact, of the six teams, the Ducks had by far the most NHL games played, somewhere north of 250. The Kings had just a handful. Some of the teams in the tournament had no player with any NHL games played.

Some quick impressions after Saturday’s games: The Ducks have some excellent young talent maturing at the same time. Bet on seeing the trio of Max Comtois, Sam Steel, and Troy Terry together in the NHL this season. They could change the fortunes of the team around in a hurry.

The Kings Blake Lizotte, penciled in on the third line for game one, moves the puck well, especially in tight traffic in the slot. Rasmus Kupari is listed at 6’1” and 188 lbs. That’s gotta be a while ago. He appeared much larger than that. Also for LA, Brad Morrison, who played last year in the AHL with the Reign (50 games, 20 points), has no fear coming down the middle.

The Colorado team looks to be made up of skilled players. They skated rings around Vegas, who didn’t look all that skillful much of their game. The Avs’ first-rounder, Bowen Byram, showed himself. Martin Kaut, a forward from the Czech Republic, also was noticeable.

For the Golden Knights, Cody Glass was the standout. He’s not afraid to shoot from any angle. One chance came from near the goal line. He somehow got the puck to travel in on the goaltender as if it had been shot from the bottom of the faceoff circle.

The Sharks’ youngsters, like the Avs’, are very skilful at moving the puck. They played the Coyotes. The word for that team might be “plodding.” San Jose, though, might be said to be developing their young talent as a reflection of their NHL game. Good idea to make the transition for their young players seamless.

For the Coyotes, the move to trade up and grab Victor Soderstrom gave them a player of note. He was the standout on his squad.

As mentioned, fans packed the 2500-seat arena for the Kings-Ducks, the third game of the day, commencing at 5pm. The Ducks put on a show, and the stands had the t-shirt canon and the mascot, Wild Wing, in full swing. Music blared between plays. It felt something like an NHL game and a lot like being at an OHL game in a place like Oshawa, with most in attendance wearing logo gear and everyone following every play. It didn’t hurt that every seat in the house is but feet from the action.

The fans out West are as starved for hockey as anyone else by this point in the off-season, so the tournament, which plays on Sunday and then takes a day off and resumes Tuesday, is a welcome reminder that the NHL pre-season is just a week away, as well as being a glimpse at the future strength of the Left Coast teams and their stars.