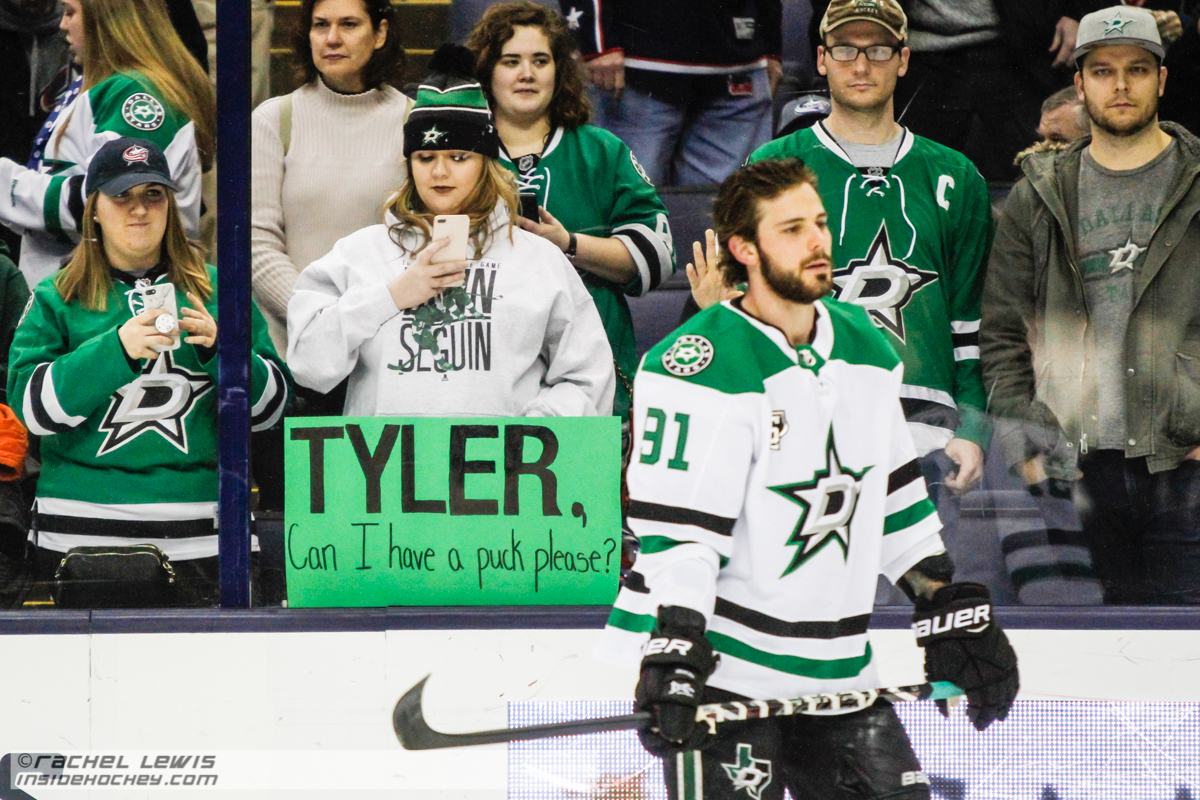 Tyler Seguin (DAL - 91) has a couple of fans in Columbus.

You can bet your last remaining Tyler Seguin- or Jamie Benn-autographed hockey stick that Dallas Stars fans are disappointed at being on the outside looking in as the NHL Stanley Cup Playoffs heads into the next round.

Ken Hitchcock’s skaters looked like a sure thing for frenetic, exciting post-season play as late as March 9 with the fifth-most points in the Western Conference and the first wild card spot (7th place). They had amassed 80 points after 66 games.

However, they went into a 1-7-2 slump, including an 0-6-2 during a road trip, finishing 42-32-8 with 92 points. Despite winning three of their last four games, they still finished three points behind the Western Conference’s 8th seed, Colorado after having been mathematically eliminated on the next to last Sunday of the regular season.

After a brief period of soul searching, Hitchcock – the NHL’s third winningest coach in league history with 823 triumphs – stepped down as bench boss to move into an advisor’s position per his long-term contract he signed prior to the season. Hitchcock is on a multi-year deal with the Stars that includes him moving into an advisory role once he was finished with coaching.

Hitchcock, who led the Stars to the 1998-1999 Stanley Cup, also coached in Philadelphia, Columbus and St. Louis. He was credited with altering his defense-first philosophy during his second stint in Dallas, but it’s still no match for the contemporary offense-obsessed NHL. Many teams across the league are incorporating more skilled players into their third and fourth lines and  relying on quicker, puck-carrying defensemen.

The Stars hired Hitchcock last April in hopes of rejuvenating a team that had missed the playoffs in 2016-17 and finished with just 79 points, their second-lowest total in a full season since the team moved to Texas in 1993. The team still missed the playoffs for a second straight season and for the third time in the past four seasons. In fact, Dallas has reached the playoffs only twice in the past 10 seasons and did not advance to the second-round on either occasion.

Despite the disappointment of missing the post-season, Stars general manager Jim Nill said there was a lot of growth under Hitchcock, particularly its defensive play. One of the league’s worst teams in goals against in 2016-17 (29th at 3.17 per game), the Stars tied for sixth this past season at 2.71 per game. “I think what Ken Hitchcock has done in this one year, the wealth of knowledge, how to play the game the right way, for our young kids to understand what it takes to win, I think that is big,” Nill said. “I think our next staff coming in is going to be rewarded because of it.”

The Stars’ coaching search will be intriguing, and may include veteran NHL bench bosses such as former Dallas and Phoenix mentor Dave Tippett, former Stars, ex-Vancouver and Flames head man Glen Gulutzan, former Texas Stars and Canucks head coach Willie Desjardins, and former Rangers coach Alain Vigneault (whom they considered in 2013 before he accepted the Rangers’ offer and Dallas turned to Lindy Ruff).

Nelson, the head coach of Grand Rapid of the American Hockey League (Detroit’s top affiliate), is familiar with Nill after having played and served as an assistant coach for the Griffins. (Nill came to Dallas after spending 20 years with the Detroit organization). Nelson, who also led the AHL’s Oklahoma City Barons, served as Edmonton’s interim head coach for 51 games in 2014-15. The 48-year old Nelson guided the Griffins to last year’s AHL Calder Cup title and has the team back in the playoffs this season. He likes to employ an aggressive forecheck and favors a puck control system.

Montgomery, whose 21-year professional playing career as a center for St. Louis, Montreal, Philadelphia, San Jose and Dallas, nearly landed the Florida job a year ago. He cut his coaching teeth as an assistant at Notre Dame and RPI from 2005-2010. After a three-year stint as head coach of the USHL’s Dubuque Fighting Saints, he compiled a 125-57-26 mark at the University of Denver, including the 2017 NCAA title. Montgomery favors puck possession and pressure. As a Flyers player in 1995, he coined the Legion of Doom moniker for the Flyers’ famed Eric Lindros-Mikael Renberg-John LeClair line.

Keefe has risen quickly through the coaching ranks. The 37-year old’s playing career ended in 2005 thanks to a knee injury, and he coached at Pembroke (CJHL), Sault Ste. Marie (OHL) and is 51-18-4 in his third year as head coach of the AHL’s Toronto Marlies. He has a reputation of being good with youngsters and veterans.

Nill said he is going to conduct a wide-ranging search and look at all options, including candidates with NHL experience and those whose experience comes at other levels. Nill said he would consider people within the organization as well. “We’re looking for a winning pedigree. We want to play fast. We want to play hard. We want to be very good defensively,” Nill said. “We are going to look at all different angles. I want to be pretty open-minded about this. You are seeing some success with young coaches coming in, and there are some successful coaches out there that have great resumes. The game is changing, and you have to evolve, and I think it is important that we look at every option.”