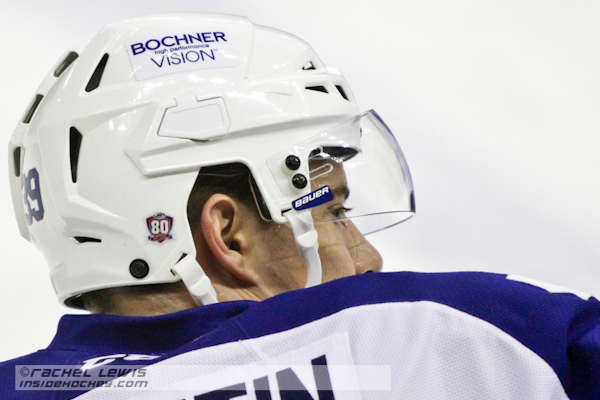 For the third time in this riveting American Hockey League Calder Cup championship series, the Texas Stars came up with a gutsy effort to tie the series.

Veteran goalie Mike McKenna (14-7) threw up a veritable wall against a well-fortified, swarming Toronto Marlies offense en route to making 43 saves, and the Dallas Stars’ top farm club took control on the road by scoring three goals in the second period en route to capturing Game Six, 5-2 before a screaming record-setting sellout crowd of 8,783 at the Ricoh Center.

“We wouldn’t have gotten out of the first round without (McKenna, because) he’s been lights out,” said Stars team captain Curtis McKenzie. “He went on a run last year (to the Calder Cup Finals with Syracuse) and he’s brought that same mentality to this year’s playoffs. He’s been our MVP.”

The series, deadlocked at three games each, will end one way or another in Game Seven on Thursday night with a 6 p.m. (EDT) opening puck drop at the Ricoh Center. The winner will capture the 2017-18 Calder Cup championship, and Texas can become the first team in league history to win the title by capturing the last two games on the road.

“We’re done growing,” Toronto coach Sheldon Keefe said. “It’s time to play and get it done. We’re excited for a chance to play, (for the Calder Cup). We earned the opportunity (with the Game Five win in Texas) to have two cracks at this. We’ve got to dust ourselves off, recognize what went really well for us in the first period, and what didn’t go so well for us after that. We’ve got an opportunity now to play in a one-game shot on home ice for a championship. We’ve got to get our team’s mindset right and recognize we have a great opportunity.”

The Stars are making their third trip to the Calder Cup Finals in their nine-year history. They lost in six games to Hershey in 2010 and defeated St. John’s in five games to claim their first Calder Cup in 2014.

The Marlies are trying to bring Toronto its first men’s professional hockey championship since the Maple Leafs captured the Stanley Cup in 1967. They also are hoping to become first Maple Leafs farm team to win the Calder Cup since the 1981-82 New Brunswick Hawks, an affiliate they shared with the Chicago Blackhawks. The last time an AHL team fully stocked by the Leafs won it all was the 1967-68 Rochester Americans.

The Stars, who finished 22 points behind the Marlies in the regular season, have answered each Toronto victory with one of their own. “Well, we’ve seen them come back now after we’ve won,” said Toronto center Colin Greening.” They’ve won in (our) building and so obviously they aren’t going away. At the end of the day we’ve got to win one game and it’s not going to be easy.”

Toronto outshot the Stars, 45-23, but McKenna was – simply put – superlative between the pipes. The 35-year old netminder, who made two appearances with the parent Stars this past season, stopped all 16 shots thrown at him during a raucous first period. As a result, McKenna avoided a repeat of a 6-2 loss in Game Five in Texas when he was chased from the game after allowing two goals on Toronto’s first three shots and five red lights through 40 minutes.

“We carried the play for long chunks of (time), but they didn’t gift us anything,” said Toronto coach Keefe. “We had a dominant first period, but we didn’t score. You have to be able to score to win, obviously. When you come out of that first period, and you don’t have a goal to show for it — I thought we got too comfortable (with) how easy the game might be. But the game shifted. They’re a team that’s opportunistic, and they make you pay.”

The Stars finally broke through less than seven minutes into the second period when left wing McKenzie converted a pass from center Justin Dowling and beat Marlies goalie Garret Sparks for his league-best 11th goal of the playoffs. Dowling also set up the Stars’ second goal by intercepting a Marlies clearing pass and feeding center Travis Morin, who made it 2-0. Stars’ center Austin Fyten increased his team’s advantage to 3-0 by out-muscling a Marlies forward for the puck at the Toronto blue line, skating in and beating Sparks.

“(Our line has) done it before,” said McKenzie. “Morin, Dowling and I have really tried to push each other this playoff series, because we are the guys who have won in Texas. You’ve been through situations and you see different things and you just have to make sure you are playing the right way and saying the right things to make sure the guys are following you.”

Toronto defenseman Calle Rosen, a two goal scorer in Game Five, cut the lead to 3-1 early in the third stanza when his wrist shot from the top of the left wing faceoff circle beat McKenna through rush hour traffic. But Texas center Sheldon Dries answered with his 10th of the playoffs, a shorthanded tally just 91 seconds later to make it 4-1. The goal also chased Sparks (13-5), who yielded four goals on 17 shots. He was replaced by Calvin Pickard.

“We didn’t do (Sparks) any favors,” said Keefe. “The second goal he wants to have back. But we weren’t very good on the first and third goals. And we didn’t give him any help on the fourth goal. It’s not on Sparks by any means. We gifted them goals.”

Toronto defenseman Justin Holl made it 4-2 with just under five minutes left in regulation, but Stars’ right wing Colin Markison hit an empty net with 3:32 left to start an early exit from the Ricoh Center. McKenna made 19 stops in the final period and earned First Star of the Game honors.

The Stars did not have a power play, while the Marlies were 0-for-4 and fell to 1-for-16 in the series. The last Calder Cup Finals series to go seven games occurred in 2002-03 when the Houston Aeros beat the Hamilton Bulldogs.

The Calder Cup is named for Frank Calder, the first president of the NHL (1917-43) and one of the driving forces behind the formation of the American Hockey League.