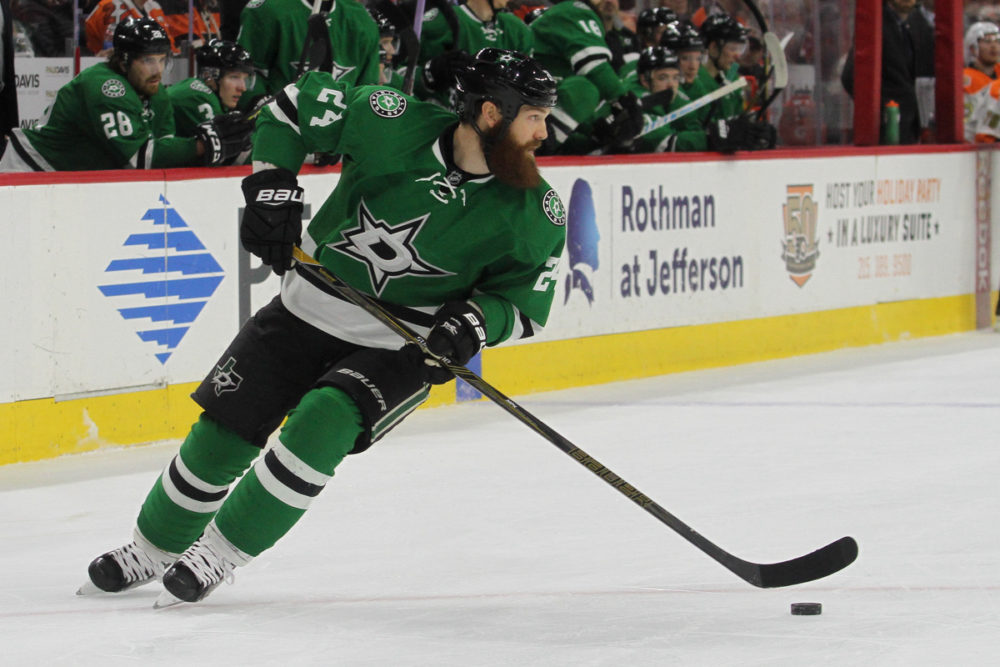 The second half of this season’s “Lindy Ruff Reunion” sent the Dallas Stars to victory, and the coach’s current team showed an ability to come from behind, and to hold off an opponent’s furious comeback.

Truth be told, things were looking very bleak for the Stars (whom Ruff has coached since 2013-14) at the outset of their final game heading into the All Star Break on Thursday, January 26 against the visiting Sabres (whom he coached from 1997-2013). Ruff’s former team held a 2-0 lead on goals by Evander Kane and Matt Moulson during the first half of the opening stanza. It was the seventh straight game in which Dallas had allowed the first goal.

Fortunately for Ruff’s current team, the green shirts managed to rally for four goals and hang on for a much-needed 4-3 triumph over the Sabres in front of an appreciative, much-relieved American crowd.

The Stars entered this contest after having lost in their first shootout of the season, 3-2 against visiting Minnesota, as well as a 4-3 overtime verdict to Washington at American Airlines Center despite playing well in both games.

“It’s a lot better leaving the rink with a couple of days off after a win then it would have been going the other way,” said Stars forward Patrick Sharp, who supplied two of his team’s red lights. “I think the last week or so we have played really good hockey and probably haven’t gotten the results we have been looking for, but if we play that way good things are going to happen. It’s been an up-and-down 50 games (this season). We haven’t hit our stride that we’re capable of. The last three, four, five games we’ve played really well. Hopefully, that’s a sign of things to come. It’s just a matter of stringing some games together and staying within striking distance.”

The Stars outshot the Sabres 37-27 in avenging a 3-1 Buffalo triumph in western New York back on Martin Luther King Day (January 15).

“Give (the Stars) credit for digging in, fighting back,” said Ruff, whose team improved to 20-20-10 on the season and are to within three points of the final playoff spot in the Western Conference. “We got down by a couple, and I thought we did a good job getting back in it.”

The entertaining matchup included three video reviews, one of them lasting four minutes and another that was conducted after the final horn had sounded and players had left the ice. Each of them went the home team’s way, including the latter video examination that enabled the referees to confirm that Buffalo did not tie the game with just :11 remaining.

Sharp started the Dallas comeback with his fifth goal of an injury-interrupted season just a minute and a half after Moulson’s marker. Team captain Jamie Benn tied the game at 2-2 on a power play with his 13th of the season less than a minute into the second period. Sharp added his second of the game midway through the second off an impressive long rush, and sniper Tyler Seguin provided insurance with his team-leading 18th marker just over two minutes later to make it 4-2.

“He’s starting to look like the old Patrick Sharp,” said Ruff, referring to Sharp’s four goals in his last five games. “He got rewarded tonight with the first shot finding the hole and the second shot was a really good effort getting up ice and putting it in the right spot.”

Kane’s second of the night with just :05 left in the middle session brought Buffalo to within 4-3. The Sabres (20-19-9) outshot Dallas 16-2 in the third period but could not beat goalie Kari Lehtonen, who made several outstanding stops to snap a three-game Buffalo winning streak.

Antti Niemi got the start in goal but was pulled following the first period after allowing two goals on five shots. Lehtonen played the rest of the way and stopped 21 of 22 shots.

While the veteran coach and Sabres’ all-time leader with 571 victories appreciates facing his old team, he actually fears them more now than before. “(Coaching against) Buffalo’s always going to be special,” Ruff said before the game. “I’m at the point where I don’t want to play them because I think they’re a lot better team now. They’re scary games. They’re tough games.”
The Stars resume their playoff quest this Tuesday when they host Toronto at American Airlines Center.