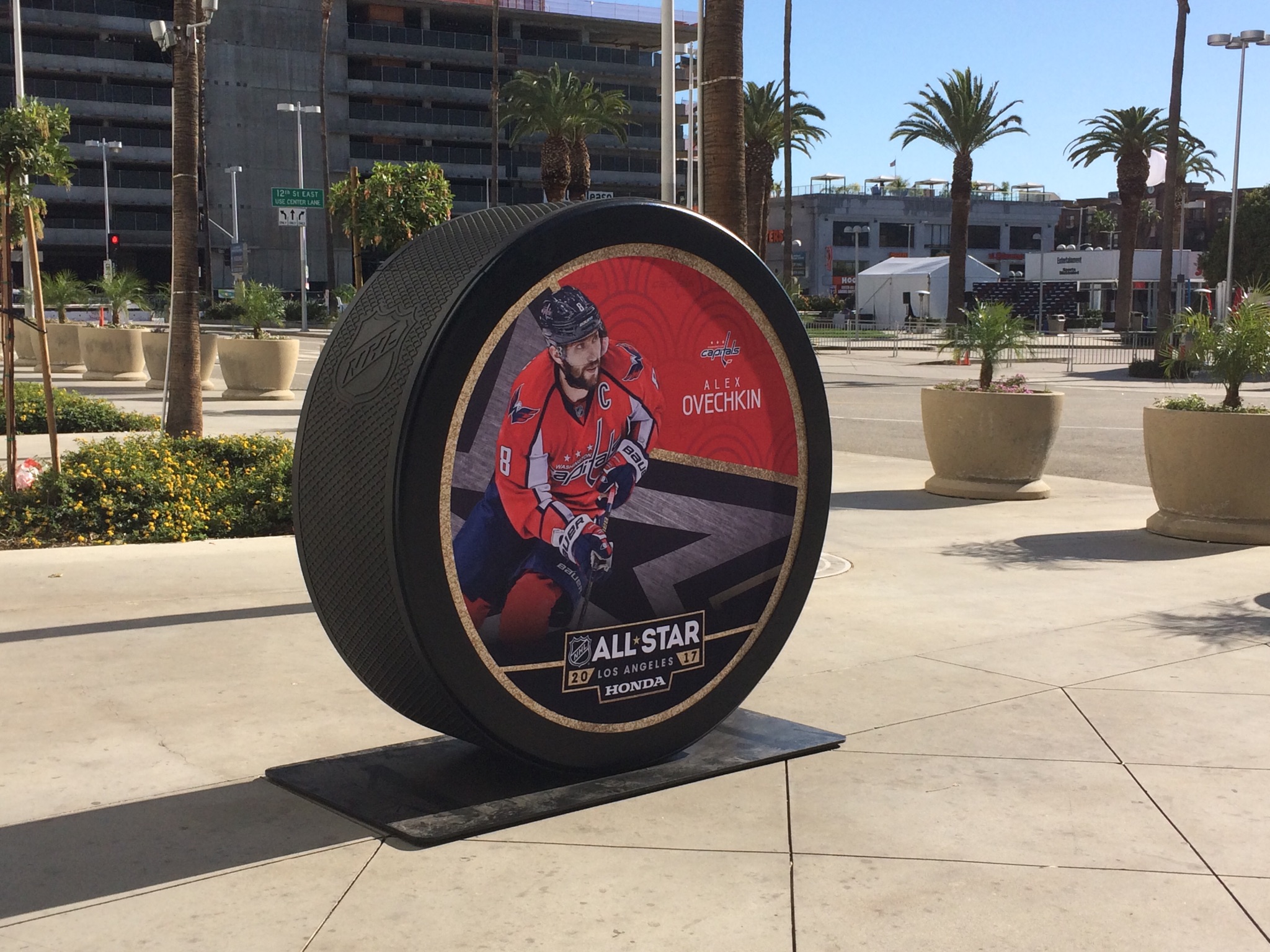 Something Pucky Going On

“So much to see and do.” What a cliché, but how true of deep downtown LA, where the NHL All-Star game has taken over. And it’s not like nobody noticed.

Where else could you see palm trees and Alexander Ovechkin on a giant replica puck set against the background of soon-to-be overpriced fancy new condo buildings?

Friday night with the remainder of the NHL 100 Greatest players being revealed, fans knew where to go. Outside the official hotel of the weekend, across from the arena, there was a gauntlet of hockey lovers standing on either side of the walkway. Their hands grasped a veritable bounty of merch, from sweaters to photos to magazines. Anything, in short, that a player could put a sharpie to and leave a little bit of forever behind.

The same was true after the reveal of the last 67 of the greatest of the great. The door the media exited was the same one that anyone who had been on the stage took to leave. So right in front of me bounded Marcel Dionne up the stairs, accompanied by Mrs. Marcel. They went out through the metal detector, rather than bypassing it, and they beeped it. But they were in for a bigger surprise when they pushed the door open—more people.

Even if you were downtown for one of the other two big (cough) events happening in that area—the California dental professionals conference (interesting) or the Classic Auto Show (actually quite interesting—flip on over to LaCar.com for coverage I’m doing along with other people)—you couldn’t help but know something pucky was going on. There were, in fact, giant pucks with the likenesses of players on them around the arena. Banners hung about. The arena itself is resplendent with signs reminding fans that this ain’t just any old hockey game being played here Sunday.

And inside the Convention Center, more goodies. The fan fest was still jumping when I left as it closed at 10pm. Many hockey wishes could come true for anyone who ventured inside. There was everything from table hockey to ball hockey being played. There were many different skills competitions being tried. Some of those: you get to shoot and see how fast; you get to shoot and see if you can hit the targets, just like the NHL players do (OK, so not Styrofoam that explodes, but same idea); drills where you have to stickhandle through obstacles; more shots games with replica goalies standing in the way and the only places to score to pick the corners. And more.

You could buy souvenirs. Man, did they have t-shirts. Those were general All-Star ones, Conference-specific ones, kids sizes, and on and on. There were several different pucks to buy, from replica ones to official game pucks, all emblazoned with this year’s logo. And then mini-pucks, a glorious bargain at under two bucks.

Oh, and cards—new ones, recent ones, and a few vintage. Please don’t get there early Saturday and grab the Bobby Orr I have my eye on. Or do. The vendor was a super-nice guy, and I already have one. But his is graded higher.

The spirits were high. Somebody was either giving out or selling cardboard replica helmets, and seemingly all the adults had one on as they went from area to area, kids in tow or not.

In fact, what struck me more than anything was that this is like the Comic Con of hockey—the chance for adults to act like kids, wearing their gear, donning a goofy helmet-like thing, and celebrating all that’s fantastic about loving the NHL.

WAIT! I almost forgot. The Stanley Cup, along with all the other trophies the league awards, was there. Is there.

The Skills Competition is Saturday afternoon (evening for you East Coasters.) Watch this space for my insights on that.