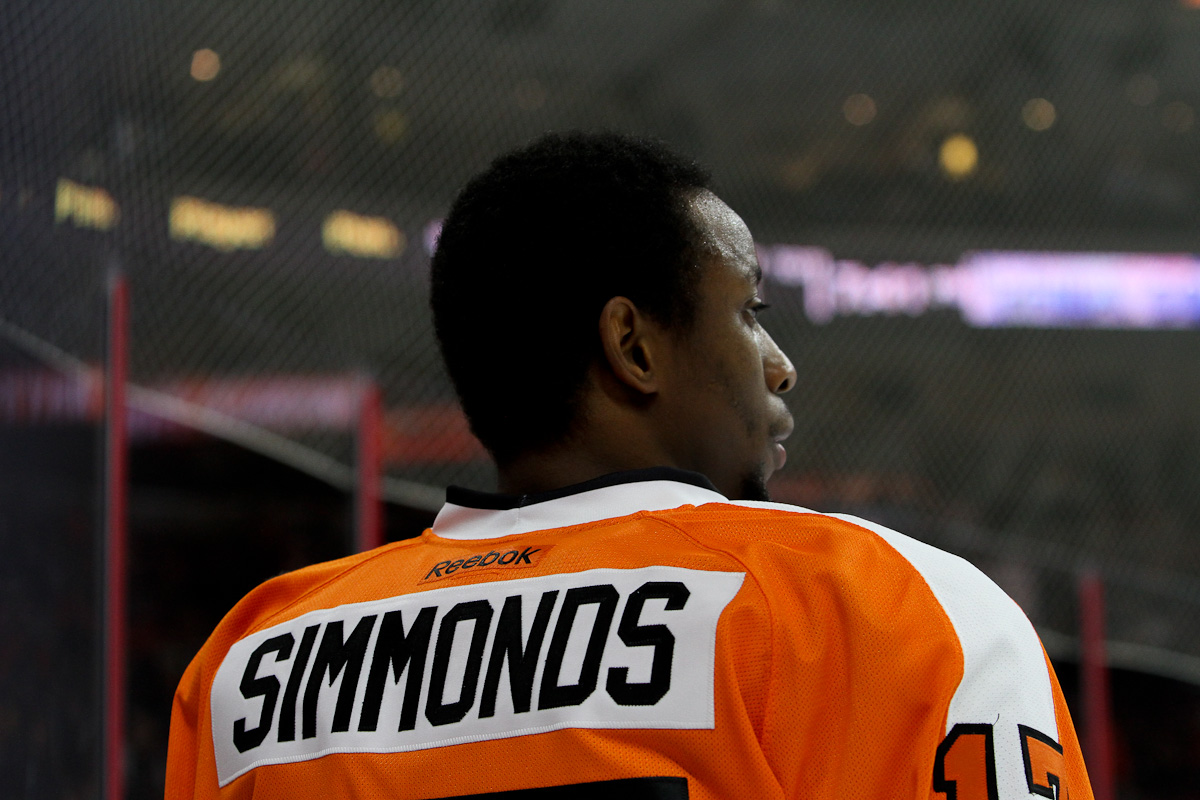 First All-Star selection of his career. Now first overtime game winning goal of his career. Wayne Simmonds is having an all around career year and is coming through in the clutch when his team needs it most.

Salvaging what would have been a devastating five-game homestand, the Flyers squeezed out the overtime win this afternoon against the reigning Western Conference champions and current Pacific Division leading San Jose Sharks. The Flyers ended the homestand with a 2-2-1 record. The last time the Flyers only had 1 win in a five-game homestand was back in January 1996.

Philadelphia came out strong to start the game out-shooting San Jose 14-4 in the first period. Wayne Simmonds had a great scoring chance to give the Flyers an early 1-0 lead midway through the first period by putting a nifty move on two Sharks defenders, cutting right through them, just to get robbed by Aaron Dell making the tremendous glove save.

The Sharks also missed out on an early goal opportunity when an initial Patrick Marleau goal was challenged and overturned by Flyers’ coach Dave Hakstol. Sharks winger Kevin Labanc had been screening Flyers’ goalie Michal Neuvirth when Labanc’s stick swung around and clipped Neuvirth, who couldn’t recover to stop Patrick Marleau’s follow attempt. Hakstol challenged for goalie interference and was successful.

Dave Hakstol was asked after the game how confident he was that Marleau’s goal was going to be overturned:

After the excitement of the first period, both teams went into the first intermission tied at 0s. The second period remained scoreless as well.

The Flyers finally lit the lamp with 13:38 remaining in the third period. Andrew MacDonald beat his defender for a clear shot at the net which dinged off the post on Aaron Dell’s stick side, but Ivan Provorov (his 5th) was there to collect the rebound and wrist a screamer that went top shelf over Dell’s glove side. Provorov talked about his goal after the game:

“We were cycling the puck in the offensive zone,” Provorov said. “Mac went down and shot it. Hit the post and bounced right back to me. I saw their guy was trying to get in the lane so I hesitated for a second and shot it.”

Shark’s LW Patrick Marleau (his 20th) got his revenge around 3 minutes later scoring the power-play goal off the assist from Kevin Labanc tying the game at 1s.

With regulation ending in a 1-1 tie, the Flyers wasted very little time capitalizing in overtime. Only a minute into the extra session, Wayne Simmonds simply took the puck away from Shark’s defenseman Brent Burns around center ice and was off to the races on the breakaway. Putting the moves on Aaron Dell, Simmonds was just able to get the puck over the goal line passed Dell’s left skate to give the Flyers the thrilling victory.

The play had to be reviewed, but there was no chance of the goal being overturned. Simmonds spoke after the game and praised Shark’s goalie Aaron Dell on his performance:

“Yeah, the goalie played great, Dell played great,” Simmonds said. “He made some huge saves for them tonight, he almost got that last one too. He stuck with it but, luckily it went in the net and we got the two points, that’s all that matters.”

With the game winning goal, Simmonds now has 23 goals on the season which leads his team. Brayden Schenn’s 16 goals is good for second on the team.

The common theme to this five-game homestand was the Flyers outplaying the opposition most of the games without scoring. Before today’s game, the Flyers had only scored one goal in its last three games. The loss to the Kings last Saturday, a 1-0 overtime final, was a game the Flyers should have won in regulation but was just not able to put the puck in the net. Dave Hakstol was asked to describe how he felt his team performed over the last five games at home:

‘This game had the same feel of a lot of games over this last stretch here,” Hakstol said. “It’s real close, tight, hard-fought games. A game we stuck with right from the drop of the puck, stuck with all the way through.”

The Flyers begin a three-game road trip up in Canada on Wednesday when the team travels to Calgary to play the Flames. If the season ended today, the Flyers would not make the playoffs with a 27-22-7 record.